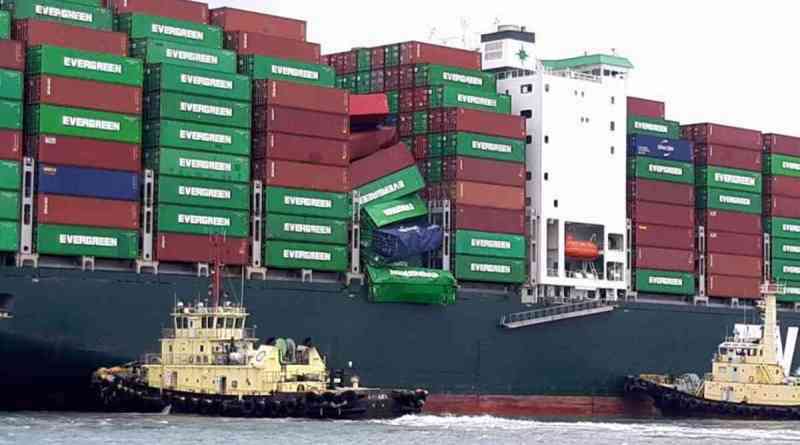 The Taiwanese ocean carrier Evergreen Marine announced Saturday that the boxship Ever Liberal lost 36 containers over the side in rough conditions off Japan.

A photo provided to United News Service by readers appeared to show that one container stack collapsed aft of the deckhouse, with one container still hanging over the side.

The UK-flagged Ever Liberal departed the port of Busan on December 30, bound for Los Angeles. According to Evergreen, she encountered strong winds and heavy seas in the East China Sea at a position about 20 nm to the southwest of Kyushu, the southernmost of Japan's large islands.

Weather data provided by Pole Star Global indicates wave heights in the vicinity of 18-20 feet at that time and location.

Evergreen reported that no seafarers were injured in the incident, and none of the lost containers carried dangerous goods. The Japan Coast Guard was notified so that it could alert shipping to the potential hazard of floating containers. The firm diverted the vessel to the port of Taipei, about 600 nm to the southwest, in order to offload damaged cargo and assess the damage. Evergreen said that it is also working to recover lost containers from the sea.

As of Sunday, AIS data showed Ever Liberal berthed at the port of Taipei.

Container losses at sea have drawn more scrutiny from regulators in recent years, thanks to a string of high-profile incidents. The massive cargo loss aboard the ONE Apus in the mid-Pacific last November may end up costing insurers and cargo owners as much as $200 million, according  to cargo claims consultancy WK Webster.