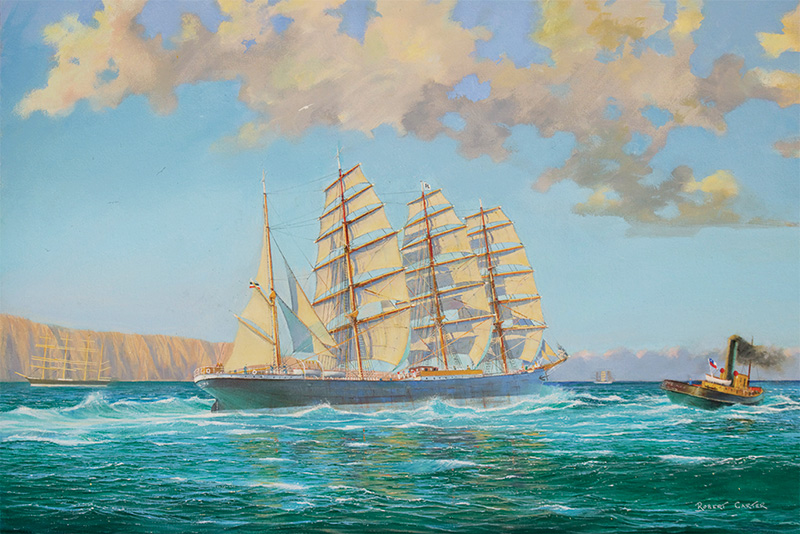 It is 1913 and the 4 masted barque Pekingputs to sea with 60000 bags of sodium nitrate in her belly, heading towards Hamburg, her home Port which she will reach in 84 days.

Peking was built by Blohm & Voss for the firm of F. Laeisz; a German shipping company, which had considerable interests in South America, particularly Chile and the nitrates that were mined there.

She was built in 1911, along with another 4 masted barque, Passat, at a time when the building of large steel sailing ships had ceased in other countries. Laeisz went on to order three more similar sailing ships: Pola 1916, Priwall 1917 and Padua1926.

All Laeisz ships were built to the same high specifications – which included steel masts and yards, double cap stays, triple topmast backstays, double jackstays, wire buntlines and balanced rudders. The Jarvis brace winch (designed in Great Britain) was adopted for all their vessels. They all had the raised midships deck which was a common feature of Laeisz ships.

All Laeisz ships were built to a similar design but Peking and Passat were true sisters, being built from the same hull plan, although there were small differences in deck layout and rigging.

When WW1 started, Peking was in Valparaiso and was interned. On returning to Germany at war’s end she was given to Italy in 1920 as reparations. Italy had no use for her and Laeisz bought her back in 1923.

They returned her to the nitrate run but the introduction of synthetic nitrates in the late ’twenties made this trade unprofitable. In 1932 she was sold to Shaftsbury Homes. This was a British institution that provided education and seamanship training for under privileged boys. She was moored in the Medway, partly rigged down and modified below deck to accommodate a large number of boys. She was renamed Arethusaafter an old wood frigate of the same name that had been used for the same purpose.

In 1975 a New York syndicate bought her for exhibition at South Street Maritime Museum. She was re-rigged but restoration was slow and in 2017 was bought by a German syndicate and taken back to Hamburg on a heavy lift ship where full refurbishment is now taking place.