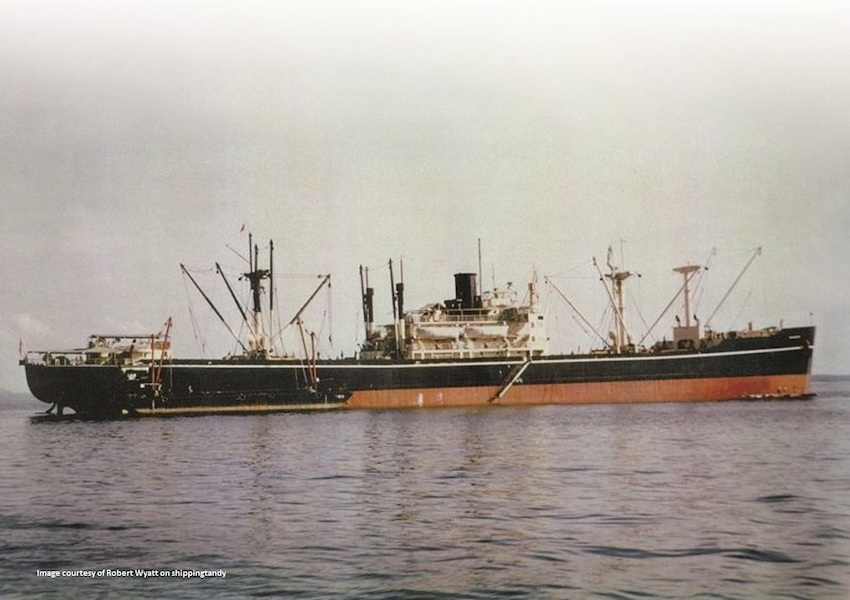 The “Nankin” was originally built as “Mount Holyoke Victory” at the Kaiser Richmond (former Permanente Metals Corporation) No. 2 shipyards at Richmond, California. Her keel was laid on 5th January 1945 and she was launched 6 weeks’ later on 17th February 1945. She was a standard mass-produced type VC2-S-AP2 Victory-class ship, one of 272 type AP2’s built during the war-years, of which 67 were built at the Kaiser Richmond No. 2 Yard.

Completed on 14th March 1945 for the U.S Maritime Commission’s War Shipping Administration, “Mount Holyoke Victory” was placedunder the technical management of marine division of the Alaska Packers’ Association transporting war materials and supplies both during the remaining months of the war and post-war until returned to the U.S Maritime Administration (MARAD) surplus to requirements.

In 1966, “Nankin” was sold, renamed “Bolina”, and placed under the Panamanian brass plaque flag/registry ownership of Universal Mariners Sociedad Anónima, and offshore company incorporated on 30th January 1963, the parent company (beneficial owner) of which I have not been able to track.

The “Bolina” (ex “Nankin” ex “Mount Holyoke Victory”) served under the registered ownership of this company for six years until 1972, when she was sold to Taiwanese shipbreakers Nan Kwang Steel & Iron Works, arriving at Kaohsiung on Boxing Day, 26th December 1971, to be dismantled after a lifespan of 27¾ years.