Inside the Last Journey of the ‘Carnegie’standard Ships 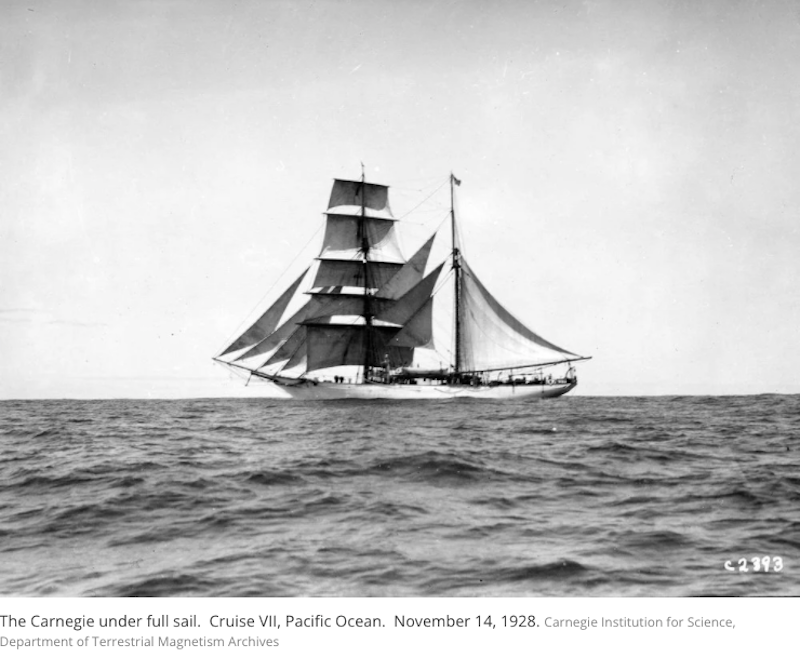 On a May morning in 1928, a crowd gathered on Washington, D.C.’s 7th Street dock to send off the scientific ship Carnegie on its final voyage in pursuit of mapping the Earth’s magnetic field.

It was the only ship of its kind. The Carnegie was built as a nonmagnetic vessel with minimal amounts of ferrous metals out of concern the materials would introduce inaccuracy into the on-board compass readings. Originally constructed in 1909, the 155-and-a-half-foot brigantine yacht was composed of sturdy oak and Oregon pine with a 122-foot foremast and nearly 13,000 feet of layered sails. The traveling laboratory was equipped with two glass-covered observation domes that enabled daily documentation of magnetic readings despite wind, rain and water careening over the deck. Other instruments recorded geophysical data from 37,000 feet into the sky to 20,000 feet below the ocean’s surface, collecting information about ocean depths, temperatures, air currents and atmospheric electricity.

Mid- and late-19th century technological advancements of telegraphs, telephones and electricity pushed the study of magnetism to the forefront of international scientific inquiry. It remained a prominent question as the Carnegie recorded thousands of magnetic readings over the world’s oceans to determine declination— or the angle between magnetic north and true north. The compass needle does not move in reference to the fixed point of geographic north, but rather to a magnetic north that shifts over time based on the Earth’s changing magnetic field. If a ship followed a compass heading from a century before, it would end up in an entirely different place. The Carnegie’s research was not only vital to correct navigational charts for mariners to avoid shipwreck, but to also collect geophysical data needed to explore how the Earth’s magnetic field moves and why.

Captaining the Carnegie was James Percy Ault, a respected scientist who dedicated a life-long career to the Carnegie Institution of Washington. He was born in 1881 far from any ocean, on the rolling fields of Olathe, Kansas. While studying at Baker University in eastern Kansas he met William Charles Bauer, a chemistry and physics professor. Bauer appointed Ault as one of his observatory assistants, likely noticing the young man’s intelligence, integrity, good humor and connection to the Earth.

Ault’s professor was also brother to Louis A. Bauer, the first director of the Carnegie Institution’s department of terrestrial magnetism, established in 1904. The Institution, founded two years prior by steel magnate Andrew Carnegie, aimed to support scientific discovery and provide resources for “exceptional” individuals. Upon graduating from college in 1904, Ault quickly moved to Washington and began his training with the department to delve into a dilemma that had plagued explorers for hundreds of years when using a compass to navigate at sea.

James Cook and Christopher Columbus often struggled with magnetic declination. One rumor suggests that in the night, Columbus would shift the compass card under the needle to prove to his crew that they were sailing in the right direction. Cook found himself frustrated with declination, logging in 1776 that “whoever imagines he can find the Variation within a degree will very often find himself much deceived.” At the turn of the 18th century, Edmund Halley, the namesake of the famous comet, recorded a magnetic chart of compass declination over the Atlantic Ocean while on voyages of the Paramour Pink. This was important as it was the first nautical chart of its kind but it was also unable to determine changes in the magnetic field as there were few other charts in which to compare.

In 1905, the Carnegie Institution commissioned a ship, the Galilee, to embark on the first journey since Halley to primarily chart the magnetic field over the oceans. At the age of 23, Ault served on board as part of the Galilee’s scientific staff. Four years later, the Carnegie would replace the Galilee.

The Galilee’s initial voyage marked the beginning of Ault’s calling to witness and share the Earth’s wonders. For the next 25 years, he sailed approximately 250,000 miles, writing more than 1,000 letters to his wife, Mamie Totten, and their daughters Evelyn, Ruth and Marjorie who lived in their Washington home. In a 1928 article for The Scientific Monthly, Ault explained: “Since we can not bring the earth into the laboratory and study its problems, we must go out over its surface, penetrate into its interior, into its atmosphere, and into the ocean depths as far as present inventive genius will permit, and observe and record the results of experiments which nature is performing on a cosmical scale.”

Between nautical voyages, Ault ventured into northern Mexico to conduct magnetic research on land and traveled through Canada, covering 1,600 miles by canoe, in pursuit of the department’s plan to complete a magnetic survey of the globe. Ault led land expeditions to Peru, Bolivia and Chile to continue the recording of magnetic measurements, and worked with aerial navigation for the Army during World War I. He graduated with a master’s degree from Columbia University in 1909 and embarked on the Carnegie’s first voyage that same year.

Magnetic measurements were taken daily on the ship using a marine collimating-compass, an instrument that incorporates the position and altitude of the sun to determine magnetic declination. In 1909 the Carnegie’s maiden voyage sailed from St. John’s, Newfoundland, to Falmouth, England, replicating an almost exact path of Halley’s expedition on Paramour Pink. Magnetic observations on the Carnegie determined that if Halley’s compass headings from 200 years ago were followed, the ship would have sailed to northwest Scotland rather than Falmouth, England.

Data was collected on the Carnegie’s seven voyages, including a particularly harrowing journey around Antarctica that departed in 1915. Passing 133 icebergs, Ault may have seen the brilliant aurora australis reflect off the frozen surfaces, yet in darkness the Carnegie sometimes crept up to undetected bergs sailing within a mile before the crew noticed them near the ship. The Carnegie was the first expedition to circumnavigate the continent in a record-setting four months, the same year Earnest Shackleton attempted to traverse the region. It was so perilous that the cook fell overboard on the rocking ship while emptying a pail of ashes and he was lost in the icy waters.

After the Carnegie’s sixth voyage in 1921, it was determined that maritime navigational charts had been corrected. The Carnegie and its captain spent the following handful of years out of the water, the ship in dry dock and the commander conducting magnetic research on land. The department then decided to recommission the ship for one more 110,000-mile voyage around the world to record both oceanographic and magnetic observations.

The Carnegie underwent repairs: new masts were erected, new rigging was installed, new scientific instruments were brought onboard and a new engine and radio were purchased.

The ship departed that May morning from Washington, traveling to England, Germany, Iceland, Barbados, Easter Island, Peru, Japan and San Francisco. Upon reaching various ports of call, Ault performed customary lectures and tasks. He visited local consulates and offices, obtained supplies, visited biology labs, made official greetings, opened the ship to visitors and journalists and sent copies of scientific findings to the Carnegie Institution. Collected specimens were likely sent to museums, including plankton samples now at the Smithsonian’s National Museum of Natural History.

While in San Francisco, his department with the Institution celebrated its 25th anniversary, opening the Carnegie’s decks to almost 3,000 visitors amidst speeches to honor the department’s scientific achievements. W.W. Campbell, astronomer and president of the University of California, said to the crowd, “The very great number of accurate observations secured on land and sea and in the air and water have priceless value for the human race.”

On September 3, 1929, the Carnegie and its crew of about 25 left San Francisco and set a course toward Honolulu and the South Pacific. In Samoa, crewmembers traveled to the grave of Robert Louis Stevenson and collected specimens, and the captain spent time in a village with new and old friends from previous visits, enjoying roast pig, taro, breadfruit and fresh pineapple. In the early morning hours, Ault went to see the palolos, a marine worm which comes to surface in swarms only a once a year in great numbers under a full moon.

While harbored in Apia, Samoa, on November 29, Ault pulled out a chair and read on the deck as the ship’s engine refueled with 55-gallon drums of gasoline. It had been 578 days since departing, and about 640 days left to go before Ault could reach a restful future at home with his family. As he read, an explosion rumbled from below deck. Wood splintered and cracked as flames circled the mast. Ault was thrown from his chair and into the ocean, where some of the crew spotted him in the water clutching a rope. “Boys, boys, where are you?” Ault said as the water lapped against him. The crew members managed to load their captain into a rowboat. He fell unconscious as the Carnegie continued to burn and smolder to the water line, exposing its wooden bones. The explosion sank the ship, and with it the Carnegie’s pursuit of oceanographic magnetic exploration. 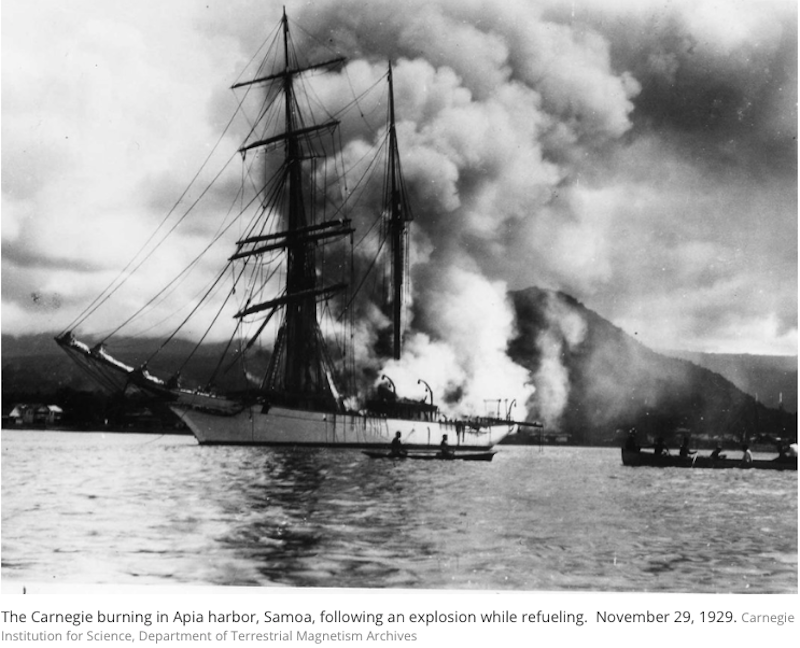 The ship was filled with 19 months of research, detailing an accurate geomagnetic mapping of the world created from cutting-edge oceanographic data and some of the first worldwide information about the Earth’s negative electric field. Most of the data had been copied and sent to Washington, so all was not lost, although the only ship of its kind in the world perished along with its respected captain who, according to the coroner, died of “cerebral concussion and shock” in Apia’s harbor immediately following the explosion.

Ault’s family met his body in San Francisco and traveled by train with him to Washington, where he was laid to rest in a Maryland cemetery. A eulogy by F.C. Reynolds recognized the captain’s qualities as a notable scientist, a skilled leader and a devoted father and husband who used his virtues for the quest of knowledge and truth.

Articles about the explosion appeared in papers all over the world. The Galilee and Carnegie had been foundational contributors in gathering more than 6,000 magnetic maritime recordings over the span of 25 years, furthering the international pursuit of geophysical understanding and collecting data needed for the scientific community to continue discoveries about magnetism and oceanography. Following the ship’s explosion, messages were composed from professors, doctors and scientists around the globe, including T. Wayland Vaughan, director of California’s Scripps Institution of Oceanography who wrote “The death of Ault, whom I think everyone who knew him held not only in the highest personal regard but also valued him for his scientific capacity, was an awful blow…the destruction of the vessel itself causing the termination of what in some respects was the most important oceanographic expedition of modern times.”