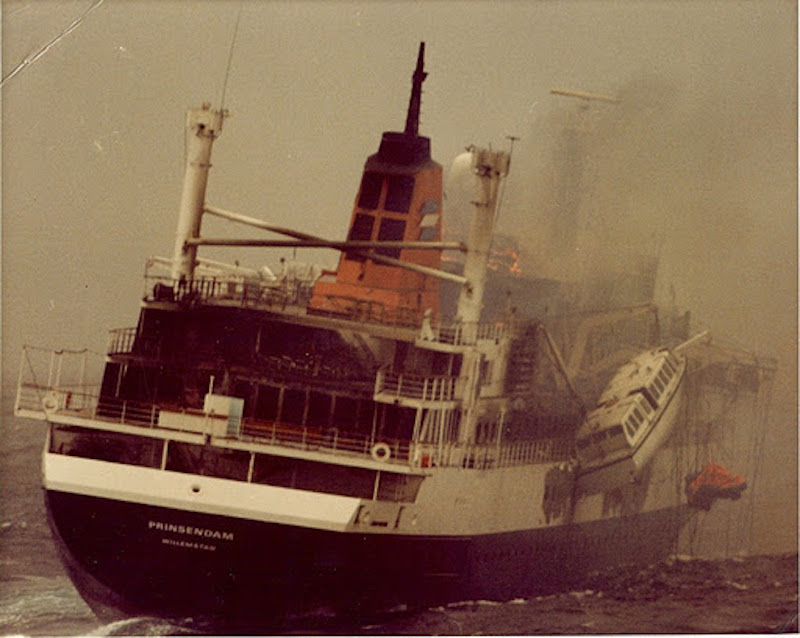 The cruise ship Prinsendam was built in 1973 for Holland America Line. It was somewhat smaller than average size for its day, carrying about 350 passengers and 200 crew. Just after midnight on 4 October 1980, a fire broke out in the engineroom as the ship was transiting the Gulf of Alaska. Shortly thereafter, the master sent a message to the US Coast Guard requesting assistance.

The ship was then 120 miles south of Cape Spencer and outside the range of USCG helicopters. The Coast Guard advised the master to send out an SOS, but he refused. The chief radio officer sent one anyway. Ships in the area responded, including the tanker Williamsburg and the USCGC Boutwell, which served as the on-scene coordinator. The master gave the order to abandon ship at sunrise.

The Coast Guard, Air Force, and Canadian Forces dispatched long-range helicopters, which carried persons from the lifeboats to the Williamsburg. The Prinsendam was taken under tow, but the fire could not be extinguished and the ship was listing heavily in deteriorating weather. Permission to bring the ship into sheltered waters was denied by the US Coast Guard, but probably had no impact, as the ship sank shortly thereafter. On October 11, 1980, the Prinsendam capsized and sunk, only 7 years after being built.

The Williamsburg brought 359 passengers and crew safely to Valdez.

There were no fatalities and no serious injuries.