THE SINKING OF NEWCASTLE’S IRON CHIEFTAIN AND IRON CROWN 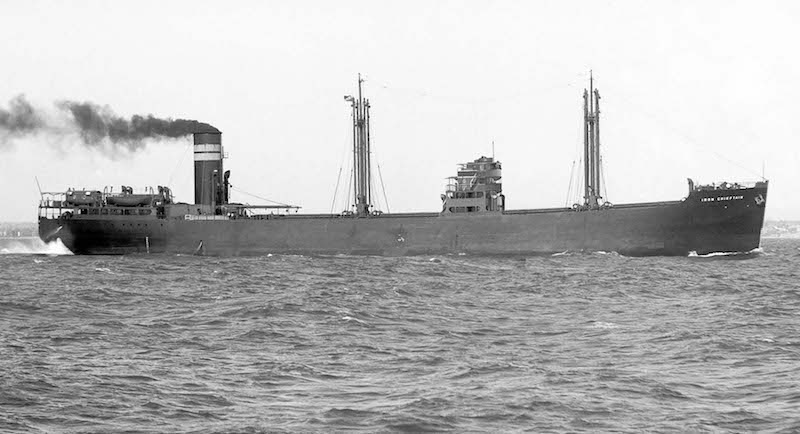 At 1100 hours 3rd June 1942 BHP’s Iron Chieftain sailed from Newcastle on her ill- fated voyage to Whyalla with her cargo of coke and ship building construction material for the ships being built at the Whyalla yard. Later that evening at 2240 hours while steaming at about six knots due to a heavy swell she was torpedoed and sunk by the surfaced Japanese submarine 1-24 in a position 27 nautical miles east of Sydney.

The following day, 4th June 1942 a second Newcastle crewed ship, Iron Crown, owned by Interstate Steamships Pty Ltd., was torpedoed and sunk by the Japanese submarine I-27 at 1645 hours in a position 44 nautical miles SSW of Gabo Island, Victoria while on passage from Whyalla to Port Kembla with a cargo of iron ore. The torpedo struck the deeply loaded ship on the port side abaft the bridge and the ship sank quickly in 60 seconds resulting in the loss of 37 of her 42 man crew. The five survivors were rescued by the British ship Mulbera. But for a judicious alteration of course BHP’s Iron King sister ship of Iron Chieftain would have been in the exact position to that of the Iron Crown and witnessed the sinking.

In the same area Adelaide Steamship’s Barwon had been attacked with gunfire and torpedoes at 0540 hours that morning by the same submarine 33 miles SSE of Gabo Island but survived.

The Japanese forces with their attack and sinking of these Australian Merchant ships in Australian waters heralded the first hostile act in which 28 ships were sunk or attacked off the East Coast.

The Merchant Navy barely receives a mention in popular WW 2 history except for HMHS Centaur.

The Forgotten and ignored Fourth Service.