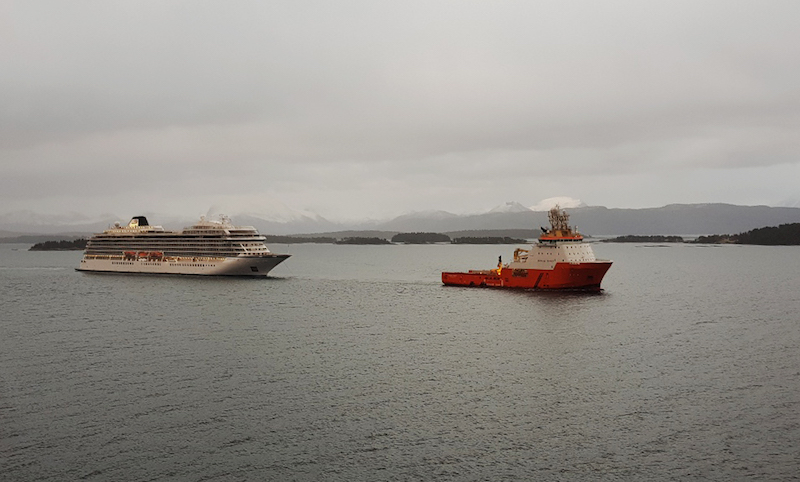 Low lubricating oil pressure is likely the cause of the engine failure aboard the 2017-built cruise ship Viking Sky, preliminary findings from the Norwegian Maritime Authority showed.

The authority has worked together with the ship’s classification society, Lloyd’s Register, and Viking Ocean Cruises in order to identify the reason why the Viking Sky suffered a power blackout at Hustadvika in challenging weather conditions on March 23.

“For the present, our conclusion is that the engine failure was directly caused by low oil pressure,” the parties said. The level of lubricating oil in the tanks was within set limits, however relatively low, when the vessel started to cross Hustadvika. The tanks were provided with level alarms, however, these had not been triggered at this time.

Heavy seas in the area probably caused movements in the tanks so large that the supply to the lubricating oil pumps stopped. This triggered an alarm indicating a low level of lubrication oil, which in turn caused an automatic shutdown of the engines, NMA explained.

The NMA granted the vessel a permit to sail on a single voyage to Kristiansund where the necessary repairs would be made. Viking Sky departed Norway’s Port of Molde in the early morning hours of March 27 under own power and with a tug escort, and arrived at its destination later that day, data from Marine Traffic shows.

Viking Sky had a total of of 1,373 passengers on board when it lost its engines. The ship sent out a mayday signal, triggering a massive evacuation mission which saw around 460 passengers airlifted by five helicopters.

The NMA has drawn up a general safety notice about ensuring a continuous supply of lubricating oil to engines and other critical systems in poor weather conditions.

“We have inspected the levels on all our sister ships and are now revising our procedures to ensure that this issue could not be repeated. We will continue to work with our partners and the regulatory bodies in supporting them with the ongoing investigations,” Viking Ocean Cruises said.