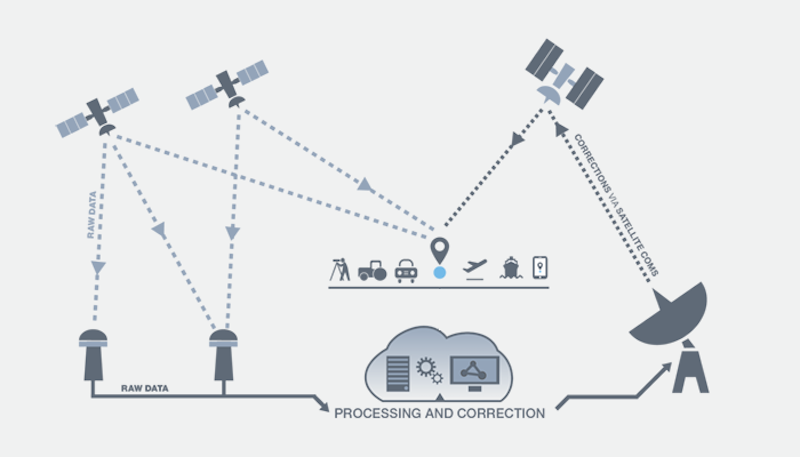 These days we are dependent on global navigation satellite systems (also referred to as GNSS) whether we realise it or not.

GNSS technology enables a vast range of things in our lives—as individuals, nations, and globally.The opposite page shows just how ingrained GNSS is in daily life.

For Australia, the latest improvement to GNSS is a trial of a Satellite Based Augmentation System (SBAS) which drastically improves accuracy and reliability of positioning data across the Australia and New Zealand region. The Australia–New Zealand region is one of the last developed areas of the world to de develop an SBAS.

With the first generation of SBAS already in use in other regions of the world, Australia and New Zealand are currently trialling a second generation SBAS, which offers even greater precision and reliability.

SBAS improves the accuracy and reliability of our positioning data by taking GNSS signals and fine-tuning them before broadcasting the corrections over the Australia and New Zealand region free of cost to the user.

To give you an idea of what this actually means, the Global Positioning System gives a positioning accuracy of approximately five metres. For a work boat that depends on accurate positioning for its work, five metres may leave a significant amount of uncertainty. However with SBAS enabled on our GNSS devices, the accuracy can be as good as one metre and a greater guarantee that this positioning information is correct.

Anyone with an SBAS-enabled receiver can benefit from the SBAS technology being tested during the trial, but the trial is focussed on evaluating the effectiveness and application of SBAS in nine industry sectors—agriculture, aviation, construction, maritime, mining, rail, road, spatial, and utilities.

The maritime industry’s reliance on satellite-based positioning is not just about accuracy in position. It’s also about reliable positioning information and more accurate measurement and monitoring of movement, heading, acceleration and deceleration of vessels and equipment.

In sectors where satellite-based positioning has traditionally been used—such as the oil and gas industry and commercial shipping—the added accuracy and reliability of SBAS offers significant benefits. Greater precision in oil exploration and the laying of undersea cables, and more accurate navigation for big ships in port—reducing the need for port development and dredging—are just some benefits.

The benefits of the SBAS trial are already available, free of charge. All you need is an SBAS-enabled receiver.