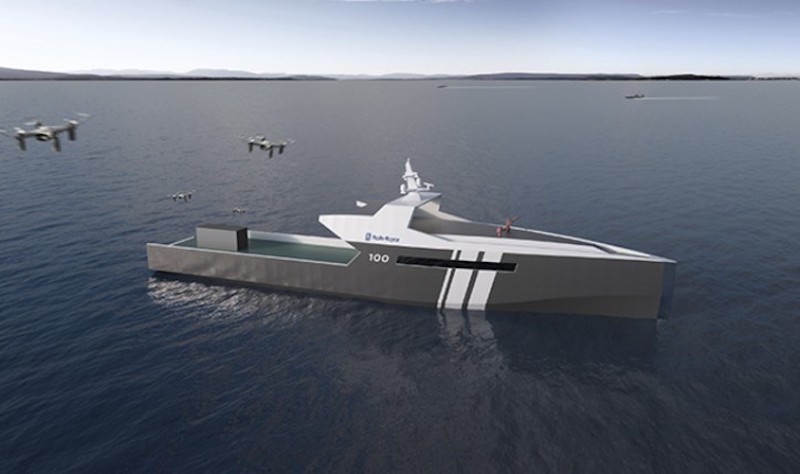 Rolls-Royce has revealed plans for an autonomous, single role, naval vessel with a range of 3500 nautical miles.

The vessel concept is capable of operating beyond the horizon for over 100 days, will displace 700 tonnes and reach speeds above 25 knots. The 60m long vessel is designed to perform a range of single role missions, for example, patrol & surveillance, mine detection or fleet screening.

At the heart of the vessel is a robust and reliable power dense propulsion system. This combines Rolls-Royce’s proven expertise in both gas turbines and diesels with a demonstrable track record in electric propulsion, energy storage and propulsors.

According to Benjamin Thorp, Rolls-Royce, General Manager Naval Electrics, Automation and Control,“Rolls-Royce is seeing interest from major navies in autonomous, rather than remote controlled, ships. Such ships offer a way to deliver increased operational capability, reduce the risk to crew and cut both operating and build costs.

“Over the next 10 years or so, Rolls-Royce expects to see the introduction of medium sized unmanned platforms, particularly in leading navies, as the concept of mixed manned and unmanned fleets develops. With our experience and capabilities we expect to lead the field.”

Larger manned ships will cover multi-role missions. Allowing fleet composition to be mixed in this way, navies will reap the operational and cost benefits offered by autonomous technology.

The initial design features a full electric propulsion system which requires fewer auxiliary systems (lubrication, cooling system etc.) and offers better reliability levels than mechanical counterparts. It features two Rolls-Royce MTU 4000 Series gensets providing around 4MW electrical power to a 1.5MW propulsion drive.  An alternative to diesel engines could be small gas turbines, further improving the system’s reliability and reducing onboard maintenance.  Permanent Magnet Azipull thrusters together with a bow mounted tunnel thruster will make the vessel highly manoeuvrable. To reduce fuel consumption and extend operational range an additional 3000 kWh of energy storage will facilitate efficient low speed loiter operations and the vessel will also be fitted with photovoltaic solar panels to generate power when the vessel is on standby.

The absence of crew increases the need for very reliable power and propulsion systems. Rolls-Royce’s approach is to blend advanced Intelligent Asset

Management and system redundancy in a cost effective manner that avoids sacrificing the cost and volume savings achieved by removing the crew. A suite of autonomous support tools, developed by Rolls-Royce, such as Energy Management, Equipment Health Monitoring and predictive and remote maintenance, will ensure the availability of unmanned vessels.

Many of the technologies needed to make autonomous ships a reality already exist. Rolls-Royce has created what it believes to be the world’s first Intelligent Awareness System combining multiple sensors with Artificial Intelligence, to help commercial vessels operate more safely and efficiently.

Autonomous technology presents an opportunity to automate certain parts of the ship’s operations and the partial removal of sailors reduces operating costs and improves safety by limiting the number of people exposed to hazards.