Norwegian crew on route to "Maud"

The tenacious Norwegian crew hell-bent on retrieving Roald Amundsen’s sunken ship, the Maud, off the coast of Cambridge Bay, is currently in Nuuk, Greenland, with a tugboat and a barge en route to raising the famed ship from its watery roost and floating her back to her European home.

According to their latest blog entry at maudreturnshome.no, the crew had a bumpy ride across the Atlantic Ocean after departing Farsund, Norway, on June 25, and expects to enter Nunavut waters within a week or so. Then they will ply the Northwest Passage in the hope of arriving in Cambridge Bay some time in early August — weather and sea ice permitting. “We are all well but pretty tired after fighting some unexpected heavy weather in the mid-Atlantic,” project leader Jan Wanggaard wrote in a July 13 blog post. “We had some minor technical damages, but considering the fact that we had winds in the upper scale of storm and waves up to 10 meters, we must be quite content and pleased to be well and fit here in Nuuk and also super-ready for the continuation of this journey. 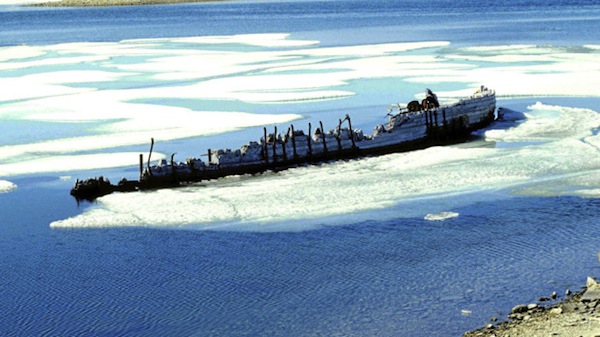 The Maud, known locally as the Baymaud, sank in its moorings in 1930 after Amundsen, the Norwegian polar explorer, tried unsuccessfully to sail it around the North Pole. It was built by Christian Jensen and christened in 1917 by Amundsen with a block of ice that he shattered against the bow proclaiming, “You are made for the ice,” according to the project description on Wanggaard’s blog.

Amundsen is still revered as a national hero in Norway and Wanggaard’s mission is to bring the Maud home, clean up what remains of her, and put her on display at a future Maud museum in Vollen, Norway.

Canada agreed to the ship’s repatriation in 2012 and issued an export permit for the Maud Returns Home group to raise what’s left of the 392-tonne vessel onto a barge and tug her across 7,000 kilometres of ocean. The ship was originally supposed to be transported back to Norway in 2013 but plans were delayed a year while Wanggaard’s crew waited to secure its tugboat, the Tandberg Polar, and have it inspected by Norwegian shipping authorities.

The marine voyage this spring has been challenging. “Chunks of ice, from small lumps up to major icebergs of more than 100 meters in height meant our attention had to be on full alert passing through a mix between thick fog patches and brilliant blue skies as we sailed near the coast up to Nuuk,” Wanggaard writes. “Now we look ahead and we will hopefully be ready to advance up the coast early next week. Next stop will be Upernavik [mid-way up the west coast of Greenland]. “This will be our last stop before we cross over Baffin Bay into the famous Northwest Passage, which will be our last major challenge before finally arriving Cambridge Bay.”