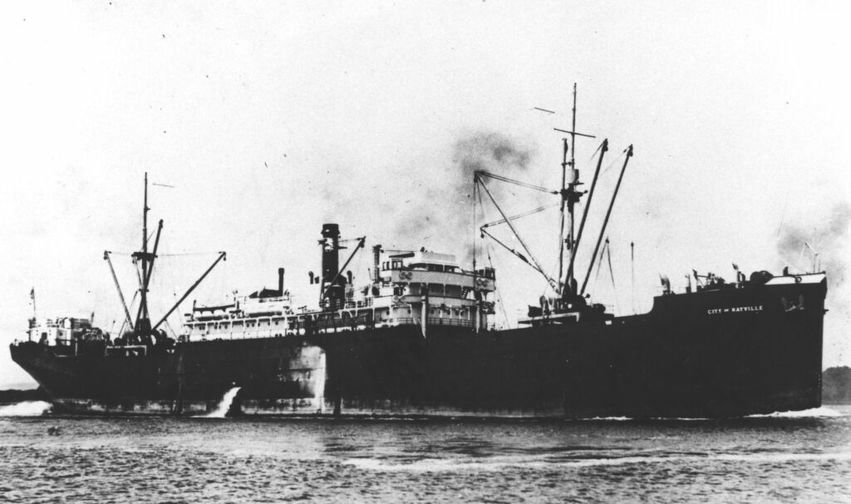 MV City of Rayville hit a mine in Bass Strait.  She was the first American vessel sunk during World War II, sunk by a German mine off the coast of southern Australia.

Over three nights in November 1940, the German minelaying ship Passat, a captured Norwegian tanker, had strategically planted 110 sea mines in Bass Strait, a busy trade route between Tasmania and Victoria. This field of mines had already claimed the British steamer SS Cambridge (1916) less than 24 hours previously off Wilsons Promontory.

On 8 November 1940, City of Rayville sailed into the Bass Strait with a cargo of 1,500 tons (37,520 bars) of Port Pirie lead. At 7:47 pm the ship hit one of the mines. The explosion was powerful enough to rip out the foremast, as shrapnel and ingots of lead rained down on the ship's decks.

The 38 crew members were able to safely abandon the vessel in lifeboats, although one mariner (James Bryan of Norfolk, Virginia)] re-entered the vessel to find his personal items and subsequently drowned. The vessel sank, bow first, in 35 minutes.

The lightkeeper stationed at Cape Otway Lightstation witnessed the sinking, and three boats from Apollo Bay went in search of survivors. The ship's lifeboats were found, and successfully towed back to Apollo Bay, arriving at dawn, 9 November 1940.

This preceded the attack on Pearl Harbor, in December 1941, by more than a year, and resulted in the death of the first US seaman in World War II.

The City of Rayville was originally a steam ship, but was converted to diesel in 1930.