The Turtle Ship: A Contender for the World’s First Armored Battleship 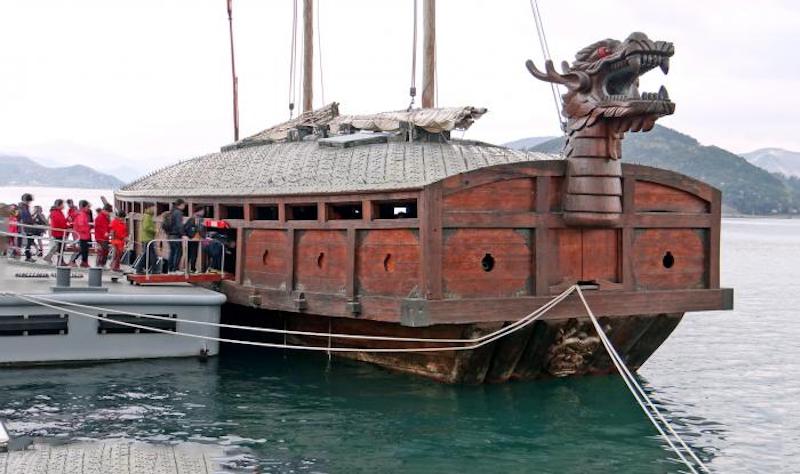 As a species, humanity has always been shockingly gifted at finding new ways to kill one another. As wars have raged over the millennia, armaments have had to evolve. This has led to some genuinely brilliant ingenuity. Take for example the Korean turtle ship, the Geobukseon. Its design was so brilliant that it was in service for centuries and is often described as being the world’s first armored ship. Its record in battle is impressive, but who came up with its odd design and why was it so successful?

THE TURTLE SHIP'S DESIGN AND CONCEPTION
The turtle ship's construction and design are normally attributed to Admiral Yi Sun-sin of the Korean Navy. In the late 16th century AD, Yi-Sun-sin and his subordinates were concerned that a Japanese invasion was not just possible, but increasingly likely, and it was decided a new ship design was needed.
Work on the first of Yi Sun-sin’s turtle ships commenced in 1591. The design of the first generation of turtle ships, the gwiseon, from 1413, was taken and improved upon in almost every way. It took less than a year to go from design to completion. The cannons were first tested on March 12th, 1592, and the first complete warship was launched on March 27th, 1592, just in time for the invasion.

TURTLE SHIP STRUCTURE
Turtle ships varied in design but were usually 100-120 feet (33.3-40 meters) long. They were essentially traditional panokseon ships with a reinforced hull placed over the top to protect the sailors. And with guns added - lots of guns.
For propulsion turtle ships usually had two masts and two sails. On top of this, it had oars used for maneuvering and speed boosts. The ship was incredibly fast when needed and could easily outmaneuver most Japanese ships. The ship could spin on the spot allowing it to fire a volley at an enemy, turn and fire another volley whilst the first row of cannons reloaded.
The ship's crew was comprised of 50-60 marines, 70 oarsmen, and the captain, all of whom were kept safe by the closed deck.

THE DECKING QUESTION: ALL IRON OR JUST LOTS OF IRON SPIKES?
There has been much controversy on whether the decking of the turtle ship was iron clad or not. Some historical sources point to the ships being covered in hexagonal iron plates, making them the first truly armored ships in history.
Yet there are no contemporary Korean sources that state the ships were iron-clad, just that they had iron spikes on the decking to deter boarding attempts. Furthermore, iron cladding wouldn't have made much sense. The Japanese did not use cannons on their ships at this time, nor did they tend to use fire arrows, making armor plating somewhat redundant.
Then comes the issue of cost. The turtle ships were already hugely expensive to produce and iron cladding would have made them impossibly so. Each ship would have needed around six tons of iron, iron that could be better spent casting cannons.
Ultimately it seems unlikely that the turtle ship's decks were iron plated. There was no real use for expensive iron plating and the turtle ships were already sufficiently armed against typical Japanese threats. Iron plating would have been overkill.

TURTLE SHIPS WERE WEAPONS AND CARRIED MORE WEAPONS
A turtle ship was protected from without just like a turtle with its head pulled in, but it also had cool features and leading-edge weapons

Dragon's Head: Perhaps one of the “coolest” parts of the turtle ship was the dragon’s head which sat on top of the ship at the bow. Historically figureheads weren’t there to do much more than look impressive or menacing, but the dragon’s head on a turtle ship had a few tricks up its sleeve.
While initially there just to scare Japanese soldiers, various functions were added to the dragon's head. Some carried a tube that released a toxic cloud created from mixing sulfur and saltpeter in the ship’s bowels. The cloud helped to mask the ship's movements whilst also making it difficult for the Japanese to coordinate.
The dragon’s head could also be fitted with a cannon that either fired cannonballs or flaming arrows ahead of the ship, giving the turtle ship an extra angle of attack. Finally, the dragon’s head was usually heavily reinforced so that if nothing else it could be used as a ram.

Spikes: The top of the turtle ship was covered in metal spikes. This was to dissuade the Japanese from attempting to board the ship. Some historical sources state these spikes were covered with rice sacks or mats to trick Japanese soldiers into attempting boarding.

Cannons, Lots of Cannons: The turtle ship was an absolute powerhouse when it came to firepower. Depending on the version, a turtle ship usually carried anywhere between 24-36 cannons of varying types. The gun ports were arranged with 6-11 ports along the sides and 2 ports each at the front and the back, allowing the Turtle ship to attack from any direction at range.
The turtle ship's smallest weapon was the Seungja which was a type of arquebus with a range of around 600 feet (200 meters). Its range and damage output were much less than that of a cannon, but it was more accurate.
The ship also featured Cheonja, Jija, Hyeonja, and Hwangja chongtong cannons. The Hwangja had an absolutely massive 3,900-foot (1,300-meter) range whilst the heaviest cannon the Cheonga could decimate the enemy at up to 600 meters (656 yards). The two intermediate cannons usually shot fire arrows rather than cannon balls. 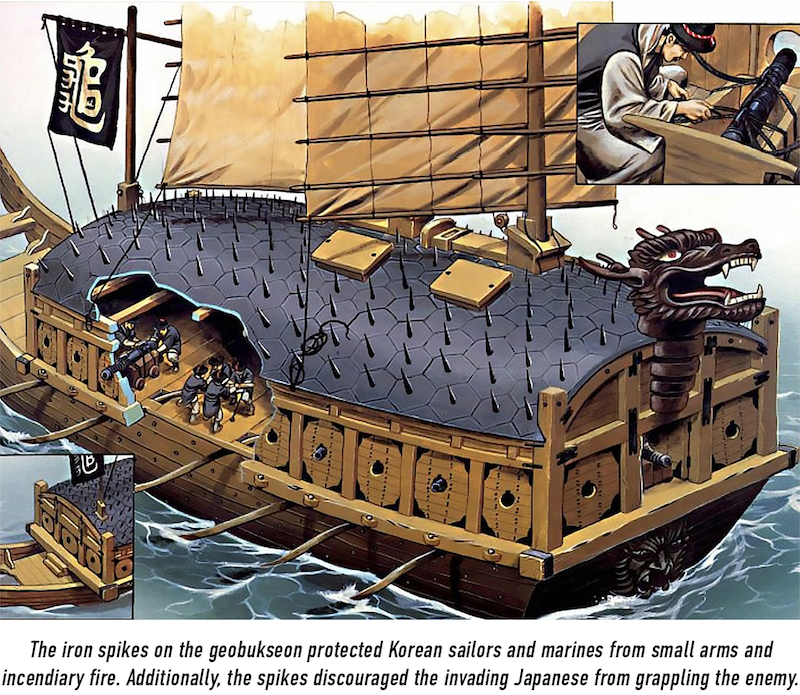 CONCLUSION
The turtle ship was really a masterpiece of design for its time. Yi Sun-sin won every battle against the Japanese Navy , winning 16 out of 16 battles. Not a bad record. The Japanese quite simply had no countermeasure to the overwhelming firepower the turtle ships could put out.

Turtle ships stayed in service until the 19th century, production peaking around 1770 with around 40 ships. After 1770 the numbers quickly began to drop. Turtle ships were expensive, difficult to maintain, and demanded a lot of crew. Eventually, the design fell out of favor and newer modern designs and tactics replaced it. The turtle ship could no longer brute force its way through combat like it once could.