The Sinking of the Steamship Arctic 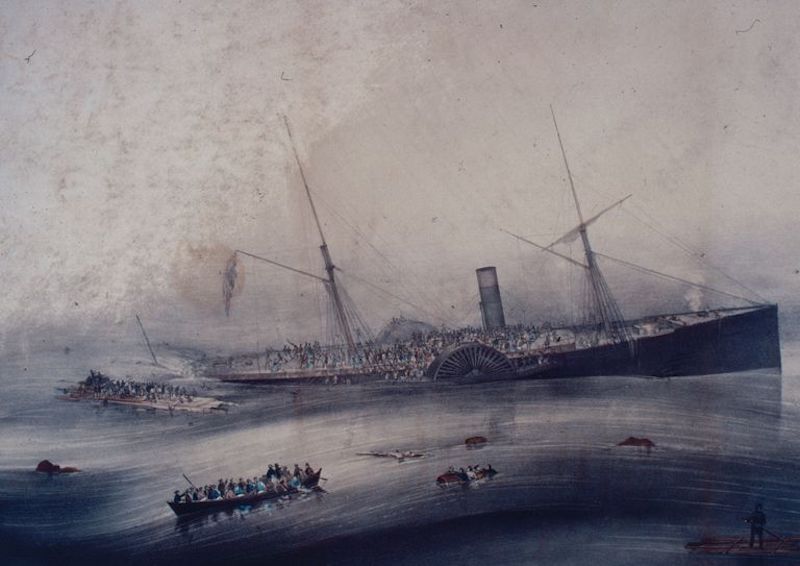 The sinking of the steamship Arctic in 1854 stunned the public on both sides of the Atlantic, as the loss of 350 lives was staggering for the time. And what made the disaster a shocking outrage was that not a single woman or child aboard the ship survived

Lurid tales of panic aboard the sinking ship were widely publicized in newspapers. Members of the crew had seized the lifeboats and saved themselves, leaving helpless passengers, including 80 women and children, to perish in the icy North Atlantic

Background of SS Arctic
The Arctic had been built in New York City, at a shipyard at the foot of 12th Street and the East River, and was launched in early 1850. It was one of four ships of the new Collins Line, an American steamship company determined to compete with the British steamship line run by Samuel Cunard.

The businessman behind the new company, Edward Knight Collins, had two wealthy backers, James and Stewart Brown of the Wall Street investment bank of Brown Brothers and Company. And Collins had managed to get a contract from the US government that would subsidize the new steamship line as it would carry the US mails between New York and Britain.

The ships of the Collins Line were designed for both speed and comfort. The Arctic was 284 feet long, a very large ship for its time, and its steam engines powered large paddle wheels on either side of its hull. Containing spacious dining rooms, saloons, and staterooms, the Arctic offered luxurious accommodations never before seen on a steamship.

The Collins Line Set A New Standard
When the Collins Line began sailing its four new ships in 1850, it quickly gained a reputation as the most stylish way to cross the Atlantic. The Arctic, and her sister ships, Atlantic, Pacific, and Baltic, were hailed for being plush as well as reliable.

The Arctic could steam along at about 13 knots, and in February 1852 the ship, under the command of Captain James Luce, set a record by steaming from New York to Liverpool in nine days and 17 hours. In an era when ships could take several weeks to cross the stormy North Atlantic, such speed was stunning.

At the Mercy of the Weather
On September 13, 1854, the Arctic arrived in Liverpool after an uneventful trip from New York City. Passengers departed the ship, and a cargo of American cotton, destined for British mills, was offloaded.

On its return trip to New York the Arctic would be carrying some important passengers, including relatives of its owners, members of both the Brown and Collins families. Also along on the voyage was Willie Luce, the sickly 11-year-old son of the ship’s captain, James Luce.

The Arctic sailed from Liverpool on September 20, and for a week it steamed across the Atlantic in its usual reliable manner. On the morning of September 27, the ship was off the Grand Banks, the area of the Atlantic off Canada where warm air from the Gulf Stream hits cold air from the north, creating thick walls of fog. Captain Luce ordered lookouts to keep a close watch for other ships.

Shortly after noon, lookouts sounded alarms. Another ship had suddenly emerged from the fog, and the two vessels were on a collision course

The Vesta slammed into the Arctic
The other ship was a French steamer, the Vesta, which was transporting French fishermen from Canada to France at the end of the summer's fishing season. The propeller-driven Vesta had been built with a steel hull.

The Vesta rammed the bow of the Arctic, and in the collision the steel bow of the Vesta acted like a battering ram, spearing the Arctic’s wooden hull before snapping off.

The crew and passengers of the Arctic, which was the larger of the two ships, believed the Vesta, with its bow torn away, was doomed. Yet the Vesta, because its steel hull was built with several interior compartments, was actually able to stay afloat.

The Arctic, with its engines still steaming away, sailed onward. But the damage to its hull allowed seawater to pour into the ship. The damage to its wooden hull was fatal.

Panic aboard the Arctic
As the Arctic began to sink into the icy Atlantic, it became clear the great ship was doomed.

The Arctic only carried six lifeboats. Yet had they been carefully deployed and filled, they could have held approximately 180 people, or almost all the passengers, including all the women and children aboard.

Launched haphazardly, the lifeboats were barely filled and were generally taken over entirely by crew members. Passengers, left to fend for themselves, tried to fashion rafts or cling to pieces of wreckage. The frigid waters made survival nearly impossible.

The captain of the Arctic, James Luce, who had heroically tried to save the ship and get the panicking and rebellious crew under control, went down with the ship, standing atop one of the large wooden boxes housing a paddle wheel. In a quirk of fate, the structure broke loose underwater, and quickly bobbed to the top, saving the captain's life. He clung to the wood and was rescued by a passing ship two days later. His young son Willie perished.

Mary Ann Collins, wife of the Collins Line’s founder, Edward Knight Collins, drowned, as did two of their children. And the daughter of his partner James Brown was also lost, along with other members of the Brown family.

The most reliable estimate is that about 350 people died in the sinking of the SS Arctic, including every woman and child aboard. It is believed 24 male passengers and about 60 crew members survived.

Aftermath of the Arctic's Sinking
Word of the shipwreck began to hum along telegraph wires in the days following the disaster. The Vesta reached a port in Canada and its captain told the story. And as survivors of the Arctic were located, their accounts began to fill newspapers.

Captain Luce was hailed as a hero, and when he traveled from Canada to New York City aboard a train, he was greeted at every stop. However, other crew members of the Arctic were disgraced, and some never returned to the United States.

The public outrage over the treatment of the women and children aboard the ship resonated for decades, and led to the familiar tradition of of saving "women and children first" being enforced in other maritime disasters.

In Green-Wood Cemetery in Brooklyn, New York, is a large monument dedicated to the members of the Brown family who perished on the SS Arctic. The monument features a depiction of the sinking paddle-wheel steamer carved in marble