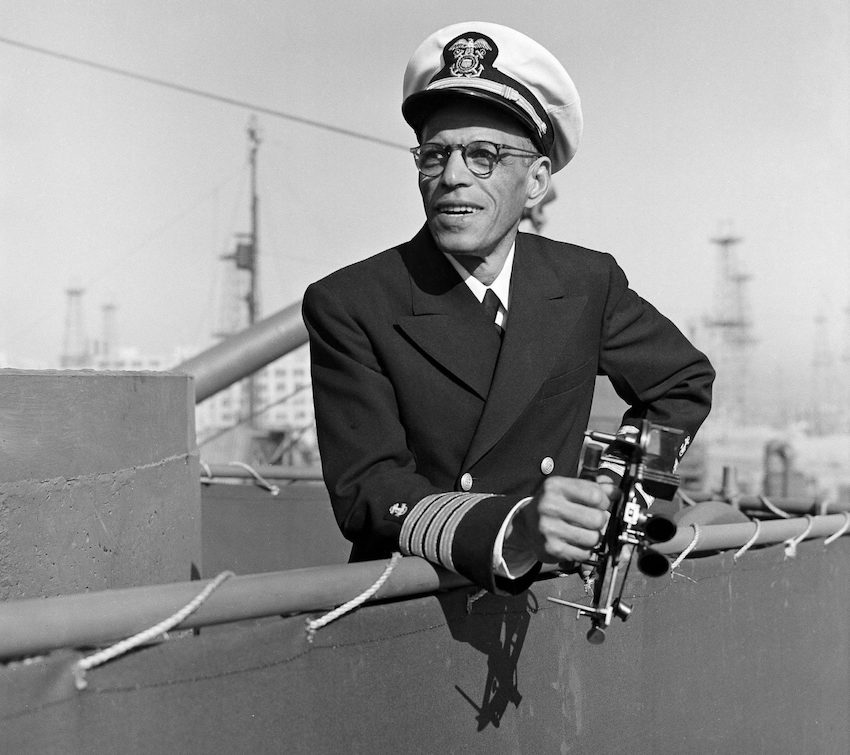 When the United States entered World War II in December 1941, it faced a shortage of merchant mariners. With supplies in desperate needs overseas a massive sealift would require not only a huge fleet of cargo ships, but the seafarers to sail them. This opened the door a bit to black mariners for a range of shipboard jobs. One of the most dramatic stories of this era involved shipmaster Hugh Mulzac.

Born in the British West Indies in 1886, Mulzac went to sea after high school, sailing on British vessels. He later attended the Nautical School in Swansea, in the United Kingdom, earning a mate’s license. He sailed as a ship’s officer in World War I, and came to the United States, becoming a citizen in 1918.

By 1920, Mulzac passed the examination as a U.S. shipmaster, but there were no shipboard berths available to a black captain. Although he held a master’s license, which qualified him to be a ship’s captain, he worked for the next 20 years mostly in the steward’s department of various shipping lines. This was the only shipboard work he could find, and he became an expert in food service management.

With the outbreak of World War II, Mulzac recognized an opportunity to use his license and command a vessel. At age 56, he was named master of the new Liberty ship Booker T. Washington , christened by legendary opera singer Marian Anderson. Mulzac insisted on having an integrated crew, not the all black crew that had been planned. The U.S. Maritime Commission relented, and the Booker T. Washington made 22 round-trip voyages with Mulzac at the helm.

With the war’s end, Mulzac found himself “on the beach,” again the victim of discrimination. Because of his involvement in the 1930s in the labor union movement, he also fell prey to the rampant McCarthyism of the early 1950s.

It was not until 1960, at age 74, that Mulzac could obtain another maritime officer job, as a night mate. He died in 1971, but left a legacy of courage, fierce determination and accomplishment in the face of extreme hardship. Joseph B. Williams, the first African-American graduate of the U.S. Merchant Marine Academy, sailed as a cadet-in-training aboard the Liberty ship Booker T. Washington. He remembered Capt. Hugh Mulzac as a “demanding taskmaster,” but who taught him “how to be a qualified officer.”

Mulzac’s war service was brief but intense and ended abruptly. Blackpast.org reports:
"When his last assignment on a Liberty ship ended in 1947, now 61-year-old Mulzac was still denied the opportunity to command privately owned commercial vessels. He retired from seafaring and turned to radical politics. In 1950, Mulzac ran on the American Labor Party (ALP) ticket for Queens Borough President.  He received only 15,000 votes in his losing bid.  With the U.S. in the midst of the Cold War, Mulzac in 1951 was blacklisted by shipping companies because of his affiliation with the controversial ALP which many considered a Communist organization.  The U.S. Government also revoked his seaman’s papers and license.  In 1960, a federal judge reinstated Mulzac’s seaman’s documents and license and soon afterward at the age of 75 Mulzac found work again as a seaman."

After the war, Mulzac could not regain a position as captain. In 1948 he unsuccessfully filed a lawsuit against the ship’s operators.
Captain Mulzac died in 1971 at the age of 84.