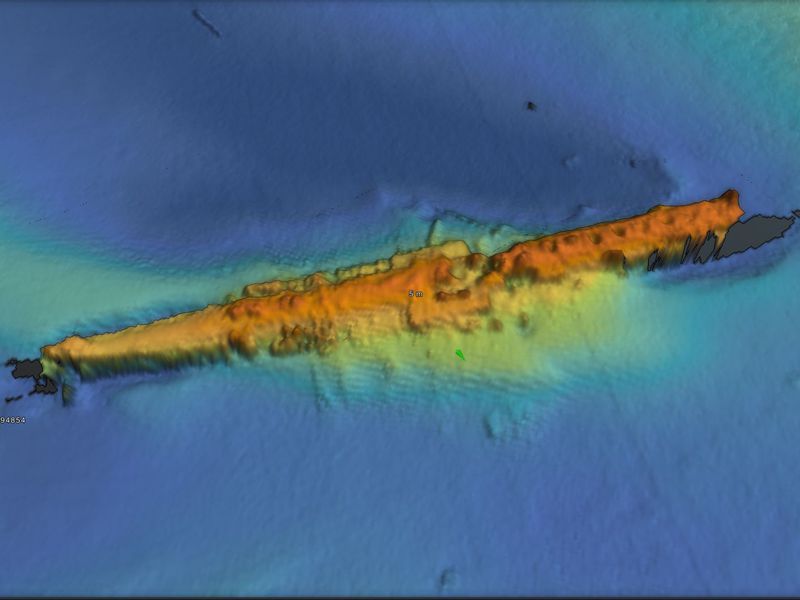 British archaeologists have surveyed the wreck of a German U-boat for the first time since it sank 103 years ago. The remarkably intact vessel adds to the story of an especially fraught period of naval warfare during World War I.

A team led by Rodrigo Pacheco-Ruiz of the University of Southampton discovered the submarine’s remains during an exploratory dive this summer. Resting at a depth of 150 feet below the surface, the wreck is situated some 20 nautical miles off the coast of Yorkshire, England. As David Keys reports for the Independent, the researchers used two remotely operated vehicles to capture the first video and sonar 3-D images of the sunken ship.

After more than a century at the bottom of the North Sea, the vessel showed an “astonishing” level of preservation, according to a statement. The main hull remains intact, and images show a large hole on its port side, where Royal Navy patrol boat P-57 rammed it on November 18, 1917. Debris including a torpedo tube surrounds the wreck.

“Today the vessel is only marked on the navigation charts as a shipwreck and until now very little was known of the submarine’s condition,” says Pacheco-Ruiz in the statement. “It has been a privilege to be able to explore a wreck in such good condition and have the opportunity to find out more about its past.”

Researchers identified the submarine as UC-47, a German U-boat responsible for sinking 56 Allied vessels in just 13 months, per the Independent. After a year-long career, the submarine—and all 26 of its crew members—sank to the sea floor during a fatal encounter with P-57. 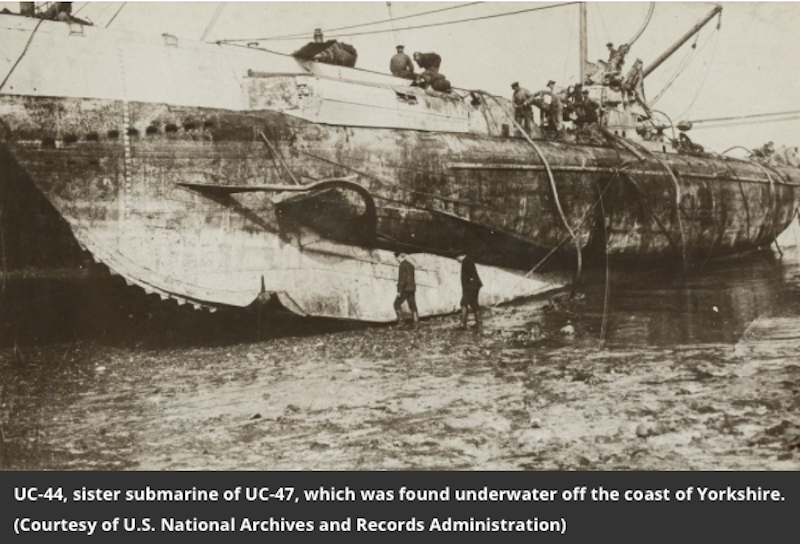 The UC-47 showdown took place when P-57 spotted the submarine 200 yards away and launched a surprise attack within 15 seconds, according to Divernet. The British boat struck at 17 knots, tearing into the hull and filling it with water. Over the next two days, the British sailors used a technique called “depth charging”—dropping explosives to tear through the hull—to ensure the submarine’s destruction.

It’s possible that British divers traveled to the wreck to retrieve valuable intelligence like code books and charts, says maritime historian Stephen Fisher in the statement. But the new investigation revealed that the boat came to rest at a depth of approximately 150 feet—probably too far underwater for divers to retrieve documents by hand.
A more probable scenario is that the Royal Navy repeatedly used depth charges in hopes of creating holes that might send important documents floating to the surface. Information garnered from UC-47 would have allowed the British to locate and disarm several German minefields, saving other merchant vessels from destruction.
Records show that German naval officials suspected the British had obtained these secret documents. German historians will work with the University of Southampton to discover how the Germans discovered the coup: Potential explanations include eavesdropping on radio communications and extracting information from British sources after the war, according to the Independent.

“As our investigation continues, we hope to progressively shed more light on this long-forgotten deadly North Sea drama,” Fisher tells the Independent.