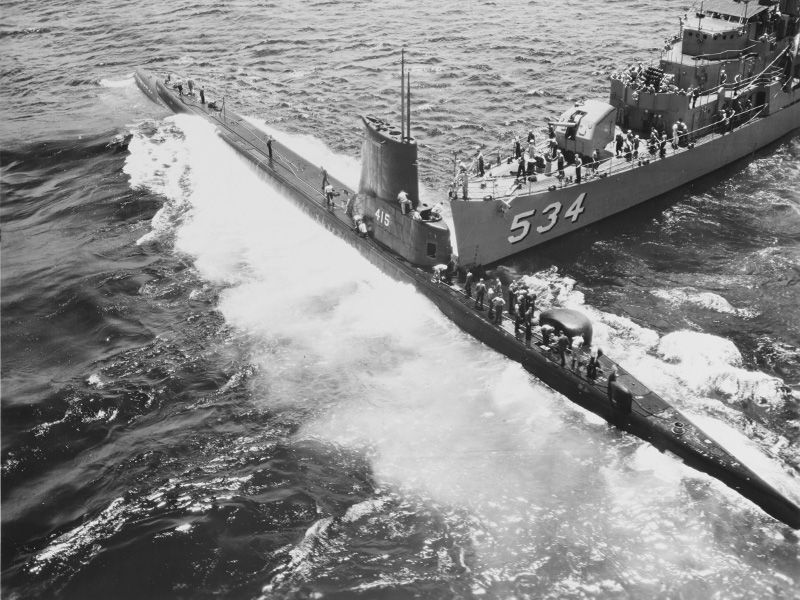 Despite spanning decades, the Cold War was fortunately without an overabundance of American casualties. The USS Stickleback was one of the few exceptions: During a training exercise conducted in May 1958, the submarine suffered a collision with the destroyer escort USS Silverstein and sank 11,000 feet down to the ocean floor.

Now, more than six decades after its demise, the Stickleback has been rediscovered off the coast of Oahu by the Lost 52 Project, a private organization established to find the 52 United States submarines sunk during World War II, and the four lost during the Cold War. The Stickleback marks the team’s sixth find—the product of a potent combination of robotics and sonar-based imaging technology, reports Isaac Schultz for Atlas Obscura.

Praising the find in a statement, Bob Neyland, head of the Naval History and Heritage Command’s Underwater Archaeology Branch, describes the Stickleback’s retrieval as “an opportunity to remember and honor the service of our sailors and marines.”

Commissioned in California in March 1945, the Stickleback witnessed the tail end of World War II, then spent its next few years in and out of reserve before deploying on Cold War patrol in 1954, according to the Naval History and Heritage Command’s website.

Just four years later, the vessel met its untimely end about 20 miles off the shore of Barbers Point, Oahu. After wrapping up a simulated torpedo run on the Silverstein, the Stickleback lost power on its return dive beneath the surface. The submarine plummeted about 800 feet before its crew deployed the emergency ballasts, buoying the boat back up just a few hundred feet ahead of the rapidly approaching Silverstein. The two crafts collided, gouging a hole in the Stickleback’s left flank, according to the statement.

Though the Stickleback’s entire crew was safely shuttled aboard nearby vessels, the boat itself was damaged beyond repair. Even as rescue ships tried to tug the submarine back to the surface, its compartments quickly filled with seawater, dragging it to the ocean depths for its final dive.

Settled more than two miles beneath the sea’s surface, the wreck eluded detection for decades. Though missing ships can often be pinpointed by nearby fleets that are able to witness and record the loss, submarines tend to be solo acts, making their disappearances tough to track, Tim Taylor, head of the underwater-technology firm Tiburon Subsea and founder of the Lost 52 Project, tells Atlas Obscura.

Guided by old naval records, Taylor’s team deployed a series of underwater vehicles equipped with sonar equipment to scour the region where the Stickleback sank to its watery grave. Though the damage inflicted by the Silverstein’s bow had cleaved the Stickleback in two, it was otherwise remarkably well-preserved, the researchers’ scans and photos show.

The underwater explorers announced their fifth find—the USS Grayback, which sank off the coast of Okinawa in February 1944—last November. The submarine, credited with sinking 14 enemy ships over the course of the war, was located after the researchers revisited Japanese naval dispatches and found that the coordinates listed for a destroyed vessel believed to be the Grayback differed from the U.S. naval record by just one digit, according to John Ismay of the New York Times.

For Taylor, the Stickleback’s reentry into the naval record is another notch in the belt of the Lost 52 Project, which he says “continues to expand our work to search for additional lost World War II ships.”

Adds Taylor, “I am proud of this recent Cold War discovery which honors the men, their memory and their mission.”

Video is available at: https://youtu.be/H36ysvYjPME