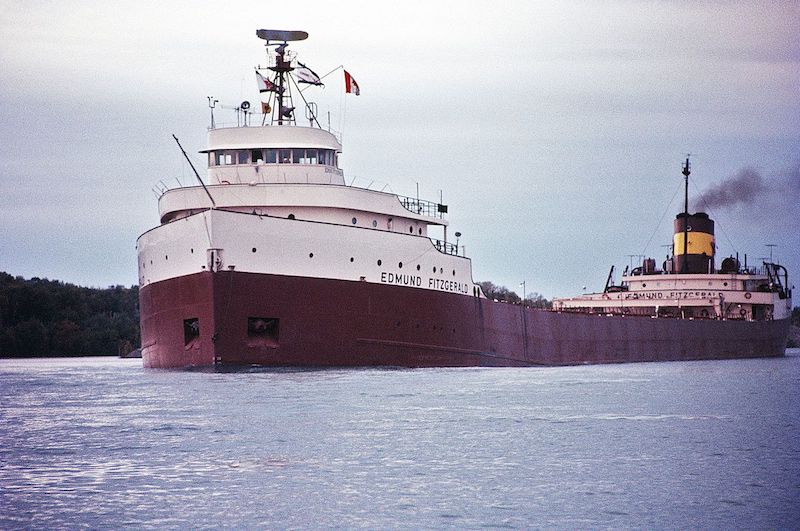 The Edmund Fitzgerald (sometimes called the Mighty Fitz or Big Fitz) was a Great Lakes bulk cargo vessel that entered service in 1958. The 730 feet long, 75 feet wide vessel was designed to carry taconite pellets (a type of iron ore) from mines near Duluth to iron works in Detroit and Toledo. It was the largest ore carrier on the Great Lakes when it entered service.

The Edmund Fitzgerald suddenly sank during a storm when it was around 17 miles from Whitefish Bay. Although the captain of the Edmund Fitzgerald reported having difficulties during the storm, no distress signals were sent. The entire crew of 29 people died when the vessel sank. No bodies were ever recovered from the wreckage.

Later when the wreck was found, it was discovered that the ship had broken in two. It still sits on the bottom of Lake Superior at 530 feet deep.

Conditions on the Great Lakes can be extremely treacherous and can produce high waves. Steep, short-period waves can be particularly hazardous to large ships such as the Edmund Fitzgerald, especially when they exceed 16 feet (5m) in height, says the University of Michigan.

The height of waves generated on the lakes is primarily a function of wind speed and the fetch, or distance, over which they are generated. Of secondary yet substantial importance is the degree of surface-layer stability present over the lake. Lake Superior is the largest of the Great Lakes in surface area and volume. It has the capacity to contain the water volume of the four other lakes plus three additional Lake Eries. Given its immense size, it is capable of sustaining waves in excess of 33 feet (10m).

Contributing to the accident was the lack of transverse weathertight bulkheads in the cargo hold and the reduction of freeboard authorized by the 1969, 1971 and 1973 amendments to the Great Lakes Load Line Regulations.