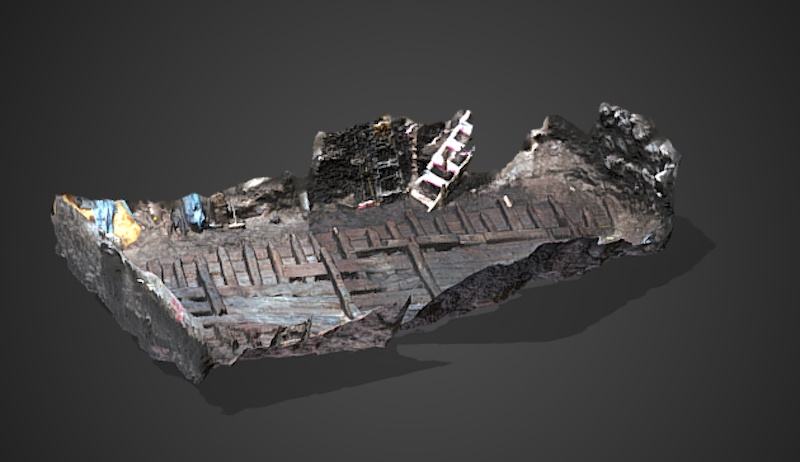 Of all the many wondrous locations where shipwrecks are found, an urban recreation area in the center of a world capital might be one of the most unexpected. But earlier this year, marine archaeologists uncovered the probable remnants of the 16th-century cargo vessel, likely the Samson, beneath Kungsträdgården park at the center of the Stockholm, Sweden, according to the Local. Though the Samson, a ship commissioned by Sweden’s Charles IX in the 1590s, has been lost to history for the better part of four centuries, the discovery suggests it may have spent quite a bit of that time conspicuously underfoot.

“It’s fantastically fun to make a discovery like this,” Philip Tonemar, an archaeologist who took part in the excavation, says in an interview with the Local. “This will never happen to me again.”

Today, the center of Stockholm is a bustling hub teeming with homes, businesses, parks and people—but no substantial bodies of water. As recently as the middle of the 18th century, however, large swaths of the city were underwater, potentially clearing a path for the Samson to dock on Stockholm’s coast, according to a Facebook post from Arkeologikonsult, the archaeology company behind the dig

Archaeologists can’t yet guarantee the identity of the vessel. But based on the ship’s approximate style, age and size—more than 100 feet in length—the Samson is the likeliest candidate. If that’s the case, the discovery may help resolve the mystery surrounding the naval ship’s disappearance in 1607, just a few years after its construction. Perhaps the Samson was stripped of parts and abandoned in Stockholm at this time and spent decades languishing on Swedish shores, accumulating debris and wear and tear, Tonemar tells the Local. “We have found rubbish from residents in the area that was thrown directly over the ship.”

By the time the city’s flooded areas were drained in the mid-1800s, the vessel may have been buried beneath some 200 years of trash.

That all changed this past year, when construction began on a building adjacent to the park. After hitting the unexpected ship, workers called in a team of marine archaeologists, including several from the Swedish National Maritime and Transport Museums, who slowly unearthed the remnants of an ancient wooden hull.

The Samson’s recovery is noteworthy for more than its unusual location. Constructed at a crucial juncture in the history of naval architecture, the vessel straddles two distinct eras of shipbuilding, making it a “unique example of a hybrid,” marine archaeologist Jim Hansson from Sweden’s Vrak – Museum of Wrecks says in a statement on Facebook. Samson also sports a mishmash of features from both transport ships and warships, including a small cavalry of 10 to 20 naval guns. The ship’s unique construction makes it a “really exciting find,” Hansson says.