During the Cold War, the C.I.A. Secretly Plucked a Soviet Submarine From the Ocean Floor Using a Giant Claw 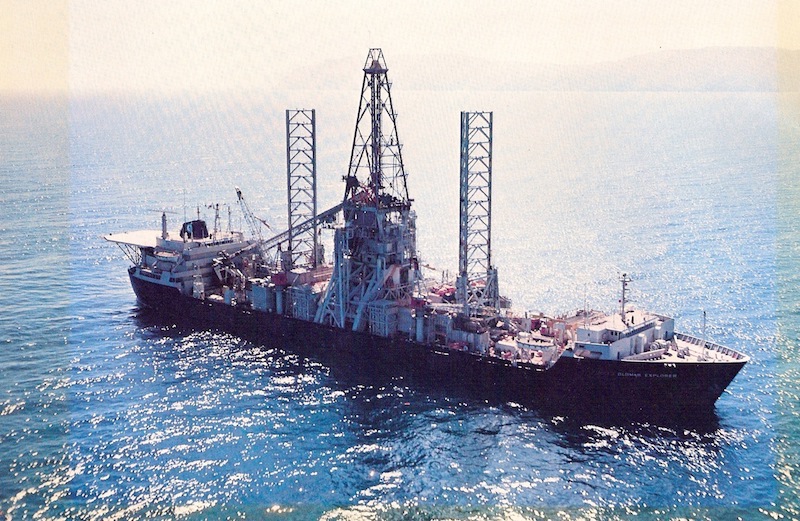 In a corner exhibit of the recently reopened International Spy Museum in Washington, D.C., a submarine control panel, a swoopy-banged wig, detailed whiteprints and a chunk of manganese are on display. Together, they represent relics of a Cold War espionage mission so audacious, the museum’s curator, Vince Houghton, compares it to the heist from Ocean’s 11. This mission, codenamed Project Azorian, involved the C.I.A. commissioning the construction of a 600-foot ship to retrieve a sunken Soviet submarine from the ocean floor—all in complete secrecy. “I can’t imagine there’s another country in the world that would have thought, ‘We found a Soviet submarine, under [more than three miles] of water. Let’s go steal it,’ says Houghton.

The six-year mission began in 1968, when the Soviet ballistic missile submarine K-129 went missing without explanation somewhere in the Pacific Ocean. In this post-Cuban Missile Crisis era, both American and Soviet submarines prowled the open seas with nuclear weapons aboard, prepared for potential war. Some reports indicate that the sinking was due to a mechanical error such as inadvertent missile engine ignition, while the Soviets for a time suspected the Americans of foul play. After two months, the Soviet Union abandoned its search for K-129 and the nuclear weapons it carried, but the United States, which had recently used Air Force technology to locate two of its own sunken submarines, pinpointed the K-129 1,500 miles northwest of Hawaii and 16,500 feet below the surface. According to the declassified C.I.A. history of the project, “No country in the world had succeeded in raising an object of this size and weight from such a depth.”

Internally, the intelligence community deliberated about the cost-to-reward ratio of such an expensive and risky undertaking even as the submarine offered a tantalizing trove of information. According to Houghton, the value of the K-129 stemmed not just from the code books and nuclear warheads onboard, but also the chance to understand the manufacturing process behind the rival power’s submarines. If the U.S. knew how the K-129’s sonar systems operated, or the mechanisms by which the submarines kept quiet, they could improve their ability to detect them. And by 1967, the Soviet Union had amassed an armament of nuclear weapons large enough that the two nations had “virtual nuclear parity,” Houghton explains. As a result, the Americans were hungry to gain a competitive advantage—an edge the K-129 might provide.

The C.I.A. brainstormed several improbable-sounding means of recovering the submarine. One suggestion involved generating enough gas on the ocean floor to buoy the submarine to the surface. Instead, they settled on an idea reminiscent of the classic arcade game—a giant claw that would grasp and pull the K-129 into the “moon pool” belly of a giant ship. Initially, the project boasted an estimated ten percent chance of success. (Granted, that figure increased as Azorian approached completion.)

Legally speaking, the U.S. was concerned that the project could leave them open to charges of piracy if the Soviets had an inkling of the illicit submarine-salvaging plans. Wanting to sidestep diplomatic tensions and keep whatever knowledge was to be gleaned from the mission secret, the C.I.A. constructed an elaborate cover story with the help of enigmatic billionaire Howard Hughes. The aviation mogul lent his imprimatur to the construction of the 618-foot-long ship, to be named the Hughes Glomar Explorer, which was advertised as a deep-sea mining research vessel. In 1972, a champagne christening ceremony and fabricated press release celebrated the ship.

When the ship first sailed from Pennsylvania to waters near Bermuda for testing in 1973, the Los Angeles Times noted the occasion, calling the vessel “shrouded in secrecy” and observing, “Newsmen were not permitted to view the launch, and details of the ship’s destination and mission were not released.” Evidently, the public and press chalked the mystery up to Hughes’ reputation as a recluse, such a loner that he was said to eschew even his own company’s board meetings.

Next, the Glomar Explorer navigated to the Pacific around South America—because it was too wide to pass through the Panama Canal. After some minor foibles (the U.S.-assisted 1973 Chilean coup happened the same day as seven technicians were trying to board the ship in the country’s port city of Valparaíso), the Glomar Explorer arrived in Long Beach, California, where it loaded more than 20 vans full of equipment (including a darkroom, paper processing, nuclear waste handling) for analysing the K-129’s contents. 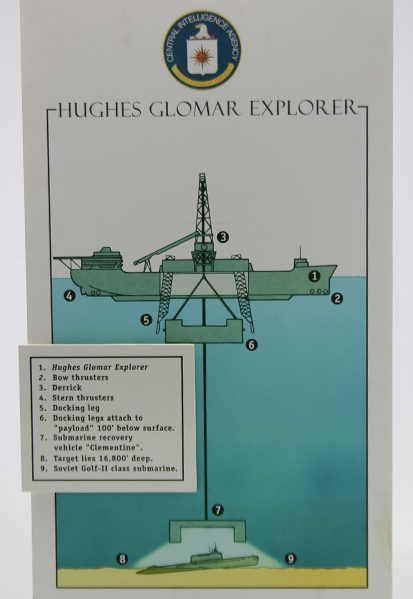 Meanwhile, a team built the claw (nicknamed “Clementine” and formally known as the “capture vehicle”) in a gargantuan floating barge called HMB-1 in Redwood City. In the spring of 1974, HMB-1 submerged and met up with the Glomar Explorer off the coast of Catalina Island in southern California. HMB-1 opened its roof, and the Glomar Explorer opened the bottom of its hollow “moon pool” to take the steel claw onboard. Then the HMB-1 detached and returned to Redwood City, the transfer unnoticed.

That summer, the Glomar Explorer, with the approval of President Richard Nixon, set off towards the spot where the K-129 rested. By this point, the Cold War had reached a détente, but still, two separate Soviet ships (likely loaded with intelligence operatives) closely monitored the supposed mining vessel as it worked to retrieve the submarine. (At one point, Glomar crew members even piled crates on their landing deck to prevent any attempts to land a helicopter.) But the mission continued undetected—as the 274 pieces of heavy steel pipe that stretched between the claw and the ship were being slowly hauled back onboard, with the submarine in Clementine’s grasp, the second Soviet tug sailed away.

After about a week of slow upward progress, Project Azorian finally completed the lift of the K-129—but only one part of it. According to Project AZORIAN: The CIA and the Raising of the K-129, a book co-written by naval historian Norman Polmar and documentary director Michael White, about midway through the process, a few of the grabber arms encircling the submarine broke, and a large part of the K-129 fell back to the ocean floor. While the later media reports and history books generally relayed that the more desirable components of the submarine, like the code room, sunk, Houghton encourages skepticism of the details surrounding the project’s ostensible failure. “The conventional wisdom has become that this was a failed mission,” he explains. “[The C.I.A. has] allowed that belief to be what everyone understands, but why would they not? I always say, ‘We have no idea what they got.’” (Many of the details in this story are sourced from C.I.A. declassified documents and recently published historical accounts, but since other findings from the mission are still classified, and the C.I.A. may have had reason to obfuscate the story, skepticism remains warranted.)

We do know, however, that the Glomar Explorer retrieved the bodies of several of the K-129’s crewmembers, whom they gave a military burial at sea, which the C.I.A. filmed and gave to Russia almost 20 years later. Coincidentally, the retrieval also brought up manganese samples from the bottom of the sea, the material that the Glomar Explorer purportedly was researching.

The U.S. seemed to have gotten away with the elaborate submarine heist—Ford’s secretary of defense, James Schlesinger, said in a White House meeting, “The operation is a marvel.” In early 1975, however, after a random robbery of the headquarters of Hughes’ Summa Corporation, which was acting as a front for the Glomar Explorer, the story made its way to the headlines of the Los Angeles Times and national television. The story broke later than it could have—famed New York Times reporter Seymour Hersh had been following it as early as 1973 but honored a request from C.I.A. director William Colby to suppress the story—and were riddled with inaccuracies. (The code name was thought to be “Jennifer,” which was actually referred only to its security procedures, and the L.A. Times report placed the recovery efforts in the Atlantic Ocean.) Nonetheless, it was enough to alert the Soviet Union and “disturb” (his words) President Ford. Project Matador, the plan to retrieve the rest of the K-129, apparently got nixed as news of the thought-to-have-failed mission and its rumored (but, Houghton says, ultimately unknowable) $300 million-plus price tag circulated. 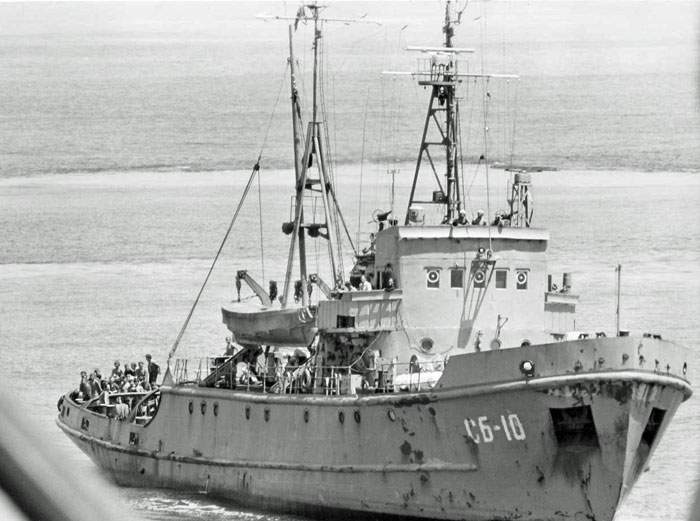 The C.I.A. also faced a diplomatic dilemma that spring. Pressed by the Soviet ambassador to the U.S. and Freedom of Information Act requests from journalists, they wanted to avoid directly acknowledging that they’d illicitly stolen a submarine from the watchful Soviets, but were obligated to somehow respond. “[The U.S. government] did not want to embarrass the Soviets,” Houghton says, “mainly because in doing so, [they] really set diplomacy back significantly, because the Soviet premier would have to respond” through sanctions or an attack on a territory. In the effort to walk this diplomatic tightrope and comply with FOIA requirements, the “Glomar response”—“we can neither confirm nor deny”—was coined. While the Glomar response stood up in federal court as a reason to deny a FOIA request, the incident, writes historian M. Todd Bennett, “intensified otherwise routine ‘Intelligence Wars,’ tit-for-tat actions taken by the Soviet and American intelligence services.” That May, Soviet operatives increased the amount of microwave radiation trained on the American embassy in Moscow.

Forty-five years after the Glomar Explorer hauled (part of) the K-129 from the ocean floor, Project Azorian remains “legendary within the [intelligence] community,” Houghton says. The glass cases show the onesies worn by crew members onboard, phony belt-buckle “safety awards,” a barometer from the ship and even a wig C.I.A. deputy director Vernon Walters wore to pay the Glomar Explorer an incognito visit, but they also name-check engineer John Graham and display a scaled-down version of the detailed white print used to design the now-defunct ship.

Azorian stands out, Houghton says, because “it’s so bold, so ambitious, and it almost was guaranteed to fail.” And yet, although only part of the submarine was retrieved, the ship was built, the almost ridiculous proposition of a giant claw extending to the ocean floor proved functional, and despite the scale of the project, it stayed secret for seven years. The Spy Museum positions the Azorian saga as a paean to innovation, an exemplar of how the “unsolvable problems” of the intelligence world can be tackled with creativity and technological advances.