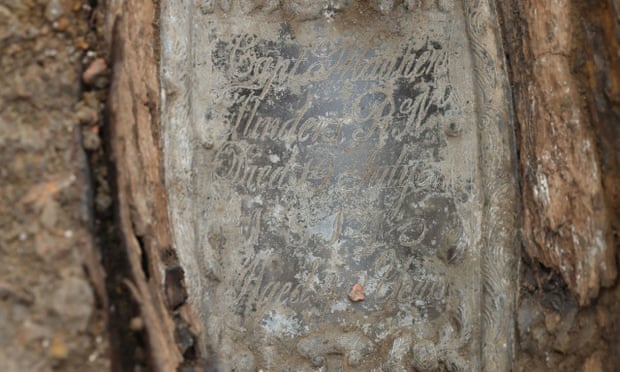 Some said he was buried under platform 4; others suggested platform 12 or 15. When a statue of Captain Matthew Flinders was installed at Euston in 2014, the only regret of those who had campaigned for a memorial to the explorer – who led the first circumnavigation of Australia – was that his final resting place, understood to be somewhere near the London rail station, was unlikely ever to be known.

Five years later, that mystery has been solved by archaeologists working on the new HS2 rail link. The remains of the British navigator – buried over 200 years ago – have now been discovered in a graveyard being excavated to make way for the high-speed line between London and Birmingham.
Only a small proportion of the 40,000 bodies being exhumed from St James’s cemetery, behind the station, have been identified so far, making the discovery of Flinders’ remains earlier this month a “needle in a haystack” find, according to HS2’s lead archaeologist, Helen Wass.

While some of those buried in the cemetery had tin name plates on their coffins, many of these have not survived. But when Flinders died in July 1814, aged 40, the plate on his coffin was made of lead, meaning it was still legible.

“All the records showed that he was buried there, but actually finding someone with a breastplate confirming their name is really amazing,” said Wass. “It is so exciting.” The find is more remarkable because when Flinders’ sister-in-law visited the cemetery in 1852, the location of his grave was already lost. 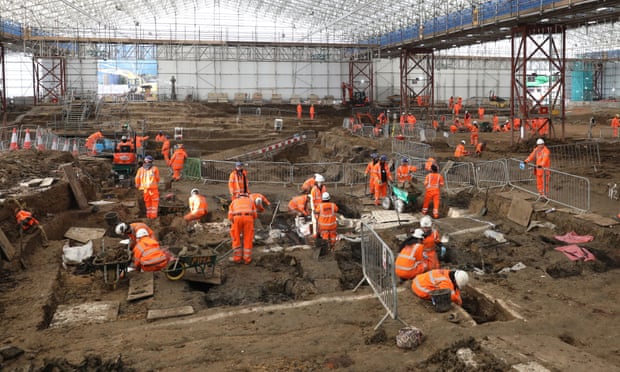 As the first person to circumnavigate the continent and the explorer who popularised its name, Flinders is a figure of national importance in Australia, where a mountain range, two national parks, a university in Adelaide and one of the main streets of Melbourne, among many other things, are named after him.

As such, said the country’s high commissioner to the UK, George Brandis, the discovery of his remains is “a matter of great importance to Australia”.

In his native Britain, however, he has been largely forgotten, despite a biography that could almost compete with Robinson Crusoe, the novel that first inspired him as a child to go to sea.

Born in Lincolnshire in 1774 to a family of surgeons, Flinders joined a navy ship aged 16 and a year later was sailing with the notorious Captain William Bligh, formerly of the Bounty, who taught him navigation and chart making. By 24 he had charted Tasmania and been the first to prove it was an island.

Five years later Flinders had circumnavigated the entire continent, and charted much of its coastline, accompanied by his beloved cat Trim and an Aboriginal man called Bungaree – notably the first person ever to be described as an “Australian”.

Forced to dock in Mauritius on his way home in 1803, Flinders was arrested by the French, with whom Britain was by now at war, and held on the island for seven years. Trim, his companion in captivity, disappeared the following year, likely stolen and eaten by a hungry slave; years later Flinders was still mourning “the best and most illustrious of his race”. In many of the statues of Flinders in Australia – and at Euston – he is accompanied by the faithful Trim.

Rebekah Higgitt, a historian of science at the university of Kent, said that like Captain James Cook and Bligh, Flinders was one of “the great explorer-surveyor-commanders” of the intense period of navigational advances of the eighteenth and nineteenth centuries. As well as being a talented navigator, she said, he was clearly an impressive character in other ways.
“He wants to go to sea, and the way to do that is to get to grips with mathematics and trigonometry, which he does really, really well. I think he must also have had quite a lot of charm, as he is promoted and supported by people quickly.”

Along with many of the other skeletons excavated from the St James’s site, Flinders’ remains will now be examined by osteo-archaeologists. They will be looking for lessons as to how his life at sea affected his health. With excavations due to continue until late next year, Wass hopes the site has more secrets to reveal.

“We are going to be able to tell so many stories about the life of London … we will look across the spread of the burial ground, the rich, poor and everything in between, so we can try to tell as holistic a story as possible about who is buried there.”
Once they have been examined, the bodies will all be reburied in a site yet to be confirmed.