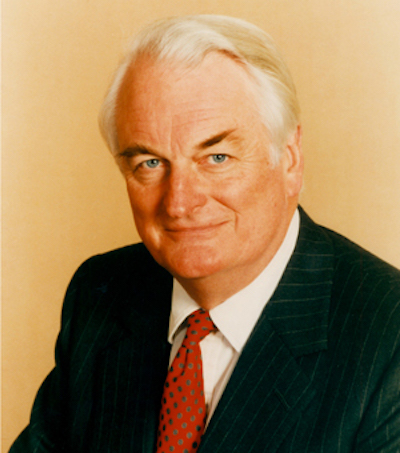 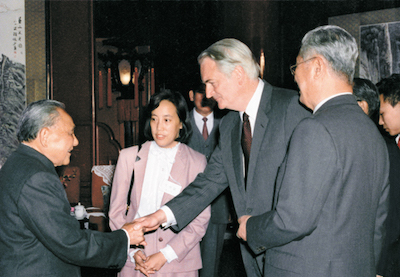 SIR ADRIAN SWIRE, who has died aged 86, was a driving force in the fifth generation of his family’s Far Eastern transport, trading and real estate empire, and a leader of the British shipping industry.

Adrian Swire worked in harmonious partnership with his elder brother Sir John (1927-2016), who maintained a strategic guiding hand while Adrian led many of the entrepreneurial initiatives that kept them abreast of economic and political developments in Hong Kong, “Greater China” and beyond. John was chairman of the parent company John Swire & Sons from 1966 to 1987, with Adrian as his deputy; Adrian was chairman from 1987 to 1997 and (following the untimely death of his successor, Edward Scott) 2002 to 2005.

It was Adrian’s firm conviction that Beijing would abide by its promise to allow Hong Kong to remain a prosperous international entrepot and stepping stone to the mainland after the 1997 handover. His achievement was to nurture ties that enabled Swires to strengthen its interests in the region at a time when other expatriate businesses were inclined to retreat.

Having first visited the mainland as a young shipping manager in the 1950s, he built personal friendships with key figures such as the Chinese vice-president Rong Yiren and his son Larry Yung, chairman of the powerful investment group CITIC. During the nervous pre-handover years, Swires under his leadership continued to demonstrate long-term commitment to the region through investments in real estate and a range of other sectors.
The Swires’ modern corporate model – in which their major operating companies were listed and managed in Hong Kong but remained under the prudent stewardship of the brothers (and now their sons) from London – is widely admired both for its stability and its adaptability to changing circumstances. The family also largely succeeded in avoiding media attention, despite a fortune recently estimated at £3.3 billion.

The group traces its origins to Liverpool in 1816, when the first John Swire (1793- 1847) established himself as a merchant trading across the Atlantic. In succeeding generations, the family turned eastwards to become traders, sugar refiners and shipowners in Hong Kong and Shanghai, operating paddle steamers on the Yangtze and the China coast and extending their network to Japan and Australia.

The Second World War brought devastation to the Swire fleet and factories, but the business was rebuilt in the post-war decades by the formidable Jock Swire (1893-1983), father of Adrian and John and great-grandson of the founder. Jock expanded into air transport with a majority stake in the fledgling Cathay Pacific airline and an aircraft maintenance business in Hong Kong; he also laid foundations for global developments that would be taken forward by his sons in offshore oil and gas services, real estate and hotels, and Coca-Cola bottling.

Adrian Swire joined what was then called Butterfield & Swire in 1956 and was assigned to its shipping arm, China Navigation Co, in Hong Kong and Japan before becoming its London-based operations manager in 1961. Early seagoing experiences took him to Papua New Guinea and the South Pacific islands, and on a vessel carrying Hajj pilgrims back from Jeddah to Malaysia – during which he was called upon, alongside the captain, purser and on-board imam, to judge Koran-reading competitions

He led the shipping business through containerisation in the late 1960s and the diversification of its fleet from traditional liners to bulk carriers, tankers and offshore support vessels.

He was well qualified to serve as president of the General Council of British Shipping in 1980-81, when firm leadership was needed in response to an extended seamen’s strike. One profile writer sensed “a very tough operator” behind his modest and engaging manner. “Good with people, quick, decisive, dispassionate and with a great sense of humour”, Swire was also blessed with “the elegant good looks of 1930s drawing-room farce”.
Though flying was a lifelong fascination – he held a private pilot’s licence for almost 60 years – Swire’s direct involvement in Cathay Pacific came late in his career, when he was involved in the 1990s in traffic rights negotiations with London and Beijing and in securing Cathay’s position as Hong Kong’s international flag-carrier through the presence of Chinese state investors as strategic shareholders.

He also oversaw continuing growth of Swires’ interests in the US and elsewhere. On retiring from the chair for the second time, he became honorary president of the group. His nephew Barnaby Swire is now chairman; his son Merlin is taipan (resident chief) in Hong Kong and his second son, Sam, is a director in London.

Adrian Christopher Swire was born on February 15 1932, the younger son of John (Jock) Kidson Swire and his wife Juliet, née Barclay, who descended from the East Anglian banking dynasty. Adrian enjoyed a happy wartime childhood at Hubbards Hall, the family home near Harlow in Essex – his ambition to fly inspired by witnessing the Battle of Britain overhead.
He was educated at St Peter’s Court prep school and Eton, and did National Service as a lieutenant in the Coldstream Guards – chiefly on public duties in London, including standing vigil at the lying in state of King George VI in Westminster Hall in February 1952, but with sufficient spare time to gain his pilot’s licence.

He then followed his father and brother to University College, Oxford, where by his own account he “spent a lot of time flying [with the university air squadron] and was president of the Gridiron Club … but got a respectable Second in History”. In fact “much cleverer than he let on” (as a contemporary recalled), he narrowly missed a First.

In his early years, Adrian Swire had survived two terrible accidents. On the night of January 23 1945, St Peter’s Court – evacuated from Broadstairs to a mansion in Devon – suffered a devastating fire in which three boys and a matron died. And on the morning of October 8 1952 he was on an overnight express from Scotland that collided with two other trains at Harrow and Wealdstone station; it was Britain’s worst peacetime rail crash, with 112 fatalities. Both events, he recalled, were “traumatic, but no ‘counselling’ in those days and back immediately to normal routine”.

In service with the Royal Hong Kong Auxiliary Air Force and later as a private pilot, Swire flew some 40 different aircraft. Though he downplayed his skills, he was proud to have owned (and taught himself to fly) a Spitfire IX MH434, built in 1943 and one of the few Spitfires to have survived in flying condition without ever having been substantially rebuilt.

Adrian Swire was knighted in 1982. Outside the family businesses, he was a director of Brooke Bond and HSBC and deputy chairman of Naafi, the trading organisation of the Armed Forces. He was a past chairman of the International Chamber of Shipping and an Elder Brother of Trinity House; chairman of the RAF Benevolent Fund, a trustee of the RAF Museum and president of the Spitfire Society. He was an honorary air commodore in the Royal Auxiliary Air Force from 1987 to 2000, and received the Air Efficiency award. From 1995 to 2004 he was Pro-Chancellor of Southampton University.

In private life, Adrian Swire was a down-to-earth countryman, devoted to family life and to his farming estate at Sparsholt in Oxfordshire. He quietly maintained a personal charitable trust that gave around £1 million a year to chosen causes.
He married, in 1970, Lady Judith Compton, daughter of the 6th Marquess of Northampton, who survives him with their daughter Martha and sons Merlin and Sam.