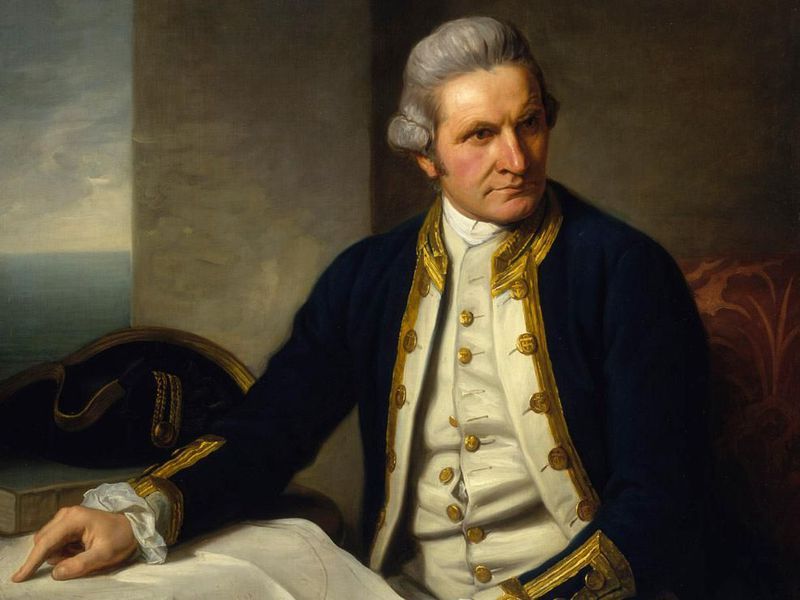 It was 1768, and the European battle for dominance of the oceans was on. Britain, France, Spain, Portugal and the Netherlands had already spent several centuries traversing the globe in search of new land to conquer and resources to exploit, but the Pacific—and specifically, the South Seas—remained largely unknown. In their race to be the first to lay claim to new territory, the British government and the Royal Navy came up with a secret plan: Send a naval officer on a supposedly scientific voyage, then direct him to undertake a voyage of conquest for the fabled Southern Continent. The man chosen for the job was one James Cook, a Navy captain who also had training in cartography and other sciences.

Europeans already knew the Pacific had its share of islands, and some of them held the potential for enormous wealth. After all, Ferdinand Magellan became the first European to cross the Pacific Ocean way back in 1519, and by then it was already known that the “Spice Islands,” (in modern-day Indonesia) were located in the Pacific. Magellan was followed by a dozen other Europeans—especially Dutch and Spanish captains—over the next two centuries, some of them sighting the western shores of Australia, others identifying New Zealand. But the vastness of the Pacific Ocean, combined with the unreliability of maps, meant no one was sure whether the Southern Continent existed or had been discovered.

Even among the British, Cook wasn’t the first to set his sights on the South Pacific. Just a year earlier, Captain Samuel Wallis piloted the ship Dolphin to make first landing on Tahiti, which he christened George III Island. As for the British government, they had publicized their interest in the region since 1745, when Parliament passed an act offering any British subject a reward of £20,000 if they found the fabled northwest passage from Hudson Bay in North America to the Pacific. The British government wasn’t alone in its imperialist interests; the Dutch explorer Abel Tasman had already sighted an island off the south coast of Australia that would later be named after Tasmania him, and the Spanish had built fortifications on the Juan Fernández Islands off the west coast of Chile.

“For the Spaniards to fortify and garrison Juan Fernández meant that they intended to try to keep the Pacific closed,” writes historian J. Holland Rose. “The British Admiralty was resolved to break down the Spanish claim

But to do so without drawing undue attention to their goals, the Admiralty needed another reason to send ships to the Pacific. The Royal Society presented the perfect opportunity for just such a ruse. Founded in 1660, the scientific group was at first little more than a collection of gentlemen with the inclination and resources to undertake scientific projects. As historian Andrew S. Cook (no apparent relation) writes, “The Society was in essence a useful vehicle for government to utilize the scientific interests of individual fellows, and for fellows to turn their scientific interests into formal applications for government assistance.” When the Royal Society approached the Navy, requesting they send a ship to Tahiti to observe the transit of Venus that would occur in 1769, it probably seemed like the perfect cover, Cook the scholar says.

The 1769 transit of Venus was the mid-18th-century version of the mania surrounding last year’s solar eclipse. It was one of the most massive international undertakings to date. Captain Cook’s crew, complete with astronomers, illustrators and botanists, was one of 76 European expeditions sent to different points around the globe to observe Venus crossing the sun. Scientists hoped that these measurements would help them quantify Earth’s distance from the sun and extrapolate the size of the solar system. The rare event was deemed so important that the French government, fresh off fighting the Seven Years’ War (French and Indian War) with England, issued an instruction to its war ships not to harass Cook. It wasn’t an undue precaution; French astronomer Guillaume Le Gentil traveled to India to observe the 1761 transit of Venus but ultimately missed the event because his ship had to outrun English men-of-wars, according to historian Charles Herdendorf.

Captaining the Endeavour, Cook departed from Plymouth 250 years ago on August 26, 1768, in order to arrive in Tahiti on time for the transit, which would happen on June 3, 1769. His path carried him across the Atlantic and around the difficult-to-traverse Cape Horn in South America toward the south Pacific. He carried with him sealed secret instructions from the Admiralty, which he’d been ordered not to open until after completing the astronomical work. Unfortunately for the scientists, the actual observations of the transit at points around the world were mostly useless. Telescopes of the period caused blurring around the planet that skewed the recorded timing of Venus passing across the sun.

But for Cook, the adventure was just beginning. “Cook left no record of when he opened the sealed packet of secret orders he’d been given by the Admiralty,” writes Tony Horwitz in Blue Latitudes: Boldly Going Where Captain Cook Has Gone Before. “But on August 9, 1769, as he left Bora-Bora and the other Society Isles behind, Cook put his instructions into action. ‘Made sail to the southward,’ he wrote, with customary brevity.”

The gist of those instructions was for Cook to travel south and west in search of new land—especially the legendary “Terra Australis,” an unknown continent first proposed by Greek philosophers like Aristotle, who believed a large southern continent was needed to balance out the weight of northern continents. In their instructions, the Royal Navy told Cook not only to map the coastline of any new land, but also “to observe the genius, temper, disposition and number of the natives, if there be any, and endeavor by all proper means to cultivate a friendship and alliance with them… You are also with the consent of the natives to take possession of convenient situations in the country, in the name of the King of Great Britain.”

Cook went on to follow those instructions over the next year, spending a total of 1,052 days at sea on this mission. He became the first European to circumnavigate and meticulously chart the coastline of New Zealand’s two islands, and repeatedly made contact with the indigenous Maori living there. He also traveled along the east coast of Australia, again becoming the first European to do so. By the time he and his crew (those who survived, anyway) returned to England in 1771, they had expanded the British Empire’s reach to an almost incomprehensible degree. But he hadn’t always followed his secret instructions exactly as they were written—he took possession of those new territories without the consent of its inhabitants, and continued to do so on his next two expeditions.