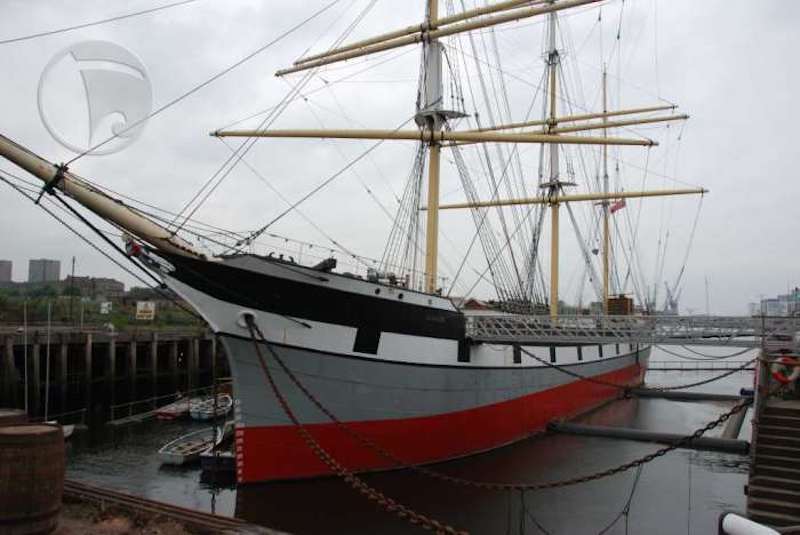 Glenlee is a steel-hulled three-masted barque, built in 1896 for Glasgow owners, trading as a cargo ship.[1] From 1922 she was a sail training ship in the Spanish Navy. She is now a museum ship at the Riverside Museum on Pointhouse Quay, Glasgow, known as The Tall Ship at Glasgow Harbour.

She is 1,613 GRT and 1,490 NRT. Rigged only with double topgallant sails over double top sails, she was not equipped with royal sails (baldheader rigging) to save costs concerning gear and seamen. As with many baldheaded sailing ships the square sails were a little wider than the sails of a standard rigging to gain sail area for a better propulsion.

On 13 December 1896, just ten days after she was launched fully rigged and seaworthy, her maiden voyage brought her in ballast to Liverpool and from there with a general cargo to Portland, Oregon. For 23 years she traded as a bulk cargo carrier under the Red Ensign via Cape of Good Hope to Australia, returning via Cape Horn, firstly under the ownership of Archibald Sterling and Co, Glasgow, then as Islamount of Islamount Sailing Ship Co Ltd (Robert Ferguson & Co), Dundee(1898-1905), and finally with the Flint Castle Shipping Co Ltd (Robert Thomas & Co), Liverpool (1905-1918).

Islamount was renamed the Clarastella in 1919 when she changed hands to the Star of Italy Italian Shipping Company (Italian: Società Italiana di Navigazione Stella d'Italia) of Milan who registered her in Genoa. The new owner had her repaired and equipped with two auxiliary diesel engines (1922).

In 1922 the ship came into the hands of the Officers' Military Navy School (Spanish: Escuela Naval Militar de Oficiales) as Galatea to be used as a sail training ship. During this period the ship underwent a lot of changes to her hull and superstructure. A flying bridge was installed on the poop deck, a flying jibboom was attached to the spike bowsprit, and many other changes such as the installation of accommodation facilities for 300 cadets.

In April 1931 she became part of the Spanish Republican Navy. At the time of the coup of July 1936 she was at sea and reached Ferrol, a harbour that had been taken by the Nationalist faction.

After more than 47 years of service as a sail and later on as a stationary training ship she was first laid up in A Graña, Ferrol, her Spanish port of registry. In 1981 the underwater hull was re-plated at the drydock in Ferrol.

Later Galatea was completely de-rigged down to a hulk (all yards with standing and running rigging and even the masts removed) and was towed to Seville to be used as a floating museum, but left forgotten. Some sources even reported that the ship was sunk in the harbour by removing her bronze sea cock valve, but salvaged later by the Spanish Navy.
In any case, the ship was in such poor condition that it was eventually decided to scrap her. In 1990 a British naval architect (Dr. Sir John Brown, 1901-2000) discovered the ship and in 1993 she was rescued from being scrapped and subsequently bought by the Clyde Maritime Trust at auction for ₧5000,000 or £40,000. After making the hull seaworthy (all openings on deck were closed and the flying bridge spanning the poop deck during her service in Spain and the attached flying jibboom were removed) the ship was returned to Glasgow months later in tow from Seville. 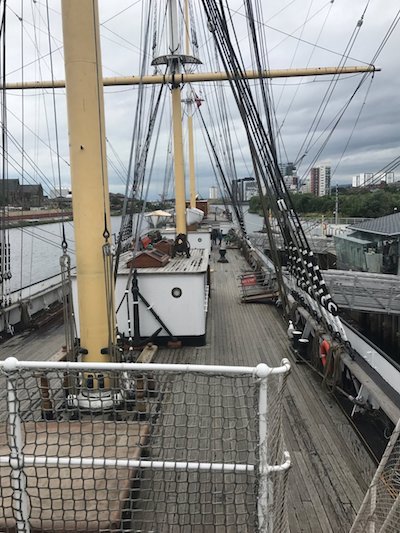 After preliminary works in dry-dock such as the removal of the unnecessary propellers, the check and repair of all the plates below the waterline and new paint, a six-year-long process of restoration began including a new cut wooden figurehead, a complete set of new rigging including the re-assembling and re-stepping of her original masts and re-crossing of the old yards (1998), as well as many other replacements (original deckhouses) and repairs. Her old masts and many of the old yards, which still existed somewhere in Spain, were given back by the Spanish when they realized that the old ship would be really renewed to her original "Cape Horn status", painted grey again with "gun ports".

Except for the hull a new ship had to be rebuilt. All the changes made to the ship by the Spanish and previous owners had to be removed, such as all the cabins built for the trainees and a lot of scrap iron ballast in the frames of the holds. First of all she was given back her original name, Glenlee, by the Lord Provost of Glasgow on 6 July 1993 when the ship arrived in Glasgow for the first time since her launch in 1896 at her old and new port of registry - Glasgow Harbour. Glenlee is now recognised as part of the National Historic Fleet.

As a museum ship and tourist attraction, Glenlee offers educational programmes, events including exhibitions and is a venue for the West End Festival and volunteering opportunities. Since June 2011, the ship has been open at Glasgow's new Riverside Museum. 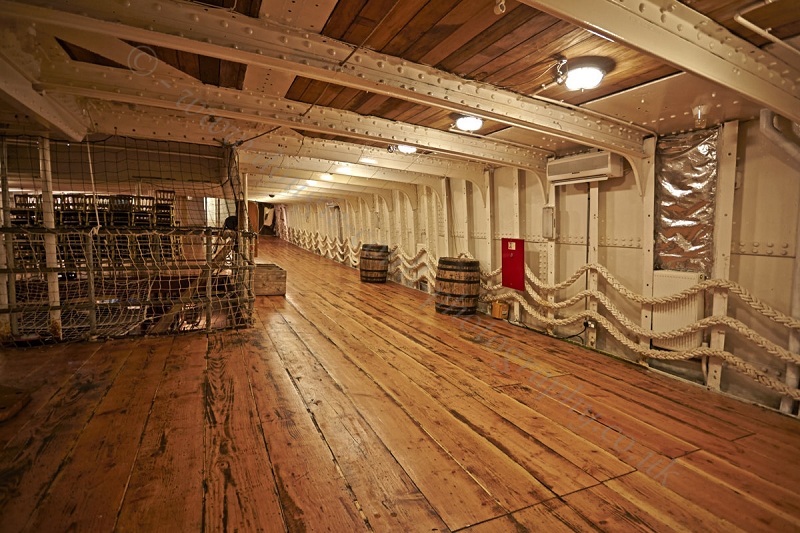