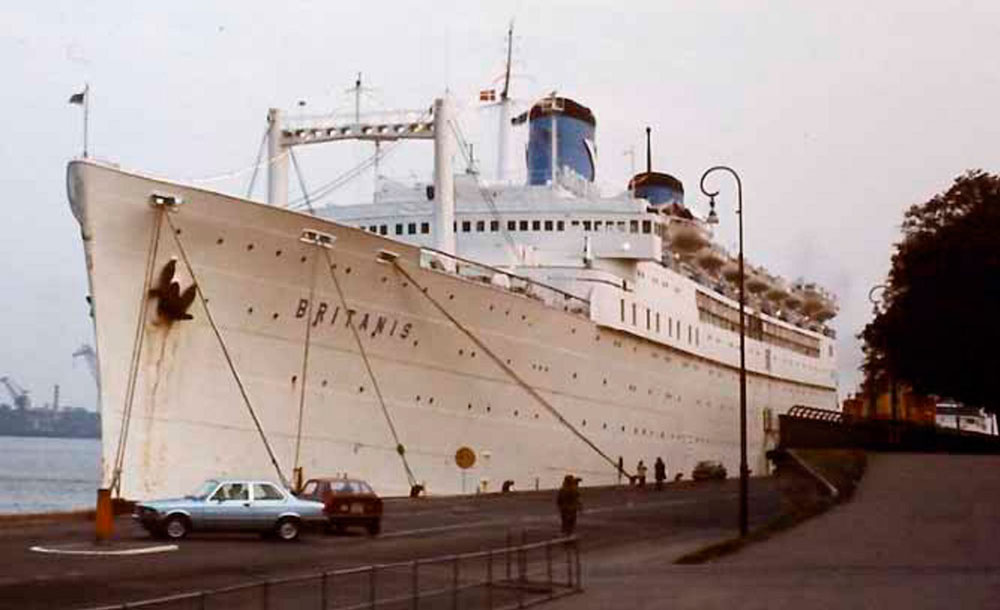 The "Britanis" was built for Matson Line as the "Monterey" in 1932 and retained this name until 1957 when she was re-named "Matsonia". In 1963 she was again re-named by Matson Lines as the "Lurline" as a result of the previous "Lurline" being sold to Chandris in 1963, which she kept until bought by Chandris Lines in 1970 when she was re-named "Britanis", At Piraeus, Britanis was greatly modified to hold 1,655 passengers, mainly by subdividing existing cabins and converting cargo holds to new cabin areas. She re-entered service on 21 February 1971, leaving Southampton bound for Sydney and back; a regular round-trip she would make for three years. In 1974 she saw service as a cruise ship in the Caribbean during winter and Europe during the summer. In May 1982 Britanis cruised between New York and Bermuda with a smaller capacity of 1,200 passengers. In winter 1983, Britanis sailed from Miami to the Caribbean, then sailed from New York in the summer. A major overhaul in 1986 included parts from her sister Ellinis (ex-Lurline), some of which went to Ellinis from Homeric (ex- Mariposa) when Homeric was scrapped in 1974. At this point, parts from three sister ships were now bound together in Britanis. The refit gave Britanis eight years of Caribbean cruising until 19 November 1994. Britanis was chartered by the US Government in 1994 as a floating barracks for military personnel at Guantanamo Bay, Cuba. She suffered minor damage from an electrical fire, was repaired at US Government expense, then laid up at Tampa, Florida in late 1996 Chandris opted to sell Britanis as part of a plan to cease cruise line operations. The ship was maintained in anchorage until 24 January 1998 when she was sold to AG Belofin Investments of Liechtenstein and renamed Belofin-1. Her new owners intended to recoup their investment by selling the ship to scrappers, but a downturn in steel prices held them up for more than a year. On 3 July 2000 Belofin-1 was towed by the Ukrainian tug Iribis out of Tampa Bay with the CN Marine ferry Bluenose lashed to her port side. The group was bound for ship breakers in India. Belofin-1 began taking on water and listing during the voyage but nobody was on board to correct the list. The tugboat crew cut her free and Belofin-1 capsized and sank due to progressive flooding some fifty miles off Cape Town South Africa on 21 October 2000.