The liner was ordered in 1938 to replace the aging ships on the Dutch East Indies route, her keel was laid in 1939 at De Schelde shipyard in Vlissingen, Netherlands, for Rotterdamsche Lloyd . Interrupted by World War II and two bombing raids, the ship was not launched until July 1946 as the Willem Ruys. The ship was named after the grandson of the founder of the Rotterdamsche Lloyd who was taken hostage and shot during the war.

Willem Ruys was completed in late 1947. At that time, the Rotterdamsche Lloyd had been granted a royal prefix in honor of its services during the war. Willem Ruys was 192 metres in length, 25 metres in beam, had a draught of 8.9 metres, and measured 21,119 gross register tons.

Eight Sulzer engines drove two propellers. She could accommodate 900 passengers. She featured a superstructure very different to other liners of that era: Willem Ruys pioneered low-slung aluminium lifeboats, within the upper-works flanks. In 1964, she was sold to the Flotta Lauro Line, or Star Lauro, (now MSC Cruises) and renamed the Achille Lauro (after the company owner). Extensively rebuilt and modernized after an August 1965 onboard explosion, the Achille Lauro entered service in 1966 carrying passengers to Sydney, Australia. The ship played a role in evacuating the families of British servicemen caught up in the Six Day War, arriving in Cairo on June 1, 1967. The Achille Lauro was converted to a cruise ship in early 1972, during which time shesuffered a disastrous fire. A 1975 collision with the cargo ship Youseff resulted in the sinking of the latter, and another onboard fire in 1981 took her out of service for a time. She was laid up in Tenerife when the Lauro Lines went bankrupt in 1982 . 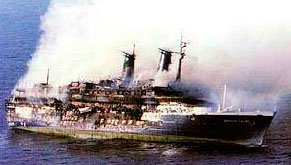 The Chandris Line took possession of her in 1985, shortly before the hijacking. On October 7, 1985, four men representing the Palestine Liberation Front (PLF) took controlof the liner off Egypt as she was sailing from Alexandria to Port Said The hijackers had been surprised by a crew member and acted prematurely. Holding the passengers and crew hostage, they directed the vessel to sail to Tartus, Syria, and demanded the release of 50 Palestinians then in Israeli prisons. After being refused permission to dock at Tartus, the hijackers murdered wheelchair-bound American passenger Leon Klinghoffer and threw his body overboard. The ship headed back towards Port Said, and after two days of negotiations, the hijackers agreed to abandon the liner in exchange for safe conduct and were flown towards Tunisia aboard an Egyptian commercial airliner.United States President Ronald Reagan ordered that the plane be intercepted by F-14A Tomcats from the VF-74 "BeDevilers" and the VF-103 "Sluggers" of Airwing 17, based on the aircraft carrier USS Saratoga, on October 10 and directed to land at Naval Air Station Sigonella, a N.A.T.O base in Sicily, where the hijackers were arrested by the Italians after a disagreement between American and Italian authorities. The other passengers on the plane (possibly including the hijackers leader, Abu Abbas) were allowed to continue on to their destination, despite protests by the United States. Egypt demanded an apology from the U.S. for forcing the airplane off course. The ship continued in service; she was reflagged in 1987 when the Lauro Line was taken over by the Mediterranean Shipping Company to become StarLauro. On November 30, 1994, she caught fire off the coast of Somalia while enroute to South Africa. Abandoned, the Achille Lauro finally sank on December 2.