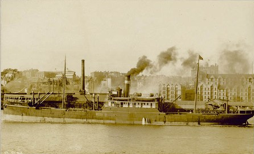 The SS Mildura was a cattle ship on its way from the Kimberley when it got lost in a cyclone in 1907. It was a 2217 ton steel steamer built in Glasgow in 1901.

The Mildura was wrecked on March 10, 1907 when it clipped the North West reef. The crew was rescued by SS Burrumbeet but all the cattle on board were left to die.

Salvaged timber and iron from the Mildura

were used in renovations at the Yardie Station homestead. The hull sat on the reef until WW2 when it was used for bombing practice. The wreck can be found at the end of Mildura Wreck Road.