Archaeologists in Norway May Have Found a 700-Year-Old Shipwreck 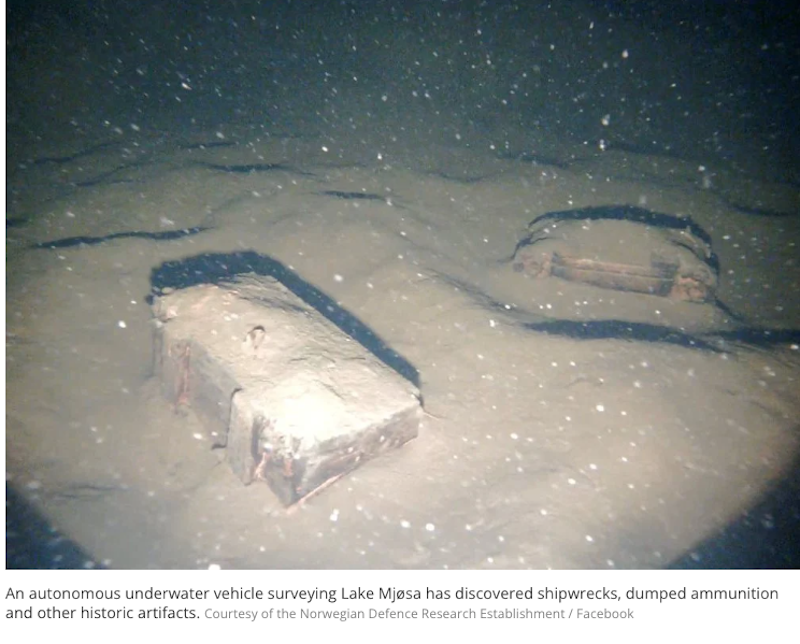 The vessel is located 1,350 feet below the surface of Lake Mjøsa

Archaeologists surveying the bottom of Norway’s largest lake believe they’ve discovered the remains of a 700-year-old ship, the Norwegian Defence Research Establishment announced in a statement earlier this month.

Lake Mjøsa, which is situated about 60 miles north of Oslo, has been a busy trade route since at least the Viking Age; more recently, between the 1940s and 1970s, it was a dumping ground for surplus ammunition. Scientists were mapping the lake’s bottom in an attempt to locate the surplus weapons—but they expected to discover a few older artifacts, too.

“Finding the wreck was almost a byproduct of the original mission to map dumped munitions,” Øyvind Ødegård, a marine archaeologist at the Norwegian University of Science and Technology, tells Live Science’s Tom Metcalfe. “I expected to find some things—that’s why I was participating in the project.”

After analyzing sonar images, archaeologists believe the ship is made of wood and measures 33 feet long. It’s located at a depth of 1,350 feet below the surface.

Though the images are fuzzy, researchers can make out what they think is a stern, which suggests crews constructed the vessel sometime after the 1300s. Before that, shipbuilders focused primarily on producing Viking ships, which were nearly identical on both ends. After roughly 1300, vessels usually had a distinct bow and stern.

Based on the sonar images, archaeologists also believe the ship’s builders used a Norse technique—overlapping the planks of the hull—to make the vessel lighter. The result is what’s known as a “clinker-built” ship. Later shipbuilders switched to “carvel-built” ships, which were made with smoothly joined planks.

Archaeologists also suspect that the vessel has a central rudder; in contrast, Viking ship rudders were usually located on the right side of the hull. At the same time, the vessel may have had a single mast with a square sail, similar to a Viking ship.

So far, researchers haven’t been able to get a better look at the vessel using cameras because of bad weather and poor visibility. They hope to scope out the shipwreck more extensively next year.

Previously, some 20 shipwrecks have been identified in the lake’s shallow waters. But this is the first expedition to explore deeper parts of the lake beyond the roughly 20 to 30 meters (65 to 98 feet) accessible to scuba divers.

Archaeologists may find other shipwrecks and artifacts before their work is done. So far, they have mapped just 15 square miles of the 140-square-mile lake using an autonomous underwater vehicle called Hugin. As Ødegård tells Science Norway’s Ida Irene Bergstrøm, the lake is “like a mini-ocean.”
“Because this is a freshwater lake, the wood in such a ship is preserved,” he adds. “The metal may rust, and the ship may lose its structure, but the wood is intact. A similar ship to the one we now found would not have survived for more than a few decades if it had gone down on the coast. So if we are going to find a Viking shipwreck in Norway, then Mjøsa is probably the place with the most potential for such a find.”