A TRAGEDY OF ERRORS Launched without a name, unwanted. In mid-life, neglected and abandoned in Naples for seven years. 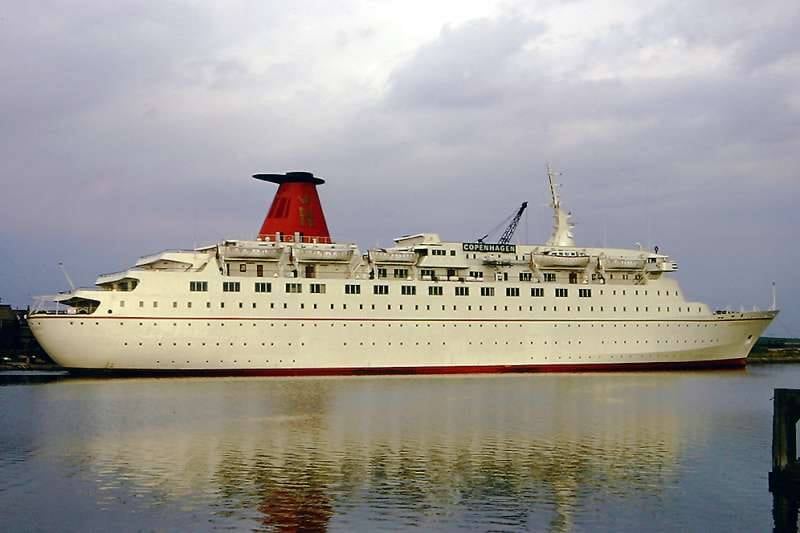 Designed by the renowned Knud E Hansen (reputedly as one of four intended sisters) and built by the world-renowned Vickers-Armstrong Shipbuilders at Barrow-in-Furness in the 1970’s (making her the last passenger ship built in Barrow), she was conceived to the order of K/S Nordline A/S, Copenhagen, with the intended name “Prinz Heinrik of Denmark” for cruise service on the U.S west coast and Alaska. In the first of a line of tragic errors, however, in February 1971, work stopped on the newbuilding as (reportedly) Nordline encountered temporary financial problems.

Ø Other reports suggested that Nordline refused to pay the escalating cost of the newbuilding but, whatever the truth, seven months on, in November 1971, work recommenced and, on 12 December 1972, she was finally launched – but without a name or ceremony – just a yard number, 1085.

Ø Due to the mounting backlog of naval work (for which the shipyard is most famous), completion and fitting-out of 1085 was subcontracted to Swan Hunter shipyard on the Tyne, to where she was towed in March 1973. On completion, however, following sea trials in April 1974, Nordline again fell into financial difficulties and the ship, now named “Copenhagen”, returned to Barrow to await a new buyer.

Ø After thirteen months laid up at Barrow, in May 1975, she was acquired by the then Soviet Union’s Black Sea Shipping Company (BLASCO), renamed “Odessa”, and placed on worldwide cruising. But, then, fast-forward 15 years and, when the Soviet Union ‘unravelled’ in the early1990’s, she (along with an armada of other ships) fell under the Ukrainian registry, and her slow demise began. By 1995, it was reported that the (by then) Ukrainian-owned BLASCO had mounted up debts of US$300 million and, apart from 24 other ships worldwide, at the demand of German creditors, “Odessa” was arrested in the course of a Mediterranean cruise with 360 passengers aboard, and laid up in Naples, where she stayed, neglected and deteriorating, for seven years.

Ø At one stage, during a marshal auction in 1999, she was reportedly sold to Golden Globe Shipping of Kingstown, St Vincent & The Grenadines, but this failed to materialise. In November 2001, rumours circulated that a Luxembourg company named as De Malo & Partners, headed by one Patrick Wetter, were negotiating to purchase the ship. In fact, according to reports dated 19 July 2002, it seems the “Odessa” was acquired, registered under the Panamanian company Bowline SA, and moved to the port of Odessa pending a full refit and restoration. But, it seems, as with Nordline, the new owners lacked finance and, once again, the poor ship remained laid up awaiting her fate, with no work having been carried out.

Ø In October 2005, her registry was changed to the Comoros flag – always an indication of what lay ahead. Sure enough, in December 2006, she was reported sold to Bangladeshi shipbreakers in Chittagong and, renamed “Sydney”, made ready for her final journey. But, even then, as a final twist to this tragic but once-beautiful cruise ship, on route through the Suez Canal, she was resold to Indian breakers, finally arriving at Alang in January 2007. 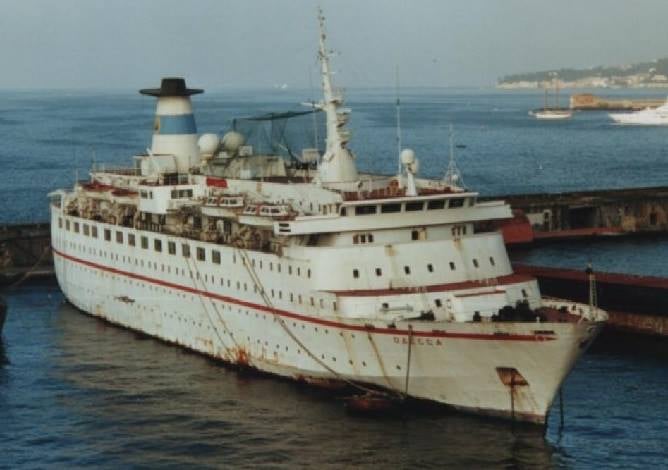 Ø The “Copenhagen” / “Odessa” was a wonderful little cruise ship (just 136 metres, 13758 GT, just 556 passengers), sadly the subject of tragic misfortunes throughout most of her life. Very little is known about K/S Nordline A/S, except that it is recorded as a Danish limited partnership with about 850 partners which (it has been suggested), like many other Danish limited partnerships in 1970, emerged from the desire to take advantage of the then Danish tax rules, rather than any desire to operate a cruise company. This may be substantiated by the suggestion that Nordline would charter the ship to Paquet Cruise Line. Certainly between 1982 and 1995, she was chartered by Transocean Tours.