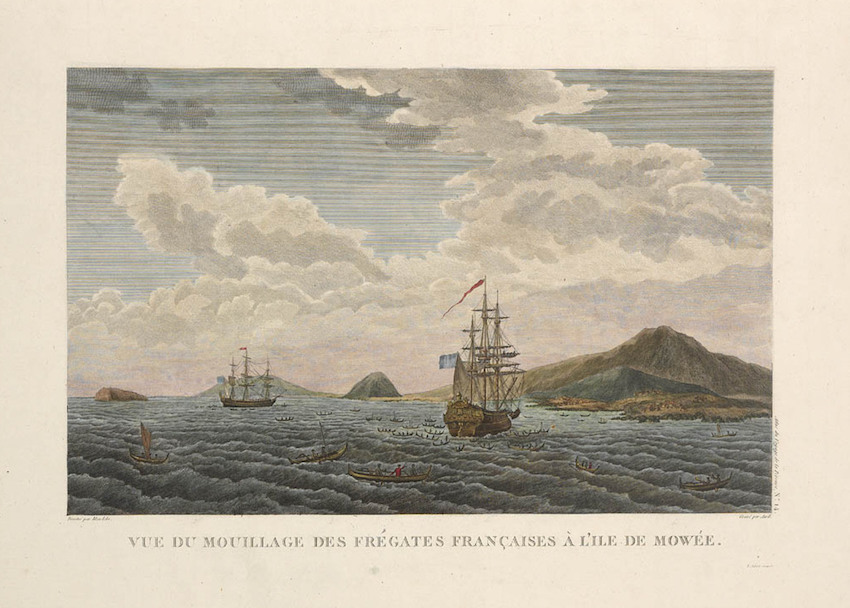 In 1785, King Louis XVI of France, inspired by the voyages of Captain Cook, commissioned noteworthy naval officer, Jean François de Galaup de Lapérous to embark on an expedition of science and discovery into the Pacific. Earlier in his career, Lapérous had served with distinction in the Seven Years War against the British in Canada. He had also served in India, Madagascar, Mauritius and the Seychelles.

Laperous was given two ships, the frigates Astrolabe and Boussole.

After heading down through the Atlantic he rounded Cape Horn and sailed into the Pacific. He called at Conception in Chile and then sailed towards the American North-West coast, calling at Easter Island and Hawaii on the way. From the Spanish settlement at Monterey, he sailed towards Alaska. He attempted unsuccessfully, to find the elusive North-West Passage that navigators believed connected the Pacific to the Atlantic.

Returning to Monterey he then sailed to Macao, China, the Philippines, the coasts of China, Japan, Korea and the eastern coast of the Russian Empire. He was cordially received by the Russians at Petropavlos, where he picked up mail from France. This contained instructions to proceed to Botany Bay to report on the British settlement.

Lapérous was a great admirer of Captain Cook. He had read all his journals and used the charts that Cook had made during his voyages of exploration in the Pacific.

When Lapérous sailed into Botany Bay on 26 January 1778, he expected to find a well-established settlement. Instead, he found the First Fleet about to leave for Port Jackson, which Captain Phillip had explored days previously and which was considered a superior site for the new colony. Captain Hunter of the British frigate Sirius went on board Boussoleand offered Lapérous any assistance that he might require. The British Fleet then sailed for Port Jackson.

Lapérous anchored his ships, Astrolabe and Boussole off the northern shore and set up camp. The nearby suburb La Perouse, that developed in later years bears his name. They remained there six weeks, during which time they planted a garden and built two long boats to replace those that had been destroyed during his visit to Samoa. Five official visits were held between the French and British.

Before his departure, Lapérous gave the current part of his journal to the British to take back to Europe. A priest on the voyage, Father Receveur, died during this time and was buried in the area. On 10 March 1788, Laperous left Botany Bay, headed towards New Caledonia.

They were never heard of again.