Last Days of the Loch Lomond 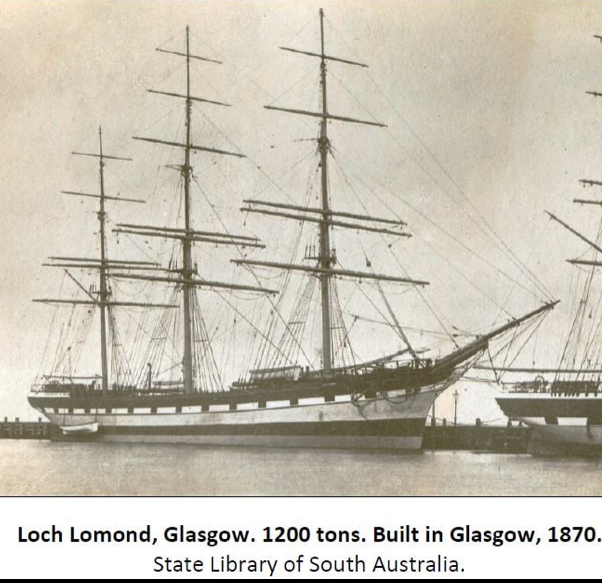 The Loch Lomond set sail from Greenock 2 days before Christmas 1907, straight into the teeth of a building storm. The Loch Lomond arrived in Adelaide on the 1st of April, she stayed in Port for a week to discharge the Adelaide portion of her cargo. Once completed the barque proceeded to Melbourne, where she landed the balance of her load. After a month at anchor in Hobson’s Bay, the Loch Lomond was put up for sale.

The ship was purchased for £3800 by the Union Steamship Company of Lyttelton, New Zealand. The company bought the Loch Lomond and another vessel, the Dartford with the intention of sailing both to New Zealand, and then converting them. After two weeks in port, the Loch Lomond set sail for Lyttelton, New Zealand with 1700 tons of coal, and 30 tons of coke aboard. She cleared the roadstead on Thursday the 15th of July 1908, sailing into fitful south-westerlies, clear frosty skies and calm seas. Running astride the wind Captain Thompson piled on sail as the Loch Lomond powered east by south across the Tasman Sea.

Raging southerly gales with frequent squalls and low cloud at times reduced visibility to a mile or less. Celestial navigation was impossible and Thompson was reluctant to attempt Cook Strait under such conditions. Onboard supplies were getting short however and soon a decision would have to be made. The cyclonic storm moved eastwards to a vicinity south of Norfolk Island, its position and ferocity caused many problems for shipping all across the Tasman. Easterly winds of 40 to 50 knots battered the Loch Lomond as she approached Cook Strait on August 6th.

The freshening easterly gales continued to build as the Loch Lomond approached Cook Strait on the morning of August 8th. The clipper sailed in under the leeward side of Arapawa Island. The lighthouse keepers of Brothers Islet light station took note of her struggle against the relentless forces of wind and tide. Unable to make any headway Thompson was forced to ‘bout ship before they could clear the narrows. The crisis point came at the turn of the tide when a rogue wave slammed into the stern of the barque. The spindrift-covered roller washed over the poop deck carrying away the wheel, binnacle, the top of the saloon skylight along with its protective brass grating, the spanker boom, a lifebuoy, a ladder, and part of the bulwarks near the break of the poop. The saloon and cabins were washed out, filling with seawater up to the wainscoted molding. The crew was quick to rig up a makeshift wheel which was soon bolted to the steering gear. The carpenter built an improvised binnacle, mounted into one of the ship’s doors. The tangled mass of fallen spars and rigging were reorganised as quickly as possible as the Loch Lomond ran before the wind back into deeper waters.

Unwilling to risk his vessel in the strait once again he decided to steer a course north-east, taking the Loch Lomond around the northern tip of New Zealand hoping to slip past North Cape and the Maria Van Diemen Lighthouse. James planned to slip through the channel separating Cape Maria from the Three Kings Island group situated several nautical miles to the northwest of Cape Maria Van Diemen.

Thompson and his officers had to rely heavily upon celestial navigation and outdated charts to guide them safely through the Three Kings Strait into calmer waters. The weather gods had another thing in mind for the Loch Lomond and her crew. The previous few days had been overcast making the getting of an accurate position fix all but impossible. Thompson had to rely upon the log, regular soundings with the lead his outdated charts, and a good dose of dead reckoning to stave off disaster. In the early hours of Wednesday the 19th of August 1908, the full force of the approaching Antarctic storm slammed into the west coast of New Zealand. It was also at this time that the Loch Lomond was making her run through the channel. The clipper disappeared into a rolling bank of fog, sea haze, and heavy rain as she entered the Three Kings Channel.

After 63 days at sea with no word of the Loch Lomond’s safe arrival at Port Lyttelton, the Victorian Marine Board began an initial inquiry into the barque's probable loss.

Questions were raised about the vessel's seaworthiness and the loading of her cargo. Even though she had been destined to become a coal hulk, the Loch Lomond was still a seaworthy vessel more than capable of weathering a few days of dirty weather. However routine investigations continued. People’s worst fears were realised when several lifebuoys with ‘Loch Lomond’ painted upon them were found in the waters, and upon the shores of Great Barrier Island on October 9th 1908. A carpenter’s bench washed ashore in the same place the next day. Soon other smaller pieces of wreckage began to drift ashore all along the island’s northern beaches. All hope of finding the Loch Lomond or her crew was abandoned when wreckage started to appear along 90 Mile Beach, south of Cape Maria Van Diemen. A 50-foot-long ship’s spar, part of the bow abaft the bowsprit covered in scrollwork, painted in red hematite, parts of ships boats, painted white, parts of external doors, with white centers, with small flags, (½ union jack, ½ painted dark blue.) came ashore alongside splintered deck planking.

In New Zealand, the Department of Navigation was conducting its own extensive searches and investigation into the wreck and loss of 19 lives. The New Zealand Marine Department came to no conclusions about the fate of the missing barque other than to say she had more than likely come to grief near the Three Kings Islands.

In 1911 it was decided to resurvey and sound the entire area after the loss of several vessels; the Elingamite in 1903, the barque Elderland in 1906, the barque Loch Lomond in 1908, and the full-rigged ship "Forrest Hall" on Ninety Mile Beach in 1909. The last time the coastline and waters around Cape Maria and the Three Kings had been surveyed was in 1854.

The 1910-11 Marine Survey undertaken on the steamer Terra Nova discovered that the Three Kings had been incorrectly charted on existing maps. The islands were in the wrong place, and any vessels seeking to skirt the islands, or sail through the strait, in bad weather would have run straight into the middle of a maze of unmapped reefs, fingers of jagged rock and nasty shoals… To find out more you will have to read: “The Missing – Tales of those who never came home”.