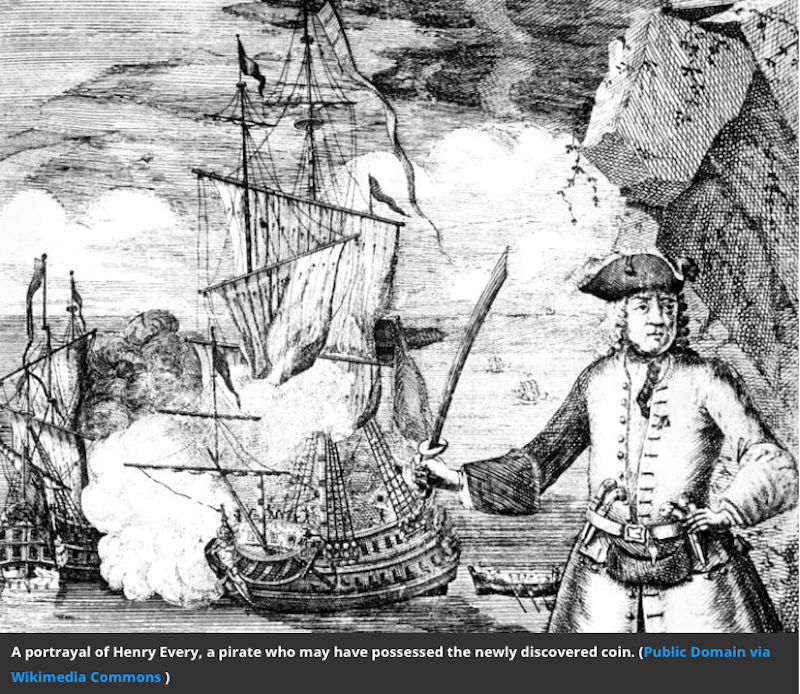 In 2014, a metal detectorist discovered a 17th-century Arabian coin in an orchard in Rhode Island. In the following years, other treasure hunters across New England uncovered even more Arabian coins from the same time period. But, according to the Associated Press, early European settlers weren't engaged in trade with merchants from the Arabic world, so how did they land in the colonies? New research conducted by amateur historian Jim Bailey connects these discoveries together in a new paper that attempts to fill in the details of this mystery and may help historians solve a long-lost pirate’s disappearance

As William J. Kole reports for the AP, Bailey first found the 17th century coin—which was minted in Yemen in 1693—in a fruit grove two years after he had unearthed a number of other colonial-era coins. The newly discovered coins—which are among the oldest excavated in North America—could prove that the notorious pirate captain Henry Every set foot in New England after he seemingly disappeared in 1696. Bailey published his findings in a research journal of the American Numismatic Society. “It’s a new history of a nearly perfect crime,” Bailey tells the AP.

After Bailey found the first coin, additional detectorists discovered ten more coins in Massachusetts, three in Rhode Island and two in Connecticut. Someone even discovered a coin in North Carolina, where Every allegedly landed with his crew after posing as slave traders.

“It seems like some of his crew were able to settle in New England and integrate,” said Sarah Sportman, the state archaeologist for Connecticut, to the AP. “It was almost like a money laundering scheme.”

Born in 1653, Henry Every—one of the most well-known 17th-century English pirates—served in the Royal Navy and on buccaneer and slave ships prior to turning to piracy in 1691, notes Encyclopedia Britannica. As Evan Andrews writes for History, when Every and his shipmates began pirating, they successfully scoured three ships near the Cape Verde Islands before setting their sights on larger targets.

On September 7, 1695, Every led his ship, the Fancy, to the Red Sea, so he could rob the Ganj-i-Sawai, which was the Indian emperor Aurangzeb’s ship. At the time, the vessel was carrying Muslim pilgrims back to India from Mecca, and it was also loaded with millions of dollars of gold and silver, writes the Independent’s Graeme Massie. When Every and his team invaded the ship, they attacked many of the men and raped the women, “[forcing] several [of them], which caused one person of quality, his Wife and Nurse, to kill themselves to prevent the Husbands seeing them (and their being) ravished," as quoted by Douglas R. Burgess Jr. in a 2009 Cambridge University Press article. Afterwards, Every escaped to the Bahamas, where his ship was either sold or destroyed.

The Mughal government didn’t take the theft lightly, so they retaliated and closed many of the English East India Company’s trading posts in India. In response, William III provided sizable bounties to anyone who captured Every and his accomplices, and eventually many of Every’s crewmen were caught, hanged or banished.

Every, on the other hand, evaded capture, and his fate still remains unknown. Historians only had proof that officials had arrested six of Every’s crewmen in near the Irish coast in 1696, but the captain himself was nowhere to be found, according to the Cambridge University Press.

But now, Bailey's research may provide evidence that the infamous pirate set foot in North America, where he pretended to be a slave trader in the 1690s by capturing black captives on the French island of Reunion. Documents also suggest that Every and his crew acquired a new ship, the Sea Flower, which docked in Newport, Rhode Island, with about 48 enslaved people in 1696, per the AP.

“There’s extensive primary source documentation to show the American colonies were bases of operation for pirates,” Bailey tells the AP.

The American Numismatic Society, however, in a blog post written by scholar Oliver Hoover, offered significant objections to Bailey's conclusions in a blog post. As outlined by Kiona Smith in Ars Technica, the dates on the coin may indicate a year after the attack on the Ganj-i-Sawai and Hoover suggests that New England trade was connected enough to global commerce such that Arabian coins could plausibly have arrived there in that period. After Bailey found the coin, he said that the most rewarding part of exploring is finding interesting items, not profiting off of his discoveries. “For me, it’s always been about the thrill of the hunt, not about the money,” says Bailey. “The only thing better than finding these objects is the long-lost stories behind them.”