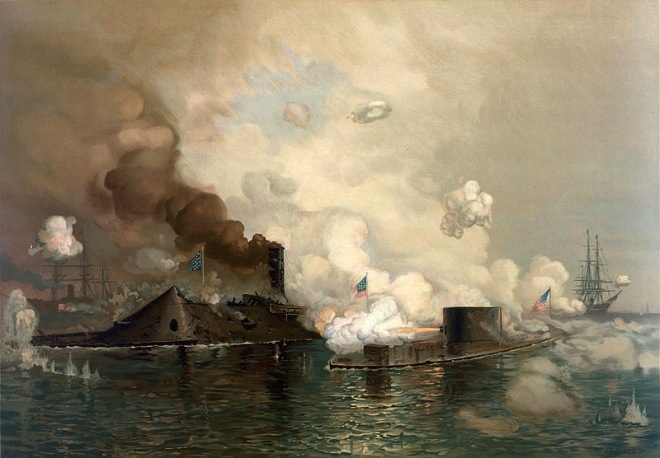 The battle took place at Hampton Roads, Virginia, where a day earlier the CSS Virginia (known popularly as the Merrimack, her name when she had been a frigate in the pre war U.S.f leet) savaged the Union blockade squadron anchored there.The Union guns proved ineffective against the armour plating protecting the Confederate marauder, allowing the ironclad to move in close and even ram and sink a ship. The Virginia was returning at daybreak to finish off the Union fleet when the ungainly USS Monitor showed up top engage it.

The Virginia was slow, difficult to manoeuvre and prone to engine trouble, but it outgunned the Monitor. During the battle the ships collided several times and were struck repeatedly by cannon fire, often at point blank range, but their protective plating prevented any severe damage. They slugged it out for several, inconclusive hours, until Virginia finally drew away.

The battle ended in a draw and the Union blockade of the James River continued. The significance of the engagement, however was lost on no one. The nature of naval warfare had been changed overnight, and forever. As one historian observed, the moment the Monitor engaged the Virginian battle, every navy on earth became obsolete.