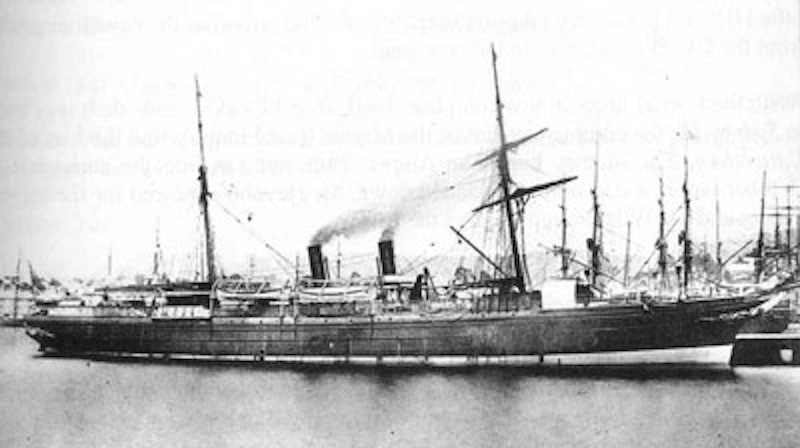 The SS Centennial was an iron single screw steamship built as the SS Albion in Greenock, Glasgow, Scotland, in 1863. She was 66 metres long and displaced 668 tons. A passenger and cargo vessel, the Centennial was a regular sight on the Sydney/New Zealand run.

On 23 August 1889, the Centennial arrived in Sydney and quickly took on a load of 52 passengers and wool before leaving for Wellington, New Zealand at 8.45pm. As she approached Bradleys Head, the collier SS Kanahooka in-bound from Wollongong, was travelling up the western channel (that is, the correct channel). As the Centennial passed Bradleys, the two vessels came together, the collier striking the passenger liner on the starboard side. The blow was such that coal started falling into the water and the passengers on deck could see that the Centennial was doomed.

Captain C.G. Lessing attempted to run the ship aground on Taylors Bay Beach which is adjacent to Bradleys Head but she could not make it. Within six minutes, the Centennial had sunk, with its masts sticking out of the water. All 52 passengers and 30 crew were taken off the ship without incident by a number of vessels, including the Kanahooka, the Bee and the pilot vessel Captain Cook.

The Kanahooka then continued to Circular Quay where she off-loaded the victims, including one man who had ended up in the water with badly smashed legs. The Kanahooka then uploaded its cargo of coal into the P&O ship Victoria before herself being drydocked to repair the severe damage she suffered.

The New South Wales Marine Board subsequently found Captain Lessing liable for the collision and suspended his master’s certificate for a year. Centennial itself was later salvaged and broken up with underwater explosives in an effort to remove it as a hazard to navigation.