The Forgotten American Explorer Who Discovered Huge Parts of Antarctica 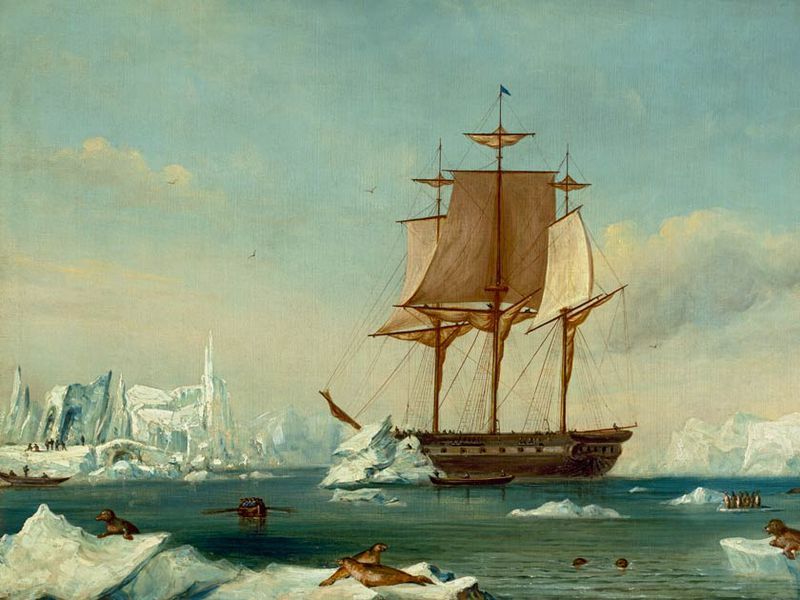 The early-1900s exploits of intrepid explorers like Robert Scott and Edward Shackleton captured the public imagination. With the benefit of cameras and deft handling of newspaper media, the Edwardian British explorers, alongside their Norwegian rival Roald Amundsen, established themselves as heroic polar pioneers. In the process, however, the south polar exploits of their American forerunner, Charles Wilkes, have been largely forgotten.

It was the round-the-world expedition by Wilkes—whose scientific collection constituted the first treasures of the infant Smithsonian—that first established the continental dimensions of Antarctica. But in a twist of 19th-century international politics, that claim to Antarctica was denied to the Americans by the pole-hungry British. Fast forward to today, and the United States finds itself in another nationalistic race to capitalize on the frozen southern continent. This time, its sparring partner is China.

Amundsen might have been the first man to reach the South Pole, in 1911, but the discovery of the Antarctic continent occurred several generations earlier. In January 1840, when Wilkes was commander of the United States Exploring Expedition, he charted 1500 miles of the east Antarctic coastline in his flagship U.S.S. Vincennes. Before this American expedition, only small, rocky outcrops of Antarctica had been sighted. Most exploreres believed an open polar sea or, at most, a scattered archipelago lay at the planet’s far south.

In a remarkable coincidence, a French expedition led by the legendary Jules Dumont D’Urville reached the same stretch of coastline on the same day. But D’Urville stayed just long enough to plant the French flag on a tiny offshore island before sailing back north. Wilkes, meanwhile, against the advice of his medical staff and officers, braved the cold, ice, and howling katabatic winds to claim glory for the Vincennes.

Charles Wilkes barely had time to announce his Antarctic triumph before British rival James Clark Ross (celebrated discoverer of the North Magnetic Pole) began to steal his thunder. Wilkes’s mistake was to send the lagging Ross his historic first chart of the east Antarctic coast. A year later, when Ross retraced Wilkes’s route, he found the American had been deceived in places by glacial reflections and had mistaken ice shelves for actual coastline, marking it several degrees too far north. These errors did nothing to undermine the substance of Wilkes’s discoveries, yet Ross and the British Admiralty built a public case against the American claim—with great success. Most 19th-century maps of Antarctica do not recognize Wilkes’s remarkable 1840 feat. Even his obituaries in American newspapers made only passing mention of Wilkes’ polar discoveries.

In the 20th century, Wilkes would finally get his due. In 1912-13, Australian explorer Douglas Mawson was the first to revisit the east Antarctic shores mapped by the Vincennes. Mawson so admired Wilkes’ navigation of the ice pack in a wooden sailing ship that he christened the entire coast “Wilkes Land,” which remains the largest continuous territory on Earth named for a single individual.

Wilkes’ rehabilitation reflected the changing power dynamics of the polar great game. The British and French eventually ceded the argument, and corresponding territory, to the United States as the world’s emerging polar power. During the Cold War, the United States continued to assert its leadership in Antarctic affairs, brokering the international Antarctic Treaty of 1958 and investing in cutting-edge polar research. Much of what we know about climate change, for instance, comes from secrets revealed in drilling Antarctic ice cores, an outgrowth of America’s interest in polar science.

Today, the Antarctic landscape is changing—and not just from melting glaciers. America’s interest in Antarctica appears to be waning, and so too is its influence.

In the decade following the 2008 global recession, funding for the Office of Polar Programs, which oversees American facilities and research in Antarctica, fell by 8 percent. Plans for the long-overdue replacement of aging facilities at McMurdo Station, the United States’ Antarctic headquarters, were drawn up during the Obama administration, but a further proposed cut of more than 10 percent in the 2021 budget places those rebuilding plans in jeopardy just as work is set to begin. Without modernization of McMurdo, which in its size and sophistication has long been the envy of other nations, the perception of America’s declining interest in Antarctica will grow.

China, long relegated to spectator status in Antarctic affairs, stands to gain the most. With four Antarctic stations already, China is now in the advanced planning stages for a fifth station—this one to be located in the heart of “downtown” Antarctica, on an island in the Ross Sea adjacent to McMurdo. The image of a rusting, outdated American station alongside a gleaming, state-of-the-art Chinese facility will communicate more clearly than a hundred polar policy papers the reality of the power transfer already under way in Antarctica, where China’s investments in icebreakers, communications hardware, and station infrastructure dwarfs that of other nations, including the United States.

The French, British, and American expeditions of the 1840s sailed south in the hope of discovering a Terra Australis laden with mineral treasures, only to find towering glaciers and deathly cold. A couple of centuries later, it’s China that is determined to reap Antarctica’s mineral riches.

As the northern ice melts, the Arctic Ocean is already the scene of international jockeying for mining rights. But as China scholar Anne-Marie Brady has documented extensively, Beijing views Antarctica as the last great terrestrial frontier on Earth, hosting great deposits of coal, natural gas, precious minerals, added to plentiful fish stocks in the surrounding ocean and even vast freshwater reserves locked up in Antarctic ice. China intends to exploit the continent fully once the current Antarctic Treaty expires in 2048, if not sooner. With nations hungry for new sources of oil and mineral wealth, and China laying the groundwork for industrialization of the pole, the stakes for Antarctica couldn’t be higher.

An obvious irony looms over this new Antarctic rush. If Antarctic glaciers are already melting, and the consequent sea-level rise threatens to inundate coastal cities across the globe, why would any government make plans to exacerbate global warming by exploiting fossil fuel reserves in Antarctica? Will the 21st century end with oil fields in an ice-free Wilkes Land or strip-mining in the forested Transantarctic Mountains that are currently buried in ice? It seems outlandish, but this is exactly the future that Beijing’s plan could trigger, even if public pronouncements from China conform to the diplomatic polar language of international collaboration and disinterested scientific research.

As the nation with the greatest historical investment in Antarctica, the U.S. has the resources and authority to lead an international re-commitment to south polar conservation. By reaffirming its leadership role at the pole, America can ensure that the great game of the 21ar century does not repeat the mistakes of those of centuries prior, when the world’s pristine frontiers were fought over and ransacked with little thought for environmental damage, or for what future human generations might do once the last wilderness on Earth melts away.

By Gillen D’Arcy Woo   This story is adapted from the author's new book Land of Wondrous Cold: The Race to Discover Antarctica and Discover the Secrets of its Ice.