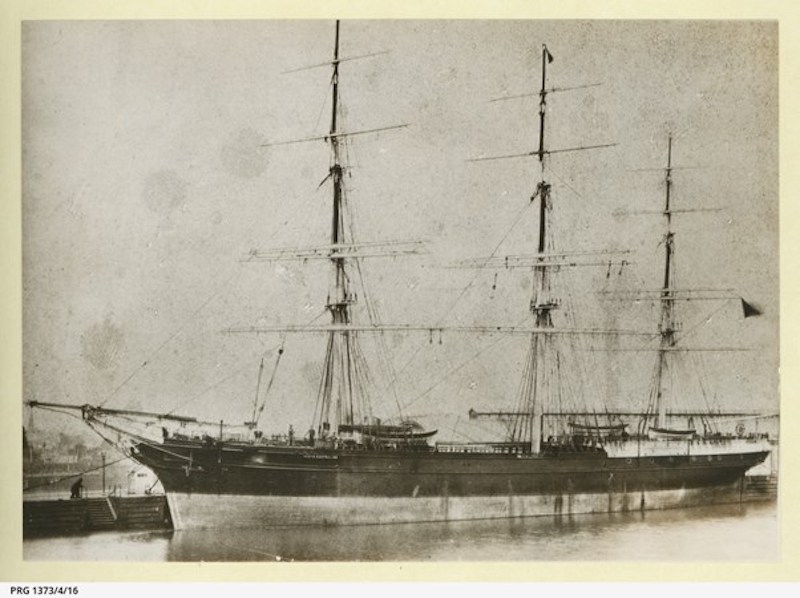 The clipper South Australian was built at North Sands, Sunderland, 1868 by William Pile for Devitt & Moore's "Adelaide Line" of packets.

Captain Bruce supervised the construction and she was "christened" by a daughter of Henry Martin, a South Australian part-owner.

The South Australian sailed annually between London and the state of South Australia for about 20 years, carrying heavy goods such as coal and large construction materials. It is known to have delivered the Victoria Bridge to Australia in July 1869 which spanned the River Torrens, the most significant river of the Adelaide Plains.

South Australian was sold to William J Woodside of Belfast in 1887, and carried cargo to India and New Brunswick under the command of Captain James Arthurs.

On 13 February 1889 while on a passage from Cardiff to Rosario, Argentina loaded with railway track and fishplates, she ran into a gale off Lundy Island and the captain decided to run before the wind. As the ship rolled in the tremendous seas the cargo began moving about in the hold as a solid mass and in the early hours of the 14th broke through the hull. As the ship began to sink a lifeboat was deployed under difficult conditions and all but one of the crew was saved, being picked up by the schooner Spray and carried to Swansea by the steam trawler Flying Scotchman after drifting for twelve hours.

The cargo of iron was discovered in 1986 at a depth of 42 metres (140 ft) in theBristol Channel by members of the Ilfracombe & North Devon Sub-Aqua Club.

The South Australian is protected as the only clipper ship wrecked in English waters that was built during the first decade of clipper ship construction. The most obvious feature of the wreck is the large stack of iron rails extending some 3.8 metres above the seabed.