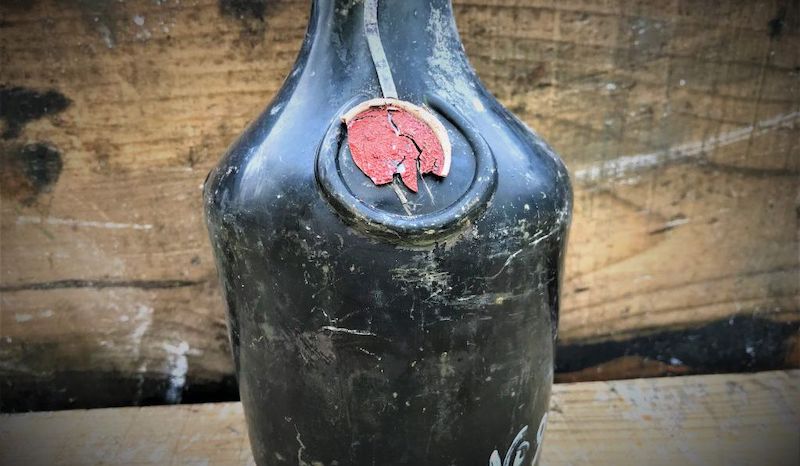 Ocean explorers have salvaged 900 bottles of booze from a ship sunk in the Baltic Sea while on its way to restock Tsar Nicholas II’s liquor cabinet in May 1917.

According to a press release, spirit salvagers from Ocean X—a company that specializes in tracking down historic spirits lost in shipwrecks—recovered 600 bottles of De Haartman & Co. cognac and 300 bottles of Benedictine liqueur from the wreck of the Swedish steamer Kyros.

The long-lost alcohol shipment, sent from France via Sweden, was initially scheduled for delivery to Russia’s emperor in December 1916. But heavy ice in the Sea of Bothnia kept the Kyros in port until May 1917, and when the ship finally began its journey, it was intercepted in the Sea of Aland by the German submarine UC-58.

Sweden was a neutral party during World War I, but as Tom Metcalfe reports for Live Science, Germany’s submarine fleet was under orders to sink any ships carrying materials that could help the Russian war effort. UC-58’s captain decided the steamer’s steel and machine parts were contraband, so he evacuated the ship’s crew and sank it with an explosive charge.

Expedition leader Peter Lindberg tells Agence-France Presse’s Tom Little that the Ocean X team discovered the wreck nearly 20 years ago but soon lost track of its position. Once the explorers relocated the ship at a depth of around 250 feet, they spent years removing old fishing nets in order to make the site of the wreck safe enough for divers.

“After we had been there several times with divers and a smaller [remotely operated vehicle], we realized that the situation was becoming too dangerous,” says Lindberg.

To reach the sunken aperitifs, Ocean X partnered with salvage company iXplorer. Thanks to a specially equipped ship dubbed “Deepsea Worker,” the team was finally able to recover the boozy bounty.

Lindberg and his colleagues have sent samples of both the cognac and the Benedictine to a laboratory to gauge whether the alcohol is still fit for consumption. They are optimistic regarding the outcome of these tests, according to Metcalfe, as the Baltic’s freezing waters are actually ideal for storing spirits. Although some of the bottles contain sediment, many remain sealed. Several cognac bottles even have intact tin seals.

De Haartman, the company behind the cognac, is no longer in business. Today, however, the variety of Benedictine liqueur found on the seafloor boasts ties with one of the world’s most well-known brands: Bacardi.

As Lindberg tells CNN’s Gianluca Mezzofiore and David Williams, he and the rest of the team detected a slight scent of sweetened herbs coming from the Benedictine bottles. Originally crafted by Benedictine monks, the liqueur has been made in France for 500 years. Lindberg says he can’t definitively claim the alcohol was destined for royalty. Still, he adds, the trove was at least destined for “the nobility around [Nicholas].”

Even if the shipment had made it to Saint Petersburg, it’s unlikely the tsar and his court would have had much time to sample their rich imports. In March 1917, the Russian Revolution led Nicholas to abdicate his throne; just over a year later, in July 1918, the tsar and his family were executed by the Bolsheviks.

Earlier this year, two bottles of 17th-century wine discovered by Ocean X went up for auction at Christie’s. And in 2011, a 200-year-old bottle of champagne found in another Baltic shipwreck sold for a record-breaking $43,000.

The value of the newly recovered trove remains unclear, but as Lindberg tells Little, “I don’t know if I can afford to keep a bottle for myself.”