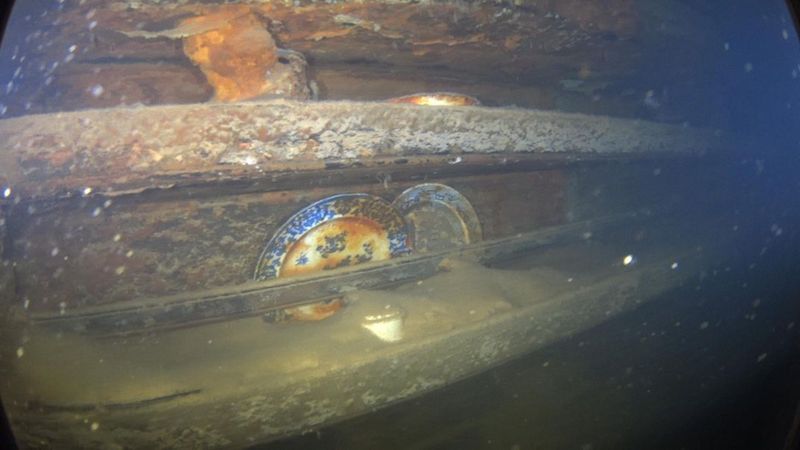 These eerie scenes came into view for the first time as underwater archaeologists finally got an extensive look inside the HMS Terror, one of two ships that disappeared in northern Canada during the doomed Franklin expedition of the 1840s.

“We see just a dizzying array of artifacts,” Ryan Harris, the lead archaeologist on the project with Parks Canada, said during a press conference. “The ship stands to tell us a great deal … about the specific circumstances of these men as they were confronted by their own mortality.”

The fate of the Franklin expedition remains an enduring mystery almost 175 years later. Arctic explorer and British naval captain Sir John Franklin and about 130 crew members embarked on an official mission to chart the last stretch of the Northwest Passage across the Arctic. They left aboard two ships, Erebus and Terror, from the U.K. in May 1845 and vanished in the Canadian Arctic.

“In a way, Franklin was the Amelia Earhart of his time,” says James Delgado, a maritime archaeologist, senior vice president of SEARCH and author of the book Across the Top of the World: The Quest for the Northwest Passage. “They were the best trained, best equipped, and had all the modern conveniences only to then go silent and to have the story slowly trickle out in a heartbreaking way.”

The loss of Franklin and his crew sparked a sensationalized search, which slowly turned up a grim smattering of artifacts, camps and graves across the Arctic, as well as testimonies from Inuit witnesses who met starving white men. In 1854, explorer John Rae heard accounts from Inuit people suggesting that some of Franklin's crew resorted to cannibalism in their final days. (Those grisly stories—which were later supported by archaeological evidence—prompted angry, disbelieving reactions from Franklin's widow and British public figures like Charles Dickens.)

In 1859, another explorer, Francis McClintock, found a note left in a cairn dated to April 1848. Written by Francis Crozier, Franklin's second-in-command and captain of the Terror, the message reported some dire news: The ships had become stuck in ice in Victoria Strait for more than a year, Franklin had died, and the remaining crew attempted to travel south on foot.

The shipwrecks were only located recently. Terror was discovered in 2016 about 80 feet below the icy surface of Terror Bay near King William Island, two years after its sister ship Erebus was found about 45 miles away. Parks Canada and its Inuit partners have been leading the study of the shipwrecks for the last few years, hoping their findings will offer new insights into one of the worst disasters in the history of polar exploration.

Because of the harsh climate and nearly year-round ice cover at the wreck sites, divers only have a window of opportunity of a few weeks each year to study the ships. This year's expedition set sail on August 7 from Cambridge Bay, Nunavut. Thanks to exceptionally clear conditions, the divers—clad in thick neoprene dry suits, full face masks and lobster claw-shaped gloves—were able to get footage of 90 percent of the Terror using a remotely operated vehicle (ROV) over seven days.

Harris told reporters that thanks to the remarkable water clarity and an abundance of light penetration from the surface, the divers were able to clearly see the seafloor for the first time. Consequently, the team was able to make an important observation: Terror's propeller was down as if in operating condition.

While the ship was lodged in pack ice for more than a year in Victoria Strait, the crew likely would have taken the propeller up and boarded over the ship's glass skylights, Harris said. But the divers found this was not the case. “It looks like the ship was in operating trim and then somehow maybe unexpectedly it sank,” Harris said. “With all the shipboard articles lining the shelves on both sides of the ship, it gives the appearance that the wrecking was not particularly violent. It settled almost vertically on the seafloor.” 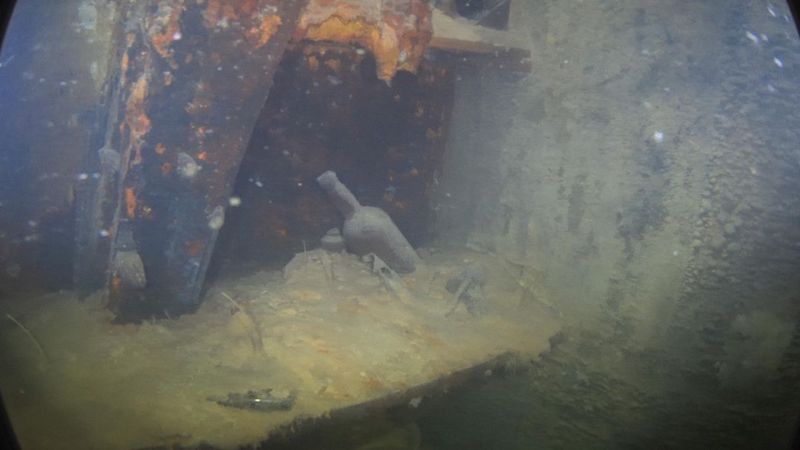 The divers did not enter the ship themselves, but the video footage they obtained will help archaeologists plan how to recover artifacts from the interior as soon as next year. In a video tour of the ship released by Parks Canada, you can see the intact blue and white china on the shelves in the room where sailors would have eaten meals together (around the 2:45 minute mark in the video above) followed by a tour down the dark corridor with open doors leading to the officers' individual rooms. “As we venture tentatively through each cabin, one after the next, you get the arresting notion that you're physically inside the private shipboard space of all these individuals, that you are this close to their personal lives,” Harris said.

Perhaps the most tantalizing sight in the interior of the ship is Crozier's sediment-covered desk (at the 4:38 mark in the video). The ice-cold water and darkness inside the desk drawers could provide ideal conditions for the preservation of normally delicate paper, Harris said. He thinks there's reason to suspect the desk could contain documents that shed light on when and why Terror and Erebus parted company and how they got to their final locations.

“A number of us have always speculated that what lies inside is going to be more than just dishes or instruments or a preserved cabin,” Delgado says. “These guys kept journals. They had artists who made sketches. They also had a camera. They were taking daguerreotypes. Some of that stuff is likely going to be in the ship's interior. … This is an opportunity to write the next chapter in what happened in that expedition.”
Crozier's sleeping cabin was the only closed room the team encountered on its reconnaissance mission. “That's fairly tantalizing,” Harris said. Crozier's personal affects, and perhaps additional private documents like journals, could be hidden behind that closed door. “You never know what we might encounter.”