The Medieval Cog and Its Use in History 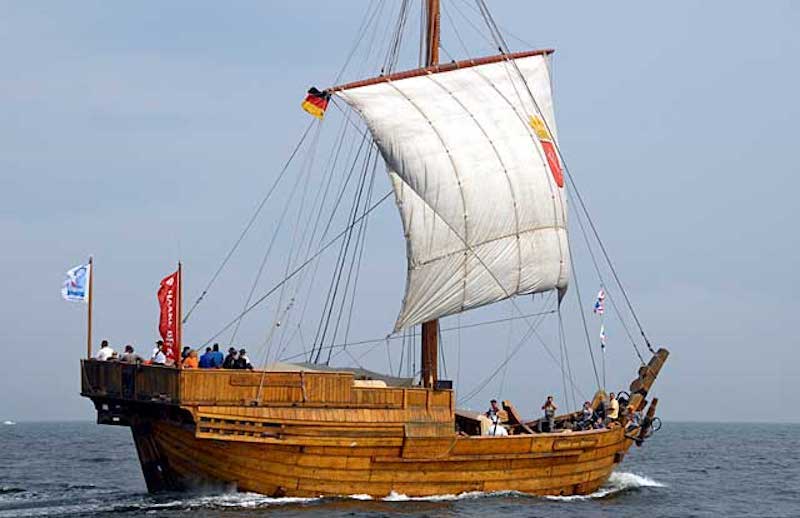 The cog is a type of ship that appeared in the medieval period in the 10th century and it was widely spread across the sea into the 12th century. It was mainly made from oak and the particular timber that could be found in the Baltic region of Prussia. Cog’s were used primarily for trade in medieval Europe, especially in the Baltic Sea by the Hanseatic League. A cog could be around 15m to 25m in length and it could carry around 200 tons. Carrying this huge weight was key for the dominance of sea trade. A person could carry a lot less on foot, it’s slower and more dangerous. Cogs were also used as warships.

It was a round ship that had a laid flat bottom but has overlapped strakes near the posts. They had a full clincker planking covering the ides and double-clenched iron nails for the planks. The keel was thicker then the strake, cogs could also used to have open hulls and they could have been rowed in short distances if needed.

As mentioned they appeared and was first mentioned in the 10th century, to be precise in 948 near Amsterdam. But these cogs were influenced by the Norse Knarrs which were the current top trading vessels in the north part of Europe for the current time.

Archeologists think that the birth of the cog could be found in Western Jutland by the current findings. The theory on how these ships emerged and were developed it’s pretty interesting. The main factor was the trade and Limfjord. This place was in the north part of Jutland and was used for trade in the North sea and Baltic. But because of bad geographical conditions and currents the passage was constantly blocked, this was causing massive trouble and delay for the traders. Bigger ships couldn’t be pulled across the blockaded path and major modifications to their old ships had to be made, their structure had to be changed.

The cog was constantly changed and it could be monitored by the archeological findings, the ship was new and improved and it wasn’t just a simple ship. It could pass around dangerous terrain and still carry a big load. Some gadgets were added for protection against pirates and this would result for later use in warfare.

With the constant advancement of the cog it was until the 14th century where it reached it’s limits and people thought that a new and improved ship should be invented. The replacement for this ship was the hulk, it was already invented but it needed some replacements. There are many archeological findings of cogs and the most famous one is the Bremen cog from 1380.