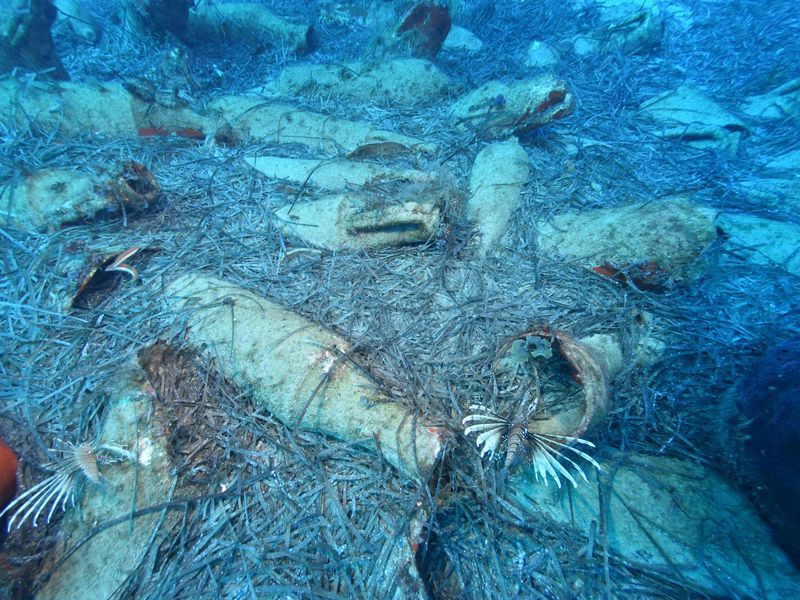 During the days of the Romans, a cargo-laden ship sank in the waters off Cyprus. The wreck lay at the bottom of the sea, untouched, for centuries—until it was spotted recently by two volunteer divers. Other major discoveries of Roman shipwrecks have been made in recent years, but the new find is significant because, according to Lizzy Ioannidou of Cyprus Mail, it is the first Roman-era ship to be found near Cyprus in “good condition.”

Spyros Spyrou and Andreas Kritiotis, volunteer divers affiliated with the Maritime Archaeological Research Laboratory, located the wreck off Protaras, a resort town in eastern Cyprus. They reported their discovery to the island’s Department of Antiquities, which quickly set about securing the funds to examine the ship in situ.

Not many details have been released about the shipwreck, but the Department of Antiquities notes that it “is the first undisturbed Roman shipwreck ever found in Cyprus.” The vessel is still packed with amphorae—jugs that the ancients used to hold foodstuffs like oil and wine—that likely came from Syria and Cilicia, a region that is now southern Turkey.

The discovery suggests Cyprus’ importance as a link on the trade route that once spanned across the Mediterranean. The island’s strategic position certainly made it desirable to the powers of the ancient world, and over the course of its history, Cyprus came under the control of the Persians, the Hellenistic Ptolemies and, in 58 B.C., the Romans. According to the Metropolitan Museum of Art, Cyprus “prospered” during the Roman period and maintained its significance in the region’s maritime trade network.

The newly unearthed vessel, alas, did not fare well on its journey at sea. But according to the Department of Antiquities, archaeological investigations into the wreckage are “expected to shed new light on the breadth and the scale of seaborne trade between Cyprus and the rest of the Roman provinces of the eastern Mediterranean.” Work is already underway to document and protect the site.

More than a decade ago, researchers began combing through another significant shipwreck found near Cyprus, this one dating to the late Classical Period, before the Romans came to the island. Known as the Mazotos Shipwreck, this vessel also still held its amphorae, one of which was stuffed with olive pits—“possibly for consumption by the crew,” according to the Maritime Archaeological Research Laboratory. Similarly fascinating details may soon emerge about the Roman ship, as archaeologists continue to explore the site where it met its ill-fated end.