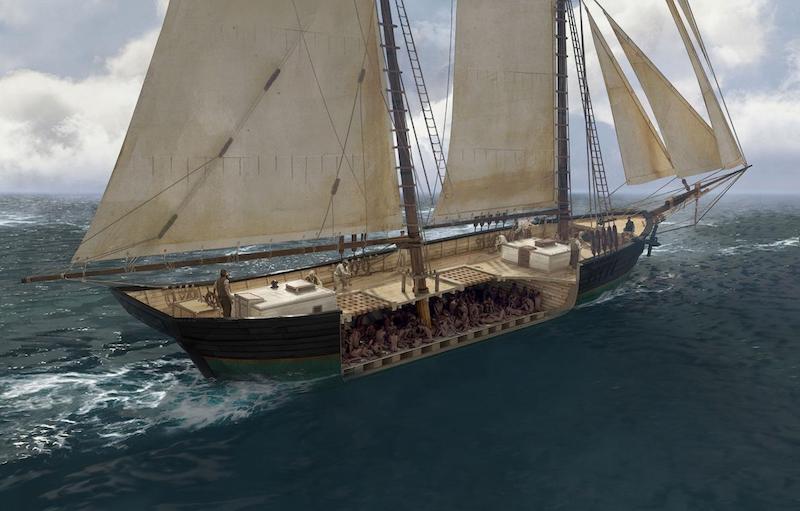 The last ship known to have smuggled slaves from Africa to the US is said to have been discovered after a year-long investigation.

The remains of the Clotilda were found at the bottom of the Mobile river in Alabama.

The ship was used to smuggle men, women and children into America from Africa.
It operated in secret, decades after Congress banned the importation of slaves, and was intentionally sunk in 1860 to hide evidence of its use.

"The discovery of the Clotilda is an extraordinary archaeological find," Lisa Demetropoulos Jones, executive director of the Alabama Historical Commission (AHC), told the Associated Press (AP) news agency. The ship's journey "represented one of the darkest eras of modern history" and the wreck provides "tangible evidence of slavery", she said.

The Clotilda was discovered by archaeology firm company Search Inc, which was called in to help by the Alabama Historical Commission to investigate the hulk, says the National Geographic Society, which reported the find.

Researchers discovered a ship with its identifying features under water in a section of the Mobile river, says National Geographic.

The dimensions and construction of the wreck matched those of the Clotilda, as did building materials, the commission said.

"We are cautious about placing names on shipwrecks that no longer bear a name or something like a bell with the ship's name on it," maritime archaeologist James Delgado said in a statement. "But the physical and forensic evidence powerfully suggests that this is Clotilda.

The US banned the importation of slaves in 1808, but the slave trade carried on beyond this date as there was still demand for workers from southern plantation owners.

A wealthy landowner and shipbuilder from Mobile is said to have made a bet with northern businessmen that he could smuggle a cargo of African slaves into Mobile Bay under the nose of federal officials, National Geographic says.

The Clotilda carried 110 men, women and children from Benin to Alabama in 1860, according to historians.

Marine archaeologists recovered nails, spikes, and bolts used to secure the ship's beams and planking. Made of hand-forged iron, such fasteners were common in schooners built in Mobile in the mid-19th century.PHOTOGRAPH BY MARK THIESSEN, NATIONAL GEOGRAPHIC

"It's the best documented story of a slave voyage in the western hemisphere," historian Sylviane Anna Diouf - who relied on testimony from the slave traders and their captives, some of whom lived in the 20th Century - told National Geographic.Some descendants of those carried on the ship still live nearby in an area that came to be known as Africatown. They have welcomed the discovery.

"I think about the people who came before us who laboured and fought and worked so hard," Joycelyn Davis, a sixth-generation granddaughter of one of the slaves, told AP. "I'm sure people had given up on finding it. It's a wow factor."