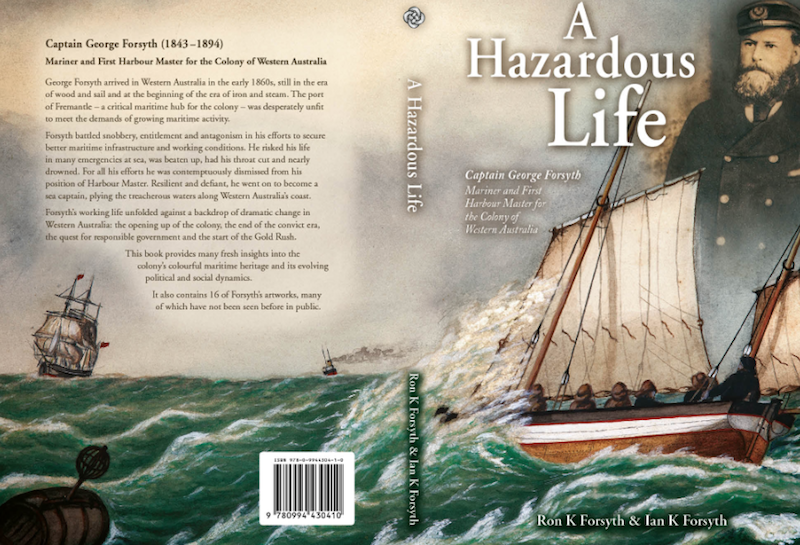 You may be interested to look at our new book on WA's colonial maritime history which has just been published by the Maritime Heritage Association (WA). The book is titled 'A Hazardous Life Captain G Forsyth (1843- 1894) Mariner and first harbour master for the Colony of Western Australia'. It includes a foreword by the former Governor of Western Australia, Hon K Sanderson AC, and was generously launched at Fremantle Ports last week, hosted by Captain Allan Gray, Harbour Master Fremantle and President of the International Harbour Masters' Association.

Our book is based on years of research of historical documents and, in addition to being a biography of a man who lived a dramatic life at sea, it  adds considerably to the recorded maritime history of the State of Western Australia, particularly of its port operations. It also contains considerable fresh material on ships and incidents of shipwrecks in Western Australia at the beginning of the end of the era of wood and sail and the beginning of the era of iron and steam.

George was at the epicentre of the colony's critical, dangerous and challenging port operations for some twenty years, including as a port pilot, harbour master and inaugural head of the WA Department of Harbour and Light (1879), which administered all the colony's ports. He was also the founding commanding officer of the Fremantle Naval Volunteers and a competent amateur artist. The Fremantle Arts Centre will be holding an exhibition based on his art as part of the Fremantle Festival 2019, opening 8 June. His paintings include depictions of the harbour master's boats and of other nautical themes. Copies of sixteen of his paintings are included in the book.

Having served four governors, George was dismissed from all his public service positions in 1885 by the Broome administration in what were highly controversial circumstances. The Naval Volunteers faded quickly thereafter and was folded into and army volunteer unit. George then became a master mariner, sailing mainly to the NW of the colony and the Straits Settlements.

We hope you might find interest in our book and perhaps find a way to bring it to the attention of your members.  We would be happy to assist you with that if we can.