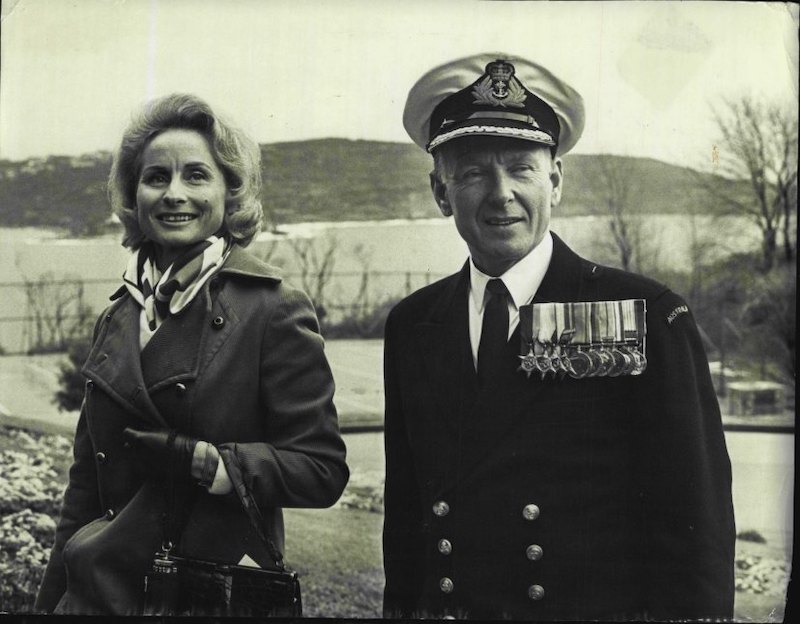 J P Stevenson at the time of his court martial, with his wife, who campaigned and wrote two books about his case

CAPTAIN J P STEVENSON, known as “Steve”, who has died aged 97, was a distinguished Australian naval officer whose career was ruined by a collision and the subsequent mishandling of court proceedings.

In the early hours of June 3 1969 Stevenson was commanding the Australian aircraft carrier Melbourne, in the South China Sea, when the American destroyer Frank E Evans, in changing station, turned across Melbourne’s bows and was cut in two. The forward section of Evans sank immediately with the loss of 74 lives.

Despite Stevenson’s previous clear orders and immediate warnings, and the admission that Evans’s captain had been asleep in his cabin, a joint American-Australian board of inquiry in Subic Bay in the Philippines, presided over by the American officer who had been in tactical command of Evans, held Stevenson partly responsible. It stated that he could have done more to prevent the collision from occurring.

The integrity of the board of inquiry was questioned, and at Stevenson’s subsequent Australian court martial his defence counsel, Gordon Samuels, QC, argued that he had “never seen a prosecution case so bereft of any possible proof of guilt”. The court martial found there was no case to answer, and in dismissing the charges, honourably acquitted Stevenson. Nevertheless, amid an outcry that he had been made a scapegoat, he was given a minor, remote appointment and he resigned, thus ending a distinguished and active 35-year career.

John Philip Stevenson was born on August 24 1921 in Melbourne to a naval family, and entered the Royal Australian Naval College as a 13-year-old cadet in 1934. There he earned colours for tennis, and on his passing out was awarded the science prize.
His first posting, as a midshipman, was to the Australian heavy cruiser Canberra, before further training in the Royal Navy. He was in the British heavy cruiser Shropshire in the Mediterranean when war broke out.

During those early months, Shropshire took part in the hunt for the German pocket battleship Graf Spee, forced the blockade-runner Adolf Leonhardt to scuttle herself and escorted the damaged HMS Exeter home after the Battle of the River Plate.

After courses ashore in England and promotion to sub-lieutenant, Stevenson joined the brand-new destroyer HMAS Nestor on the hunt for the German battleship Bismarck in the Atlantic in May 1941.

On December 15 1941 Nestor was off Cape St Vincent when she sank the German U-boat U-127. However, on June 15 1942, while part of the escort of Operation Vigorous, a convoy to Malta, Nestor was so badly damaged by enemy air attack that she was scuttled. Stevenson was among those lightly injured men who were rescued by HMS Javelin.

Quickly recovered, he served in the destroyer HMAS Napier in the Indian Ocean before re-joining Shropshire, which had been transferred to the RAN. Shropshire served in the Pacific campaign from 1943 to 1945 and, apart from a spell for radar training in Britain, Stevenson remained in her and was onboard at the Japanese surrender in Tokyo Bay on September 2 1945. There, for two weeks, he aided the repatriation of Australian prisoners of war and visited Nagasaki, which had been bombed a few weeks earlier. He confided to his diary: “God what a mess. A stirred up desert. The hills overlooking the town have all been scorched black … ships were sitting on the bottom … No smoke from the chimneys, no sign of life.”

He was also distressed by the condition of the Allied prisoners: “A horrible sight they were, all on the level of starvation and sickness and death … in desperately bad shape; many, many were just about to die and did die. Many just surviving and so utterly thrilled to see us with lots of weeping and wailing and happiness.”
Postwar, Stevenson visited Britain again for courses in navigation and fighter direction, and served in Royal Navy ships in the Indian Ocean, Persian Gulf, Atlantic Ocean and Mediterranean, and also saw operational service during the Malayan Emergency.

As a lieutenant-commander he returned in 1950 in the aircraft carrier Sydney to Australia, to take command of the training ship HMAS Barcoo.

He next served in the heavy cruiser Australia as navigator before re-joining Sydney as the fleet navigation officer. When Sydney visited Portsmouth for the Queen’s Coronation, Stevenson commanded the RAN detachment at the march-past in London.

In early 1954 Sydney conducted a post-armistice patrol in Korean waters, and in June 1954 Stevenson was promoted commander.

In 1954 Stevenson was Director of Plans in the Australian Navy Office, and during the 1956 Olympic Games in Melbourne he was naval equerry to Prince Phillip. He commanded the destroyer Anzac in 1957 and 1958, then studied in the US for a year before being appointed the defence attaché in Bangkok.

As a captain, Stevenson commanded the shore establishment HMAS Watson, the destroyer Vendetta and the fast troop transport Sydney, which ferried Australian troops to Borneo during Konfrontasi, the struggle between Malaysia and Indonesia.

In 1965 he was Naval Officer in Command, Victoria, and in 1966 he became Australian naval attaché in Washington, returning to Australia to take command of the aircraft carrier HMAS Melbourne.

On leaving the RAN, Stevenson worked for the Australian Gas Light Company from 1970 until 1987, and on retirement he settled at Burradoo, New South Wales.
He married the American actress and television presenter, Joanne Duff, in 1958. While he bore the humiliation of the Melbourne affair uncomplainingly, Joanne campaigned vigorously on his behalf. She wrote two books in his defence: No Case to Answer in 1971 and, when more information came to hand, in 1992 she published In the Wake: The True Story of the Melbourne-Evans Collision, Conspiracy and Cover-up.

His wife died a few months before Stevenson received in December 2012 an apology from the Australian defence minister stating that he had not been treated fairly by the government of the day nor by the Royal Australian Navy after the events of more than 40 years before, and describing Stevenson as “a distinguished naval officer who served his country with honour in peace and war”.

Stevenson was appointed a member of the Order of Australia in 2018.