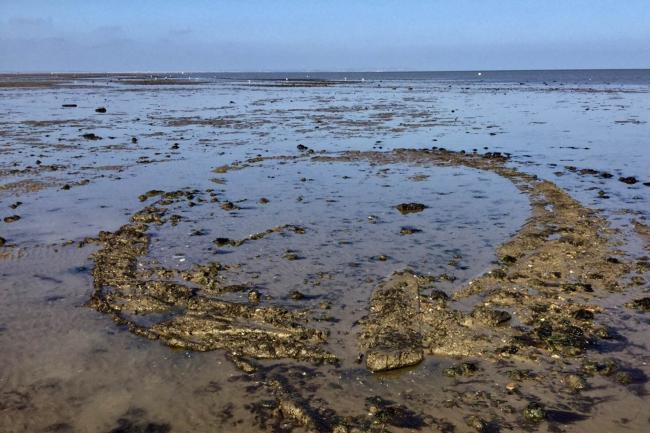 In April 2017, a group of volunteers from a local history and archaeology society looking for evidence of demolished World War II pillboxes in tidal areas discovered a wreck on the foreshore at Tankerton Beach. The wreck is exposed in mudflats when the tide is low.

Historic England commissioned Wessex Archaeology, assisted by volunteers from Timescapes to survey the exposed remains which measure 12.14m long x 5m wide. Two trenches that were excavated revealed the presence of well-preserved hull timbers from the keel up to the turn of the bilge, where the bottom of the ship curves to meet the vertical sides.

Dendrochronological sampling has revealed that one oak plank is of southern British woodland origin with a felling date of AD1531. Three other oak samples were tentatively dated to the 16th century, with elm, larch and beech timbers. The construction of the hull suggests that the ship is a late 16th century, early 17th century carvel-built single-masted merchant ship of 100-200 tons.

The proximity of the wreck to a well-known copperas works provides some context for the wreck. Copperas, also known as green vitriol - hydrated ferrous sulphate, was largely used in the textile industry as a dye fixative and in the manufacture of ink. Copperas works are known at Whitstable from 1565 and it is possible that the Tankerton Beach wreck was engaged in transporting copperas before being abandoned at the coast edge in an area of what was once tidal salt marsh.

The Tankerton wreck has been given protection because it is the only known surviving Medieval shipwreck in south-east England. It gives us evidence of Tudor/early Stuart shipbuilding techniques and the late Medieval copperas industry along the north Kent coast.

The wreck has been known about among locals for many years, however, members of Timescapes, a local history and archaeology society came across the wreck whilst conducting a separate survey and determined that the timbers were of a significant age and alerted maritime specialists at Historic England.

Since then, the wreck has been surveyed and assessed by Wessex Archaeology, with the help of Timescapes volunteers, in October 2017 and dendrochronology samples were collected by University of Wales Trinity St David in order to establish a relative date of the vessel. It was decided that further investigation and excavation was needed to support the scheduling of the wreck based on the suspected 16th-century date.

Excavating a beach wreck
The most recent series of excavations took place between the 11 and 19 July 2018 at low tides during daylight when the wreck was accessible from the foreshore. 14 low tides were worked in total, with the earliest being at 4am. A pre-disturbance survey was made of the wreck on the first day before any work took place. Excavation could then commence with the removal of sediment from within the wreck to expose the timbers that had been preserved within the London clay. Sediment samples were taken in significant areas of the wreck in the hope that they will provide further information once processed. 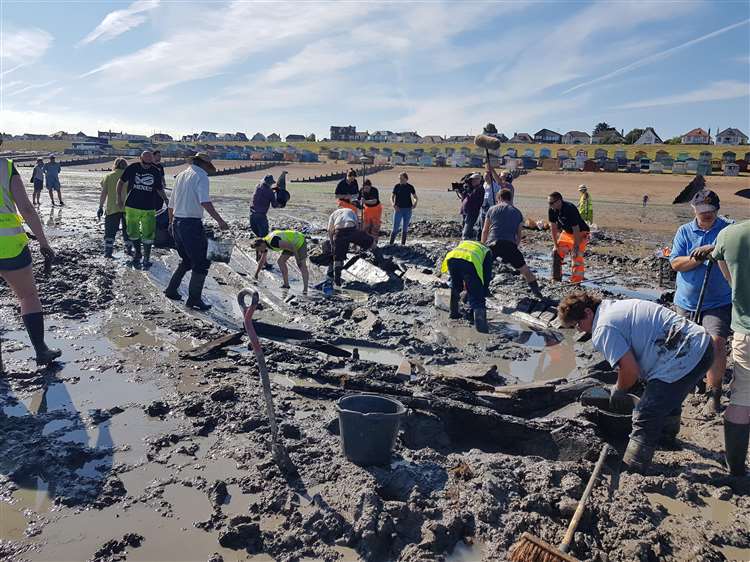 Tom Banbury, one of the volunteers was on site at every opportunity to take high quality aerial photographs with a drone, which gave a new perspective to the wreck and was a good way of seeing the extent and development of the excavations taking place.

New areas of the wreck were excavated and revealed at every low tide. Once they were cleaned of any residual sediments, they were recorded through measurements and photography with scales. Dr Rod Bale, from the University of Wales Trinity St David was on site at all times to select relevant samples for dendrochronological analysis. Towards the end of our time on the wreck, ceiling planks, framing planks, and timber knees were exposed and the keelson that runs along the length of the vessel was uncovered.

On the last day, the wreck was reburied in the clay to preserve the timbers and to minimise the impact that the marine environment can have on the structure. During the excavation, some beautifully preserved finds were discovered in the clay within the vessel including leather shoes complete with stitching, a wooden spoon, a small pulley and a fragment from a structure that is believed to be part of the galley. All the finds are now with specialists for analysis and conservation. Environmental samples were also taken during the excavations to be assessed by the team of specialists at Wessex Archaeology. Processing has already begun and have produced some additional finds including a plum stone.