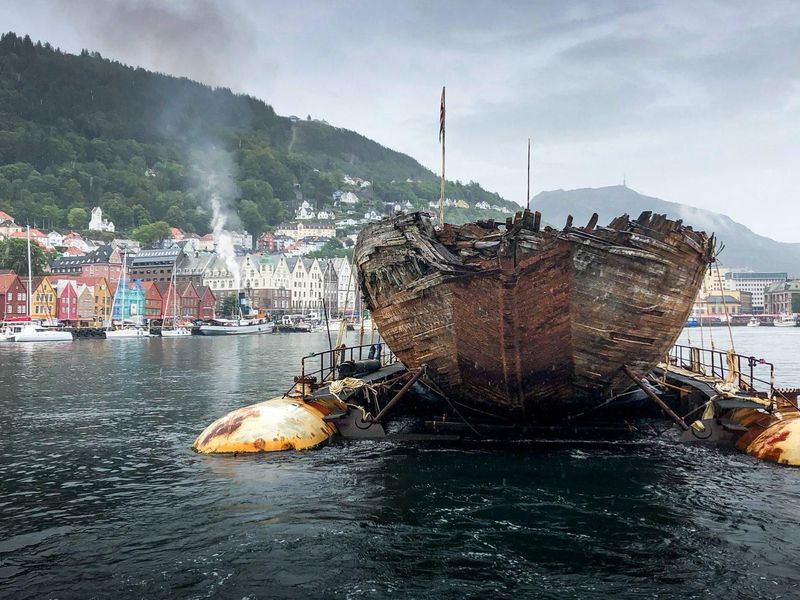 By the year 1917, Norwegian explorer Roald Amundsen had already conquered the South Pole and Northwest Passage, establishing his reputation as a Polar powerhouse. But he wasn’t just about setting records—he was also interested in science and wanted to gather data on the Arctic Ocean and polar ice. To that end, he had a polar research vessel, which he named Maud after the queen of Norway, built hoping to drift it over the North Pole. Now, reports the AFP, that ship has finally returned to its home port in Norway.

Because World War I made crossing the Atlantic hazardous, the handful of travelers who embarked upon the 1918 voyage decided to try to reach the pole via the Northeast Passage, a route passing north of Europe and Russia. But the trip, called the Maud Expedition, did not start well. That first winter, Amundsen fell through the ice, broke his arm in two places, was attacked by a polar bear and almost died from carbon monoxide poisoning. Ice conditions proved worse than the crew had anticipated, and it ultimately took the ship three years just to make it to Nome, Alaska.

From Alaska, the idea was to drift the ship over the North Pole, but poor ice conditions ultimately forced Maud south to Seattle to undergo extensive repairs. Once Maud was repaired, rather than try to ice drift again, Amundsen got distracted by the idea of flying an airplane over the North Pole and instead used Maud to haul aircraft to Alaska for the attempt. It never worked out, and by 1925 Amundsen was broke and forced to sell the ship to the Hudson’s Bay Company. The firm rechristened it the Baymaud and used it as a floating warehouse and later a radio station, one of the first in the Arctic, before the ship sank in the pack ice in 1930 in Cambridge Bay, Nunavut.

In 1990, Asker County in Norway, where the ship was constructed, bought the wreck from the Hudson’s Bay Company for just $1 with plans to raise the ship and move it home. But those plans, and several other schemes for getting the ship to Norway fell flat. In 2011, Canada decided it wanted to preserve the ship as a historic site itself since it had importance in the history of its Arctic regions. But before it could be given back to Canada, Asker launched one more attempt at getting it home, transferring the project to a private company called Tandberg Eiendom, which got things moving.

After several years of preparation, the ship was raised from the seabed in the summer of 2016. In 2017, the crew worked to prepare and stabilize the ship for an Atlantic crossing, towing it to western Greenland. According to the Maud Returns Home project’s Facebook page, the ship began its final journey to Scandinavia in June, reaching the waters of Norway on August 5 and finally making it to Vollen in Asker, where it will have its own museum, on August 7.

“It feels absolutely fantastic to know that Maud is finally back in Norway after nearly 100 years,” Jan Wangaard, manager of the project, tells The Local.no. “It brings joy to our hearts to see Maud, still proud after all these years, see her old homeland once again.”

Amundsen’s two other ships, the Gjoa and Fram are currently housed at the Norwegian Maritime Museum in Oslo. Maud didn’t accomplish her primary mission, but the oceanographic info the ship’s crew collected and its role in the development of the Canadian Arctic are still significant. And while Amundsen never managed to drift over the North Pole with Maud, in 1926 the explorer did at least get to fly over the pole in a dirigible.