Russian Shipwreck Allegedly Carrying $130 Billion in Gold Has Been Rediscovered 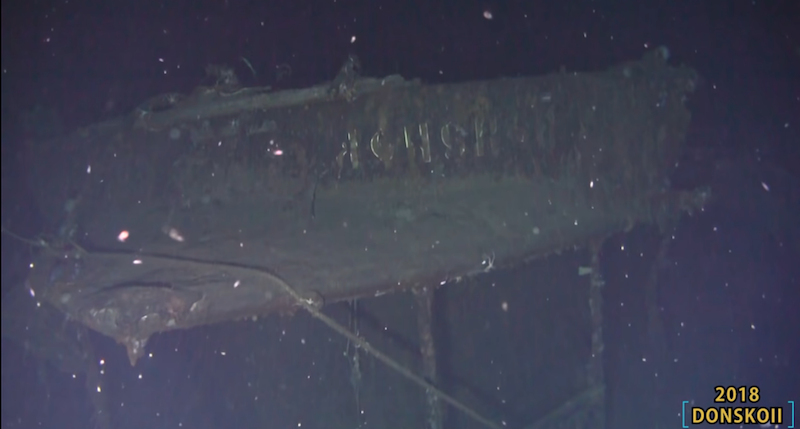 A salvage company has located the remains of a Russian warship lost during the the Russo-Japanese War. The battle-damaged cruiser Dmitrii Donskoi was scuttled off the coast of Korea in 1905, reportedly carrying a cargo of gold worth an estimated $130 billion in today’s dollars. An international consortium of companies plans to salvage the gold.

According to the Telegraph, the Donskoi was found less than a mile off the coast of Ulleung island, at a depth of 1,423 feet in the Sea of Japan. A submersible descended to the wreck and captured an image of the ship’s name on the stern in the Cyrillic alphabet. The South Korean Shinil Group, which discovered the wreck, plans to recover the gold sometime later this year with help from companies in China, Canada, and the U.K. Here's video from the moment the ship was identified.

At the time of her sinking Donskoi was reportedly carrying 5,500 boxes of gold bars and 200 tons of gold coins with a street value today of $130 billion. That’s more than twice Russia’s 2017 defense budget, which was $61 billion. If the treasure does materialize, the Russian government will receive half of the recovered amount.

The Dmitrii Donskoi was a Imperial Russian Navy armored cruiser, part of the Russia’s Pacific Fleet. Built in St. Petersburg and launched in 1883, she had four eight-inch guns, 14 six-inch guns, and four torpedo tubes. The 306-foot-long Donskoi was steam powered, driven by coal-burning boilers.

In 1904, Japan attacked Russian holdings in the Far East and the Donskoi evaded enemy contact, acting as a commerce raider. In May 1905 the Donskoi took part in the famous Battle of Tsushima, which was a decisive victory for Japan. After the battle the damaged cruiser fled north, pursued by Japanese ships. A day after the battle the ship’s commanding officer, Captain First Rank Ivan Lebedev, scuttled her off the coast of Ulleung and evacuated his crew to the island.

Although the Shinil Group claims it saw what it thinks was a “treasure box” among the wreckage, there appears to be no confirmation the Donskoi really was carrying the reported treasure. In addition to payments to the modern Russian government, the salvagers promise to further invest money in a railroad line linking North Korea, South Korea, and Russia.