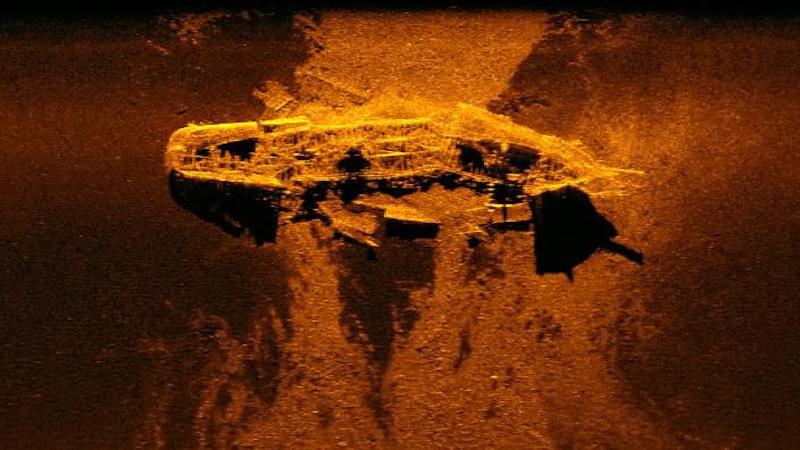 This shipwreck discovered 2300km off the WA coast during the 2015 search for MH370 has been identified as an iron sailing ship loaded with a cargo of coal.
Photo: Australian Transport Safety Bureau

While the initial search for missing Malaysia Airlines flight MH370 proved fruitless, sonar and video gathered during the hunt have shone a light on some of the secrets guarded by the sea 2300 kilometres off the WA coast.
WA Museum has analysed data taken by the Fugro Equator and Havilah Harmony in May and December 2015 while hunting for the ill-fated plane, and has identified two shipwrecks discovered as 19th Century merchant sailing ships loaded with cargoes of coal.

The museum’s maritime archaeology curator, Ross Anderson, said the wrecks lay on the sea floor 36km apart at depths of about 3700-3900m.

Dr Anderson said a combination of data from the Australian Transport Safety Bureau, historical research and maritime archaeological analysis helped identify the wrecks – one wooden and heavily degraded, the other iron, both carrying coal.

The wooden ship, with only the remains of its cargo and metal objects including fastenings and anchors still intact, would have been between 225-800 tonnes when it set sail.

“The evidence points to the ship sinking as a result of a catastrophic event such as explosion, which was common in the transport of coal cargoes,” Dr Anderson said.
“One very interesting find was a large rectangular metal object of 6m in length, which was the biggest feature discovered on the site. This was identified as a ship’s iron water tank.”

Of all that remained of this wooden sailing ship, among the most intriguing finds was this: a 6m-long iron water tank.
Photo: Australian Transport Safety Bureau

The second wreck – more intact and lying upright on the seabed – was able to be identified as an iron sailing ship with at least two decks, and would have weighed about 1000-1500t.

“Historical research into all 19th Century merchant ships that disappeared in international waters is incomplete so we cannot conclusively determine identity of the individual ships,” Dr Anderson said. “However, we can narrow the possibilities to some prime candidates based on available information from predominantly British shipping sources.”

It was likely both ships would have had between 15 and 30 men as crew, and it was also known for captains to travel with their wives and children on international voyages.
“For the wooden ship the brig W. Gordon and the barque Magdala are two possible candidates,” Dr Anderson said. “For the iron ship the barques Kooringa (1894), Lake Ontario (1897) and West Ridge (1883) are possible, with the West Ridge best fitting the evidence.

“Then, as now, the disappearance of so many lives would have had a devastating impact on maritime families and communities.”