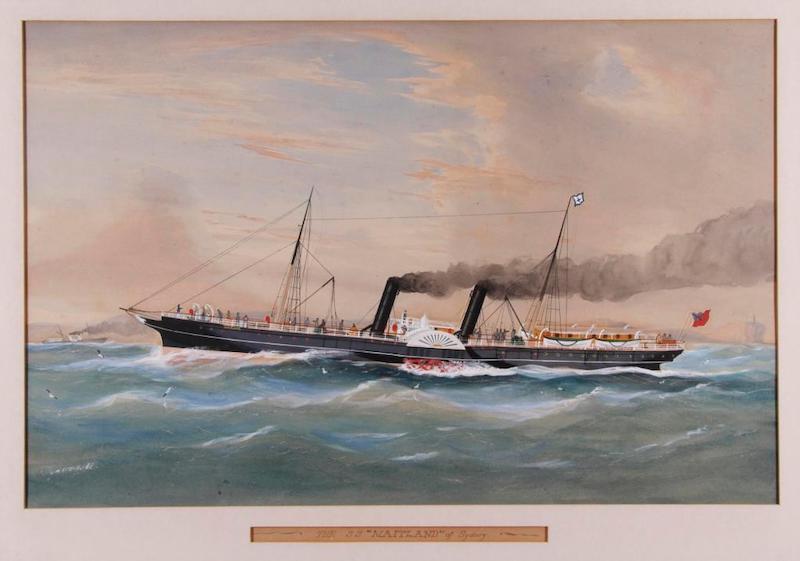 With Captain Richard James Skinner behind the wheel, the 880 tonne paddle steamer left its dock near Market St in what is now Darling Harbour at 11pm on May 5, 1898 bound for Newcastle.

No sooner had it passed Sydney Heads than the iron ship, with 36 passengers and 32 crew, was beset by ferocious winds and wild seas.

A huge wave tore off one of its paddle housings, ripping a hole through the hull and sending water flooding into the boiler room.The crew bailed for hours and when the coal got wet they started burning wood and kerosene to keep the steam engine firing.

Realising there was no way through the tempest Capt Skinner turned back for the relative shelter of Broken Bay but by 5am the following morning the engine was swamped.

Forty-five minutes later the stricken ship crashed against a rock shelf at what is now Bouddi Point with such force it ripped in half — the bow quickly disappearing beneath the waves.

Crewman William Williams tried to swim ashore and secure a line but he was quickly lost. Seaman Anderson made the second attempt but the rope got fouled on rocks and he was washed ashore. A passenger named John Russell and two crew made a third attempt and while he made it to shore the two crew perished.

For hours the remaining passengers and crew who had not been washed overboard during the grounding made the perilous crawl along the rope.

All the while they were bashed against the rocks by waves and the howling wind until the rope snapped with four clinging to it — two were drowned but another two were washed ashore.

The Captain and four other men remained on the ship comforting a one-year-old baby named Daisy Hammond who’s mother had made it to shore but was told it was too dangerous to take the child.

The following day Mr Russell, of Newcastle, risked his life again to secured another line and the remaining souls including baby Hammond were saved.

It would be days before rescuers arrived and in the days that followed hundreds of people travelled over the rugged headland to see the wreckage and loot the cargo and debris which littered the beach up to 1.8m high in places.

Many of the 83 kegs of beer washed ashore, along with whiskey. “And it was not long before a sad spectacle was made extremely sadder by the riotous revelry of a drunken mob,” the G osford Times published on May 13, 1898.In another incident a police officer asked some men to help him carry the dead, also washed up with the flotsam, back to a house but they ignored him for the “beer, glorious beer”.

Young Daisy grew up and moved to Canada where she married but returned to visit in the 1970s before her ashes were scattered into the sea — as per her dying wish — by Reverend Michael Chiplin in 1988. She was 90.

The isolated beach then known as Boat Harbour was changed to Maitland Bay and the storm dubbed the Maitland Gale.

The Maitland Gale claimed a number of other ships that night including the barque Hereward, which was washed ashore on Maroubra Beach but no one was lost.

Source: dailytelegraph.com.au from the book ‘Wreck of the Maitland” by Geoffrey Potter