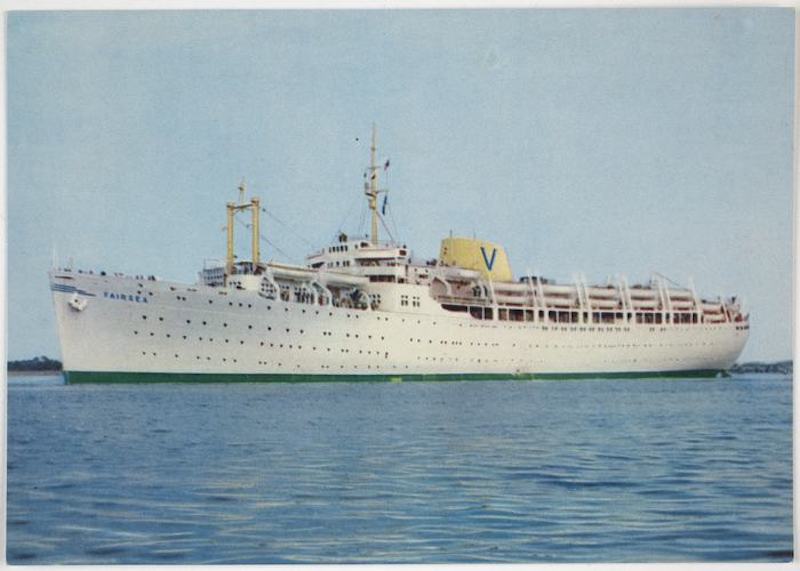 The Fairsea made several journeys to Australia under the International Refugee Organisation (IRO) from 1949 to 1951, carrying displaced persons affected by World War II. She was later chartered by the Australian Government to transport assisted immigrants from Britain and also New Zealand.

The Fairsea holds an important place in the memory of many immigrants to Australia during the post World War II period.

She was the first passenger ship of the famous Sitmar Line and the first non-British ship employed to carry assisted immigrants from Britain to Australia. The Fairsea was a regular sight in Australian waters and made a total of 81 voyages to and from Australia between 1949 and 1969.

In her earlier years, the Fairsea seemed stark and uninviting for some, but after renovations, her later voyages were often remembered with delight and a sense of adventure.

History of theShip
Originally named Rio de la Plata, the immigrant ship Fairsea was built for the American shipping company Moore-McCormick Line for their passenger and cargo service between New York and the east coast of South America. However, she never served on this intended route, for upon her launch in 1941 (amidst World War II), she was converted into an escort aircraft carrier and commissioned into the Royal Navy as the HMS Charger.

Soon after, she returned to American hands and served for four years in the pacific as USS Charger.

After a brief post war period as a troop carrier, the Fairsea was rebuilt for migrant service in 1949, providing very basic accommodation for 1,800 passengers with the intention of transporting displaced people and refugees from Europe to Australia.

She laid in wait for a short time while a contract was obtained from the International Refugee Organisation (IRO), before beginning her life as an immigrant ship.

Immigrant Ship to Australia
The Fairsea made several journeys to Australia under the IRO from 1949 to 1951, carrying displaced persons affected by World War II. She departed Naples, Italy for her maiden immigrant voyage to Australia on 11 May 1949, reaching Melbourne on 9 June. She regularly travelled to Australia from Italy carrying refugees and displaced people, but always returned empty due to the restrictions of the IRO contract.

In 1952, when the IRO contract ended, Sitmar took advantage of the lucrative Australian trade and began to offer paid passage to Australia on the Fairsea. She made a number of these trips over the next few years, except for a brief period in 1953, when she was transferred to the Quebec route.

In 1955, the Fairsea was chartered by the Australian Government to transport assisted immigrants from Britain, which she continued to do until an extensive refit in late 1957. The new configuration provided modernised accommodation including air conditioning throughout, an additional deck and new public rooms, considerably changing her external appearance and internal accommodation.

The Australian Government charter was renewed and she continued operating as an immigrant ship, also making voyages to New Zealand.

Passenger Experiences of the Journey  Before the 1957 refit, the minimal conditions of the Fairsea were not lost on her passengers - many immigrants remember the large open dormitories and stark surrounds.

Frank Kriesl migrated from Hungary in 1951:
The Fairsea was huge, a converted troop ship with no cabins, just huge big open spaces with triple decked bunks, so cramped you couldn't sit up straight in them. Men were assigned to one section, women to the other. The toilet and shower facilities were one huge long one . and everywhere you went there was an awful reek of 'White King'. People threw up because of the smell not just the swell!'.

Different voyages created a variety of different experiences. For some passengers, the journey on the Fairsea was an adventure.

Doreen Hakowski (formerly Sillett) migrated from England in 1956:
'The Fairsea - our home for 5 weeks, was the best part of my early life. I had been born in an air-raid shelter in London, so only knew destruction around me. My trip was very exciting. We had lovely meals, dances, entertainment, deck games, swimming and many other pastimes. We stopped off in Aden and rode a camel through the streets. I can't even remember feeling sad at leaving my home country, England.'.

Her Final Voyage In 1969 while west of Panama, a fire broke out on the Fairsea, completely damaging the engine room. The decision was made that it was not economical to repair a ship that was already 28 years old and so on 9 July 1969, the Fairsea left Balboa bound for the shipbreakers at La Spezia, Italy.