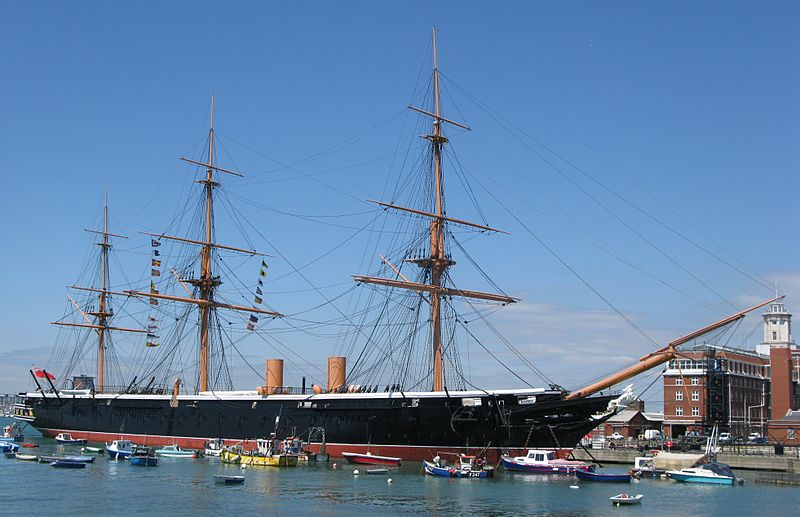 HMS Warrior - A revolutionary warship - quickly overtaken by even newer developments The HMS Warrior was the world's first iron-hull, armor-plated warship. It was also one of the largest ships of its time when launched in 1860. Iron hull ships were relatively new when the Warrior was built. Likewise, armor-plating had been brought into limited use on warships (and would soon see service on both the Monitor and the Virginia, nee Merrimack, in the American Civil War). But no warship had combined both technologies. The Warrior was rushed into development in reaction to the construction by the French Navy of the ironclad warship La Gloire. The La Gloire represented an attempt by the French Navy to achieve parity with the Royal Navy. The Warrior was built to put an end to that dream. It was twice the size of the La Gloire and had superior speed, armor, and weaponry. Built as a full-rigged ship of the line, the Warrior also had a powerful steam engine driving a screw propeller. Its top speed under steam (14.5 knots) exceeded its design speed under sail. The Warrior set off an intense competition between various navies of the world to build more powerful warships. Ironically, the Warrior never saw combat. It was relegated to the First Reserve Fleet in 1875 a'd served as a guardship until 1883. The Warrior was used for a while as a depot ship and then in a support role at the Royal Navy抯 torpedo training school. The final ignominy came in 1929 when the once proud warship was converted into a floating oil jetty. Finally, in 1968, through the leadership of the Duke of Edinburgh, the Maritime Trust was established. Its first mission was the acquisition and restoration of the HMS Warrior. Formal restoration began in 1979 and was completed in 1987. The Warrior is now berthed in Portsmouth as a museum ship.
Source : Maritimeproffesional