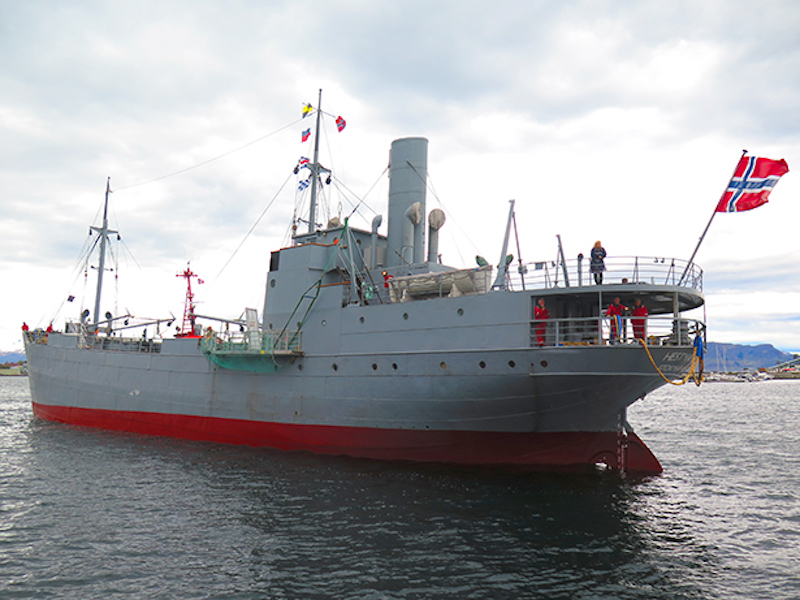 The cargo ship DS HESTMANDEN was built in Bergen for Vesteraalens Dampskibsselskab (VDS) and launched in 1911.  The ship, which took part in both world wars, sailed in British waters, and for most of the time for British charterers. Despite Norway’s neutrality in World War I, more than 130 Norwegian ships were requisitioned by Britain in 1917. Among these was DS HESTMANDEN.

The ship survived the war in spite of dramatic episodes by German attacks. She was redelivered to her Norwegian owners in February 1919 and resumed service in the Norwegian coastal trade.

DS HESTMANDEN was on the edge of being taken out of coastal trade at the outbreak of World War II in 1939.  With the German invasion of Norway on April 9 1940, DS HESTANDEN left for Britain on June 7, the same day as the Norwegian King and Government left Norway.  The ship became part of the Norwegian Shipping and Trade Mission (Nortraship) which administered the Norwegian merchant fleet outside German-controlled waters. The fleet consisted of more than 1000 ships and DS HESTMANDEN is the only one that still exists today.

Apart from a trip to Iceland, the ship sailed in British coastal trade throughout the war experiencing hard times and with narrow escapes from German attacks.

With the close of the war, the old steamer returned to Norway in June 1945 in worn-out state.

Despite economic challenges following the war, the HESTMANDEN underwent extensive repairs and refurbishing, including re-fitting her coal burner under the kettle to an oil fuel one.  For the next twenty years, she remained active in coastal trade and in recovery operations of German ships sunk during the war along the shores of Norway and Sweden.

Following an inactive period of some fifteen years, the rapidly decaying ship was bought in 1981 by the veteran ships’ club in Norway,Norsk Veteranskibsklubb, who managed to fund a preservation project whereby the ship was dry-docked and the hull sandblasted, primed and painted.

In 1992 she was towed to Kristiansand and a full restoration was undertaken, greatly assisted by the Norwegian Directorate of Cultural Heritage.  After the most extensive ship restoration project ever in Norway, and by far the most expensive one, DS HESTMANDEN is now the official status as the National War-sailor Memorial Monument by the Norwegian government.

Vest-Agdermuseet is a consolidated organisation consisting of several sites and museums. The Museum’s general director is John Olsen.